by Phil Butler, …with New Eastern Outlook, Moscow,…and the Institute of Oriental Studies of the Russian Academy of Sciences, a research institution for the study of the countries and cultures of Asia and North Africa.

[ Editor’s Note: Phil takes us down the rabbit hole of the enduring Zionists’ holocausting of the Palestinians while effectively claiming that they are doing it only for defensive purposes. But one only has to scratch the surface of the archival history to find that international Judaism did not buy the ‘defensive’ rationale for the misfortunes of Jews that suffered in WWII.

And to this day many deny, by overt omission, that the real holocaust of WWII was the estimated 50 million who perished. To your hardcore Zionists, the goyim victims just get sent to the back of the bus with the Talmud’s blessing, on the grounds that they are not ‘real people’…nasty, nasty.

If Jews were ever to be found in a ghetto anywhere on the planet being treated like those in Gaza, the howl would be heard around the world, and rightly so. How sad it would be if all they heard in return was “Remember Gaza, remember Palestine… Jim W Dean ]

In 1958 the novelist Leon Uris wrote a stunning novel entitled “Exodus”, about the establishment of the Jewish state in Palestine after World War II. In 1960, the legendary director Otto Preminger made the film, which starred Hollywood icon, Paul Newman. 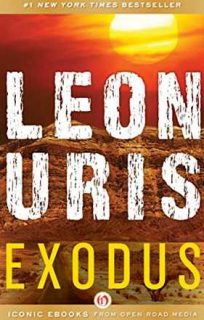 I saw Exodus when I was six years old, and the impact of the story of those brave people walks with me still. Sadly, what the state of Israel has become since then, seems a warped and cruel metamorphosis.

The sympathy and goodwill toward the cause of Israel that Exodus helped cultivate in America and elsewhere in the world, has been convoluted into contrived obedience, to whatever expansive goals the Israeli leadership can contrive in Jerusalem, and Washington.

Truly, the prophecy of film critics like the legendary Richard L. Coe of The Washington Post has been used to stamp out other peoples’ rights. Coe commented on Exodus back then, saying that the film:

“…has this vitality of the immediate and will be of incalculable influence in reaching those unfamiliar with the background of Israel … It is safe to say that in several years when this film will have played much of the world, its influence will have become critical.”

By now we are all familiar with both the Israeli and the Palestinian questions. We all know that Israel and Iran are bitter enemies. And we are aware that in the burning cauldron of the Middle East, there are two kinds of nations and two kinds of people.

There are nations (and sometimes people) on fire because they are real or perceived foes of the Israelis. Then there are those enjoying moderate peace because they abide, as a people or individuals, with everything the Zionists want.

And anyone who does not abide, personally or officially, is branded with the white-hot iron of Zionist fury. Anti-Semite, this is the public relations brand stuck on anyone questioning the genocide in Gaza. Now, enter Russia and her role. Russian Ambassador to Israel Anatoly Viktorov told the Jerusalem Post some days ago:

“The problem in the region is not Iranian activities. It’s a lack of understanding between countries and non-compliance with UN resolutions in the Israel-Arab and Israel-Palestinian conflict.”

Arabs, at least the ones still clinging to their identity, deem Israel a state governed by nationalism and racism, and with hatred and contempt for Arab life. Arab leaders not in the stable of pro-Zionism, say the country is a security cult obsessed with occupying what’s left of Palestine.

Every time I study the situation, I ask myself; “Are these Arabs being unfair?” And immediately my mind races past images of Paul Newman and Eva Marie Saint, burning fires in the cold nights of the desert, from the great film no one could ever forget. This is the reality of the Israeli cause, and the unshakable power of a very few, to rule the majority.

Gideon Levy of Haaretz is Jewish, and he agrees with me. But he is accused of being a Hamas propagandist. Ironically, astoundingly, his father could have been the real-life inspiration for Exodus the film.

Heinz (Zvi) Loewy, escaped the Nazis and joined 800 other Jews on an illegal vessel bound for Palestine. He and his fellow refugees were strafed by RAF planes, interned in a Lebanese prison camp, and finally reached Mandate Palestine when their ship ran aground at Tel-Aviv’s Frischman Beach.

Yes, the kaleidoscopic of human passion and impression left by Preminger’s film masterpiece, was meant to burn another idea into our hearts and heads. The “Israel” America has defended for decades, seems to have been replaced with an evil imposter.

This occupation has been in effect for over half a century, and it is characterized by the systematic and diabolic human rights violations waged against the civilians of Palestine. The home demolitions, the torture, the night raids, and the abductions and imprisonment of children are a matter of record, not some “fake news” concoction to sway the public.

On any given day an image of harassment at checkpoints, more dead or maimed civilians or the destruction of agriculture play out on the frontiers of the Jewish state.

Uriel Abulof, a professor at Tel-Aviv University’s School of Political Science, Government and International Affairs catalogs what’s going on in Israel in “Netanyahu’s fearmongering is working. Israelis have forgotten how to hope”, a report about a master propagandist, Israel’s Prime Minister.

And Israeli writer Ayelet Gundar-Goshen calls Netanyahu a “deadly storyteller” brainwashing young Israelis into believing the Palestinians are a cross between Hitler and the Egyptian Pharoah. And Netanyahu has helpers, powerful helpers.

Natan Sachs and Kevin Huggard at Brookings Institute just wrote a report outlining how “threats” loom large over a “confident” Israel right now. “Israel in the Middle East: The next two decades” helps Netanyahu storytelling by not only outlining the “great powers” as significant variables for Israel, but they throw in climate change to strike more fear into hearts.

And in a Washington think tank sequel to Exodus, poor little Israel could owe its fate to “a dominant external power indifferent to its core interests.” As if Netanyahu’s benefactors do not have fingers on the pulse of every militarized nation.

Finally, Israel, the modern one that is, getting what its leadership wants is paramount in Washington. The Harvard Belfer Center report, “Russia Analytical Report, Dec. 7-14, 2020”, outlines for the Kremlin and everybody else, how Syria can be put back together again if everybody gives in to Zion. And I quote:

“The United States can press Russia to help remove Iranian forces and their affiliated militias from areas along the Euphrates River valley and from areas within striking distance of Israel. In exchange, Dent and Tabatabai argue, it can offer to cede to Moscow areas that are not important to the United States but that Russia deems critical to its objectives of reestablishing the Assad regime’s control over all of Syria, such as the US base in al-Tanf.”

My final question is; “Why can’t the US and Russia broker a deal that puts Syria and Lebanon back together, lets up on the Iranians, and creates a peace in Palestine where Israel lets well enough alone?” It’s just ridiculous, to me and others, how a new detente based on reality and alternatives cannot be struck.

Every outcome proposed by Israel’s leaders is overkill in favor of extreme nationalism and racism. Total domination seems to be the only compromise Netanyahu and the others want. And with every Gaza child malnourished, bombed, or dead, the heart-rending imagery of Exodus hardens into hate.

The only thing that can ultimately create peace in the region, is compliance with UN resolutions in the Israel-Arab and Israel-Palestinian conflicts. The Jews who escaped the holocaust certainly never envisioned their ultimate homeland as the scourge of the modern world. And this is not Anti-Semitism, this is a heartfelt fear for a great people.