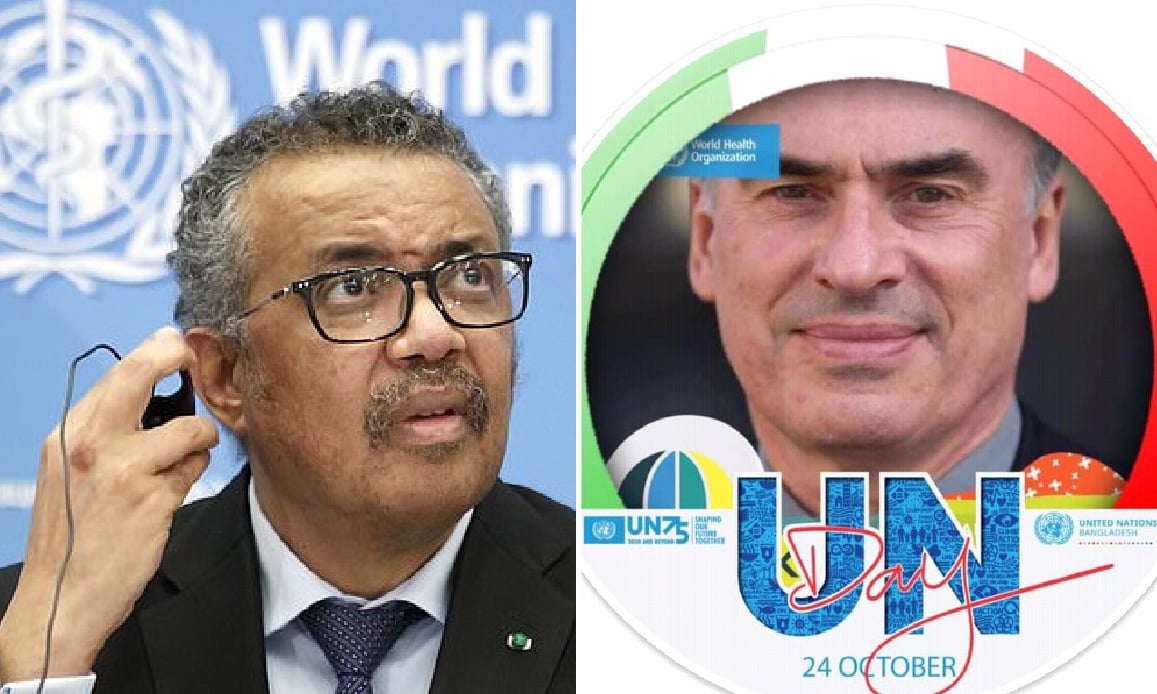 In the WuhanGates reportages n. 24 and 28 we narrated the curriculum of the two most important exponents of the World Health Organization, the director general Tedros Adhanom Gebreyesus, defined a “criminal” by the national army of Ethiopia for his loyalty to the guerrillas of the TPLF, and his assistant general Ranieri Guerra, former director of the Ministry of Health in Italy and now a leading member of the Government’s Technical Scientific Committee accused by Codacons of being in conflict of interest due to his past as director of the foundation of a famous Big Pharma vaccines.

Now it is clear that the WHO itself has warned all its collaborators in Italy not to appear and not to collaborate with the magistratutura that in Bergamo is investigating for a culpable and false epidemic in relation to the suspected death of citizens reported by the Noi Denunceremo (We denounce) association, established by relatives of the victims of the infection. It then urged them not to reveal the truth they knew about the pandemic …

The issue concerns the pandemic emergency plan that Italy would never have updated, finding itself unprepared not only in the health strategy but also in those obligations to stock protective and antiviral masks that should have been provided for by law.

The Prosecutor’s Office of Bergamo is investigating the matter, a province where there was one of the most serious massacres in Italy due to Covid-19, which however had difficulty in collecting information from the World Health Organization precisely because Tedros headquarters from Geneva was ordered not to report to the magistrates using diplomatic immunity.

The newspaper Il Giornale has published the full text of the email sent by the WHO to its collaborators including the researcher Francesco Zambon who published a study on the absence of an updated pandemic plan subsequently retransmitted by the WHO itself as revealed by the investigation of the television broadcast Report of national TV RAI3.

Before reading the disturbing email with which the World Health Organization invited its collaborators NOT TO COLLABORATE WITH THE ITALIAN JUDICIARY, let’s see the testimony released by Dr. Zambon who decided not to use diplomatic immunity and tell what he knows to the magistrates .

“Ranieri Guerra repeatedly, both by email and by phone – says Zambon – asked me to change the date of the Italian pandemic plan. He wanted me to write in the report that the plan, since 2006, had been updated, using the very words updatedand reconfirmed. In consultation with all the authors of the report, we absolutely decided that we could write reconfirmed because in fact it hadn’t changed even one iota since 2006, but we certainly couldn’t write updated that is updated. This would have been false and I not me I felt it “.

Guerra, for his part, intervened in Massimo Giletti’s TV show Non è l’Arena, claiming that he only asked for some corrections and a postponement of the publication so as not to surprise the Ministry of Health. But Zambon declares much more disconcerting things (as reported by Il Giornale).

«Ranieri Guerra telephoned me and told me that he was at the door of the general manager and that if I had not changed the text as requested, he would have said that I was behind the episode of Report that was accusing the WHO. But I knew absolutely nothing about the episode of Report that evening. And only, then looking at it, I understood why: heavy accusations were made about the links between China, Ethiopia and other things and there was also a part dedicated to the pandemic plan. In Geneva there was a great apprehension about the investigation and therefore Tedros certainly knew it too, which obviously would have put me in an extremely difficult position, I could be fired at any time ».

As part of the investigation for a culpable epidemic and false, the magistrates of Bergamo in recent weeks summoned the WHO representatives including Zambon himself who initially did not present himself, citing diplomatic immunity as a justification as requested by the WHO.

Here is the burning email published by Il Giornale in which the UN health agency invited its Italian collaborators not to respond to the request of the Public Prosecutor’s Office.

«Please do not respond to the convocation of the judicial police section of the Guardia di Finanza (Italian economic police) and send us the request received from the prosecutors without delay so that we can attach this request to our letter to the Public Prosecutor and the Ministry of Foreign Affairs» reads the email of the WHO in possession of the AGI (Agency Journalistic Italy), dated 1 November 2020.

To sign the letter would be the head of the WHO Europe legal office, Chantal Streijffert Garon. “It is important to note – we read – that there are several ongoing lawsuits related to Covid-19 and numerous parliamentary inquiries involving the WHO. We must be careful not to create a precedent or implicitly renounce immunities by participating in interrogations. “

“We know that you are part of the team that wrote the report ‘An unprecedent challenge: Italy’s first response to Covid-19’, which was coordinated by Francesco (Zambon, ed). We know that the Bergamo Public Prosecutor’s Office is carrying out an investigation into the Italian government’s response to Covid-19. In this context, we inform you that WHO members and its advisors are protected by the Convention which provides for diplomatic immunity in the context of official functions performed on behalf of WHO. Therefore, members and consultants cannot be called by the courts on the basis of national jurisdiction unless the WHO renounces privileges and immunities following a request through diplomatic channels involving the Foreign Minister ”.

As Gospa News unveiled in preview, serious conflicts of interest have also emerged regarding the WHO task force appointed by the director general Tedro Adanhom Gebreyesu to investigate the origins of the SARS-Cov-2 virus: one of the components, in fact, is the financier of the dangerous HIV-infected coronavirus experiments to build chimera superviruses conducted in the laboratories of the Wuhan Institute of Virology and North Carolina University at Chapel Hill.