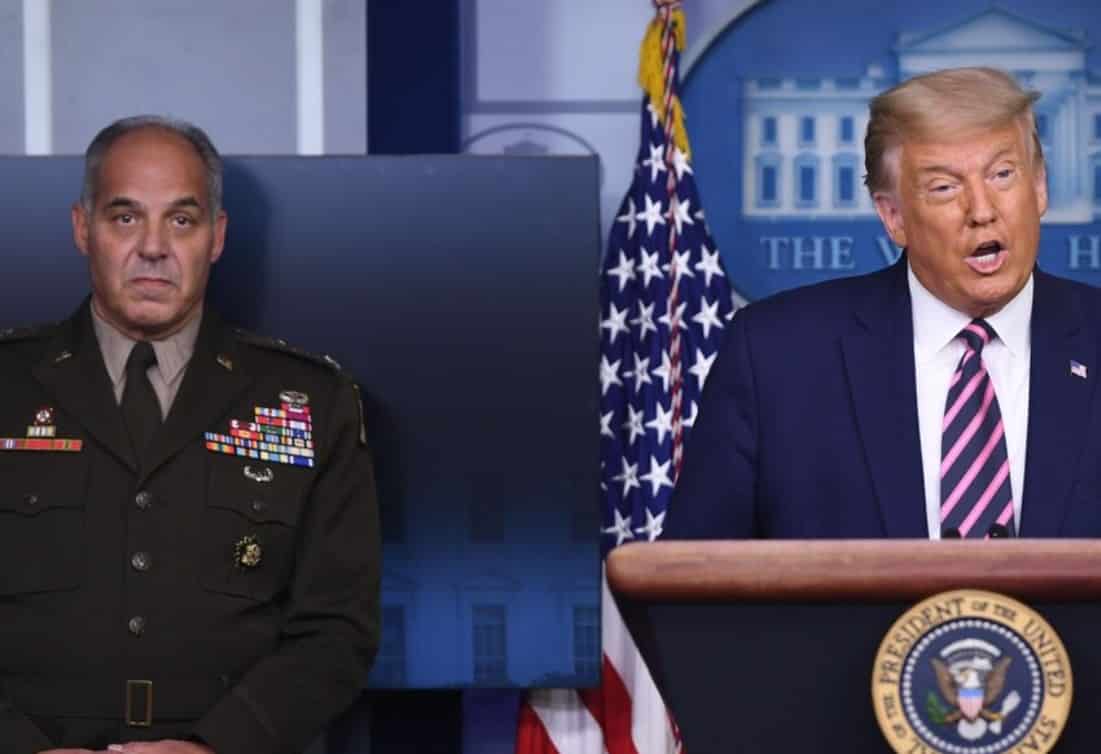 VT:  When Trump “forgot” to order enough vaccine, Pfizer went into full overtime production at their Michigan facility. Millions of doses now sit in warehouses but can’t be distributed, not to Michigan, not to Illinois, not to other Blue States as General Gustave E. Perna claims he simply “screwed up.”

There is also no evidence that deliveries of vaccine to VA facilities are moving forward either. No schedule is in place for vulnerable vets though promises have been made to vaccine VA employees and those still alive at care homes where massive die-offs have been the rule over the past year.

However, a pattern of insider trading and investment by the Trump family and key ‘big pharma’ backers tells us that this isn’t an accident.  In Michigan, millions of doses sit day after day while ICU nurses at local hospitals in Kalamazoo, walking distance from Pfizer’s massive warehouse, are told mysterious cutbacks will keep them at risk.

Trump and his goons have bought stocks, invested big time in the newly approved Morderna vaccine. The phizer vaccine was held up by Trump's stooge General Perna, today he said it was his fault. WTF he is covering up for Trump. Investigate, subpeona and have him testify under oath https://t.co/GMCUYqAKpG

Thirteen days after the massive infusion of federal cash — which triggered a jump in the company’s stock price — Moncef Slaoui, a Moderna board member and longtime drug industry executive, was awarded options to buy 18,270 shares in the company, according to Securities and Exchange Commission filings. The award added to 137,168 options he’d accumulated since 2018, the filings show.

It wouldn’t be long before President Donald Trump announced Slaoui as the top scientific adviser for the government’s $12 billion Operation Warp Speed program to rush COVID vaccines to market. In his Rose Garden speech on May 15, Trump lauded Slaoui as “one of the most respected men in the world” on vaccines.

Gen. Gustave Perna, in charge of getting COVID-19 vaccines across the United States, apologized on Saturday for "miscommunication" with states over the number of doses to be delivered in the early stages of distribution. https://t.co/eeZDnAJr1q

So General Perna is covering up for Trump administration’s purposeful “mishandling” of the Pfizer vaccine distribution. How many of them own Moderna stock? Biden needs to remove him ASAP. https://t.co/1DKoBbNgWh

Perna’s alleged error will kill up to a quarter million Americans and nothing is being done to address it.  States like Michigan that were to vaccinate their most vulnerable care home populations in January are now being told April though inventories in Kalamazoo, Michigan, withheld at General Perna’s order, could finish the task before Christmas.

Yes. General Perna promised he was ready to go. Another one of Trump's bullshit Generals.

Operation ‘Warp Speed’ is simply another con and grift by Trump, as expected.  The vaccine roll out for health care workers in states like Michigan and a dozen others, Blue States with a population equally half the US, is a carefully engineered disasters.  Whose behind it?

Must subpeonaed to testify under oath. Be indicted prosecuted and held accountable:
1. Louis Dejoy lied to Congress, sabotage the USPS for Trump.
2. General Gustsve Perna intentionally held up distribution of Phizer Vaccine. Trump has huge stock investment in Moderna Vaccine.

Pfizer has confirmed that General Perna has ‘gone walkabout’ as 100 million doses of vaccine sit in their Michigan warehouse, withheld from distribution because the Operation Warp Speed has come to a mysterious screeching halt.  Parna, Trump’s pet General, says the whole thing is a planning error…with tens of millions of doses of vaccine disappearing and distribution to Blue States being cut by 60 percent or more.

This was trump's fault- he turned down the 100 million doses from Pfizer because he benefited from Moderna. General Perna probably planned on the original expected doses. But trump never accepts responsibility. He designates who will take the blame. https://t.co/AiRtvxo0jQ

“For days, the Trump administration tried to cover up their mistakes and pushed back on the truth,” he said in a statement obtained by NBC Chicago. “The state of Illinois appreciates that the federal government has finally decided to explain what happened to the people of this nation, and we would urge officials involved in this rollout to recommit themselves to honesty and transparency.”

Trump warned us he would do this when on November 13, 2020 he promises to withhold vaccine from New York as an expression of anger at the state that is likely to put his entire family in prison. (not the little one…the tall little one)

for the government requests. So Pfizer shipments are held up until after FDA approves the Moderna vaccine and ready to ship. Generals don't make those kinds of critical mistakes, it's why they become generals. General Perna appears to be taking a bullet for Trump. Just sayin.

Michigan Governor Gretchen Whitmer issued a scathing critique of the president and accused him of “slow-walking” distribution of the Pfizer vaccine at a press conference Friday.

“There are millions of Pfizer vaccines, many right here in Portage, Michigan, that are waiting to be shipped,” Whitmer said during a news conference. “But the feds are slow-walking the process of getting the addresses to Pfizer for some reason I cannot get an answer to.”

She continued, “We have Michigan hospitals and nursing homes ready to administer this vaccine. And the bottleneck appears to be the White House. And I can’t get an answer why.”

On Thursday Washington Gov. Jay Inslee also tweeted his displeasure with the government. “This is disruptive and frustrating,” Inslee wrote. “We need accurate, predictable numbers to plan and ensure on-the-ground success.”

MiLive: Michigan is getting less than half the COVID-19 vaccine doses it anticipated this week, the result of “miscommunication” from federal officials about vaccine shipments.

The Michigan Department of Health and Human Services received 84,825 doses of Pfizer’s COVID-19 vaccine last week, and anticipated another 84,000 this week as well as 173,600 doses of the Moderna vaccine just approved by the Federal Drug Administration.

Instead, state officials have been told to expect 60,450 doses each of the Pfizer and Moderna immunizations, according to Lynn Sutfin, a MDHHS spokeswoman.

“We are working with local partners to get vaccine out into the priority groups, currently Phase 1A, as quickly as possible,” Sutfin said. “Receiving less vaccine than expected requires us to readjust distribution plans and will mean fewer healthcare workers getting vaccinated in the timeline originally planned.”

Army General Gustave Perna, chief operating officer for Operation Warp Speed, apologized to governors Saturday, acknowledging a “miscommunication” with states about how many doses of the vaccine would initially be available.

“At the end of the day, the number of doses available to us to allocate ended up being lower,” Perna said at a press briefing Saturday. “As we gave forecasts to the jurisdictions and governors and states worked their priorities against those forecasts, when we had to decide what was eventually going to be shipped out, I had to lower the allocations to meet the releasable doses that were presented to me.”