Home World Ann Coulter: “Trump would have killed us” 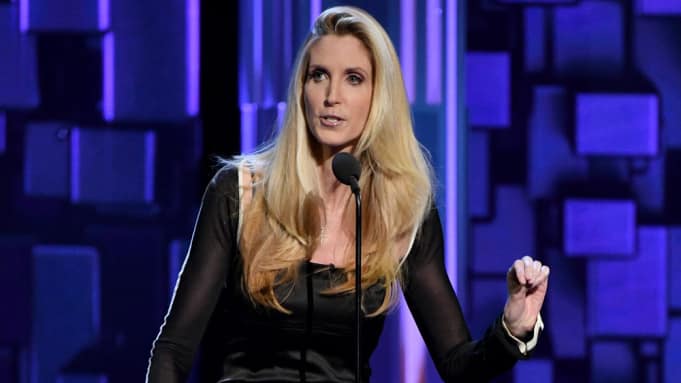 Senior Editor’s note: I have always found Coulter to be a vacuous cow trading on her ‘tranny’ looks.  The attraction of the right…MEGA billionaire dark cash, big pharma payoffs and bigot morons to buy your books…now Coulter, the biggest moron of all…is trying to profit on Trump’s crash and burn.  Coulter is like a much more manly version of Jared Kushner…check it out.

Ann Coulter, the fire-breathing Neocon pundit who once said that she wished Benjamin Netanyahu were “our president” and the author of In Trump We Trust: E Pluribus Awesome!, is now saying that a second term with Trump would inevitably lead to the deaths of Americans.

[ Editor’s Note: …meaning those who survived his first term…JD ]

Coulter previously declared that Trump somehow was “the great orange hope,” “the reality TV star we’ve been waiting for,” and then this: “I won’t stay in a world without Trump.”[1] 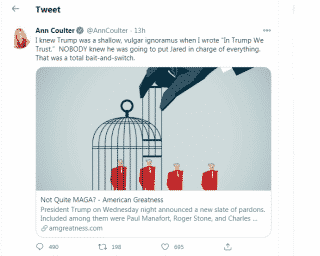 Now Coulter has a different message for America, and it’s no longer In Trump We Trust: E Pluribus Awesome! Coulter told a college crowd last November at the University of Texas at Austin:

“The reason I’m very happy that [President] Trump lost – and lost narrowly – is that a second term of Trump would have killed us. What we want, and what I think we can get in four years, is Trumpism without Trump.

“We have to take care of our own first. That’s Trumpism. And it hasn’t been tried. It certainly hasn’t triumphed. [W]ith Trump . . . He’d say these wild things that we’d get blamed for, he’d get attacked on, and then actually did nothing. Trump thinks, ‘I tweeted it. Therefore, it’s done’. Talking about it isn’t the same as doing it. Much like as he tweeted out, ‘Law and Order,’ and yet cities are still burning across the nation. [He] didn’t do anything about it. It’s like he didn’t know he was president.”[2] 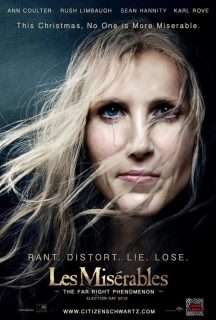 The next step for Coulter is to apologize to those who plunked down the money to buy In Trump We Trust: E Pluribus Awesome! Or perhaps she needs to refund the people who actually bought the book.

Anyway, the New York Times reported on the 22nd of this month:

“In an audacious pre-Christmas round of pardons, President Trump granted clemency on Tuesday to two people convicted in the special counsel’s Russia inquiry, four Blackwater guards convicted in connection with the killing of Iraqi civilians and three corrupt former Republican members of Congress.”[3]

“Ali Kinani’s life was cut short at nine years old in 2007, when Blackwater American security contractors opened fire without provocation in Baghdad’s Nisour Square, killing 17 people. Ali, who liked to be called Alawi, was in the back of his father’s car on the way home after picking up his aunt and cousins, on what had appeared like a normal day until the shooting started in all directions.

“Determined to bring the killers to justice, Ali’s father Mohammed Kinani moved to the United States to follow the prosecution of the Blackwater employees. On Tuesday, outgoing US President Donald Trump pardoned all four convicts. On Tuesday, the Arab American Institute said the pardons show that Trump does not value the lives of Arabs.”

This is obviously true. Imagine the reaction in America if Ali happened to be an Israeli or even an American kid. Wouldn’t CNN, the New York Times, MSNBC, Fox News, etc., beat decent Americans to death with the story? Why don’t we hear any of this in the mainstream media? And they want us to believe that they are doing the work of true journalism?

Thank God for all the people in the alternative media who are doing decent work. We wish them all Merry Christmas. In 2021, VT will continue to “drain the swamp,” fight diabolical monsters, expose those who ought to be exposed, politically castrate warmongers and profiteers, and align with the vast majority of Americans in speaking truth to power.