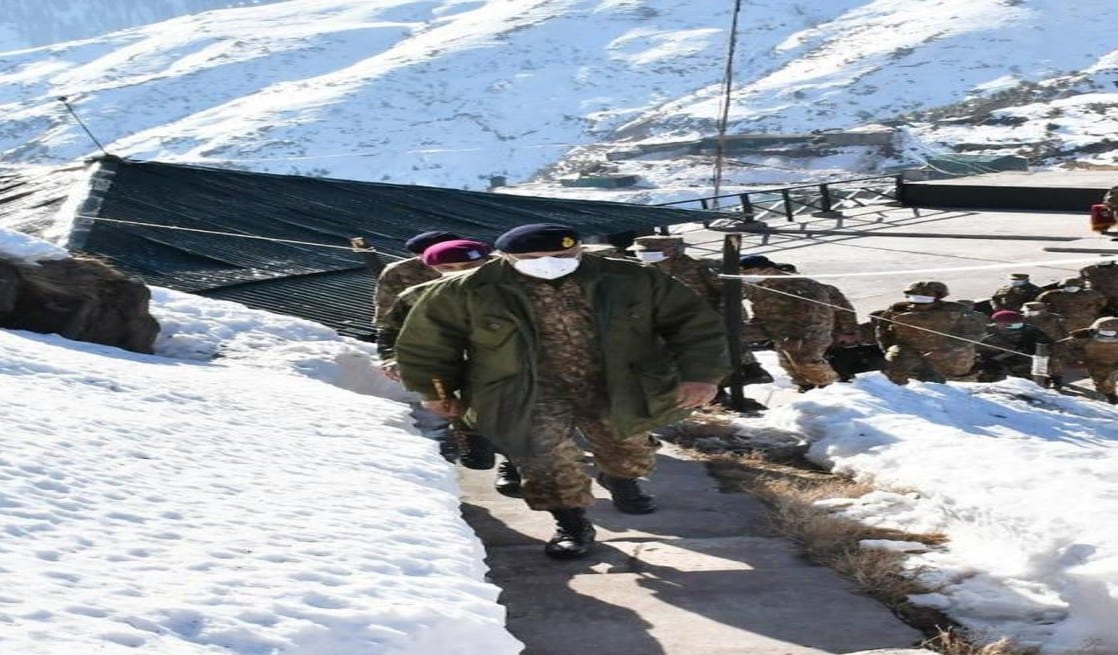 According to Inter Services Public Relations (ISPR), on December 21 202, Chief of Army Staff (COAS) General Qamar Javed Bajwa visited forward troops deployed along Line of Control (LOC). He was briefed about latest situation, Indian Cease Fire Violations deliberately targeting innocent civilians recent targeting of UN vehicle by Indian troops against all international norms and conventions. He had shown satisfaction of operational preparedness and appreciated high moral of deployed troops and their professional competency. COAS Condemned India aggression on LoC and reiterated that any Indian misadventure will be responded to protect innocent civilians along LOC and defend honour, dignity & territorial integrity of motherland at all costs.

On December 18, 2020 Indian troops deployed along Line of Control in Charikot sector specifically targeted a United Nations vehicle carrying two officers of the United Nations Military Observer Group in India and Pakistan (UNMOGIP). They came under fire when they were in their to Polas village to meet with the victims of Indian ceasefire violation. Pakistan Foreign Office Spokesperson Zahid Hafeez Chaudhri termed it a “new low” in their conduct. However, the officers were unhurt and shifted from the damaged vehicle to the Rawalkot filed station by Pakistan Army. ISRP also appreciated the selfless services rendered by all members of UNMOGIP officials

However, India shamelessly denied firing by her deployed troops, whereas UN vehicles are clearly recognisable even from long distances due to their distinct make and type and clearly visible marking. Pakistan condemned such illegal and unlawful acts against all established international norms, signify mal-intent of Indian Army to target not only innocent civilians residing along the Line of Control (LoC) but UN Peace Keepers as well. Spokesperson further expressed that Indian Army complete disregard the principles of UN Charter and indeed a new low for Indian Army.

In this regard, Pakistan has also officially dispatched written letters to UN Sectary General and President UNSC and demanded independent investigations of Indian firing. Islamabad also demanded that India be asked to immediately stop such type of unprovoked firings since it is clear violation of international law; the 2003 Ceasefire Understanding; and against all established humanitarian norms and professional military conduct.

Notably, India had committed over 3000 ceasefire violations so far this year alone, resulting in 27 deaths and serious injuries to 259 civilians, including 102 women and 74 children. Moreover, due to India firing on LoC number of civilian and military personals were also martyred and injured in this year.

Indeed, Indian act of firing on UNMOGIP seems to be a preemptive of false flag against Pakistan. Because BJP ruling elite wants to divert Indian masses’ attentions from domestic issues like, farmers protests, Sikhs voice for Khalistan, Hindus’ extremists’ violence against Christians, Muslims, Maoists voice for independence, uncontrolled Covid-19 and last but not the least ruthless brutality against innocent Kashmiris who are raising voice for plebiscite under UN resolutions. Therefore, India might plan surgical strike against Pakistan to divert the public from said internal affairs.

Prime Minister Imran Khan too has clearly given the message to his counterpart that any misadventure against Pakistan made by India would be responded with full force. In this connection, Pakistani had already set examples when two Indian air crafts MiG-21 fighter jets were shot down, one of the Pilot, Wing Commander Abinandan captured and released as peace gesture, vital forces headquarters located in Occupied forces were engaged but deliberately avoided their elimination by Pakistani Strike Forces in 2019.

It is mentionable here that two nuclear neighbours had fought four wars on outstanding issue of Kashmir. Pakistan time and again asked world community and United Nations Security Council (UNSC) to pressurize New Delhi for resolving it under UN Resolutions but India never paid any heed to Kashmiri’s demand and piling up, the armament stocks. According to the Stockholm International Peace Research Institute (Sipri) said in its annual report India had the world’s third biggest military budget last year, behind the United States and China. Her military spending of $71 billion was 6.8 per cent higher over its 2018 expenditure. It grew by 259 per cent over a 30-year period stretching from 1990 to 2019 and by 37 per cent over the 2010-19 decade.

This pilling up of armament definitely could be preparing herself for a war against China and Pakistan in 2021. Anyhow, India doesn’t realize that the attempt against two neighbours might cloak the region and ultimately resulted into global atomic war. Therefore, it is a need of the hour that UN and world power should come up and force India to settle the border and Kashmir Issues peacefully with China and Pakistan under UN shelter to save the world from another Catastrophic.

The writer can be approach through zameer36 @gmail.com