…from the Army Times

[ Editor’s Note: This is the weirdest title I have seen in a while, a classic example of government spin. This guy totally nuts out, where his kids end up begging not to kill mom and them, and it is an “alleged” standoff with police.

This is not an ordinary Colonel, but chief of staff for I Corps. There is no mention of drugs or alcohol tipping him off, nor Covid stress, as he has a guaranteed income with full benefits.

This was not your screaming madman, but someone calmly telling the police that he had killed a lot of people and would have no problem adding them to the list. Santa Claus he was not, despite having been opening presents under the tree four days ago.

Fortunately the family survived, but with the wife getting the all too not uncommon beating from a military husband, the kicking kind. Based on the military domestic incident stats, especially in the enlisted ranks, women marrying soldiers should be required to sign a full disclosure statement. It would include that they are fully aware of the domestic violence record, and waive their right to self defense hand to hand combat training.

As an officer he will get a higher level of treatment, which will probably include his leaving the military. With off base housing, the civilian courts will have jurisdiction and the solid military benefits will be a dependable safety net for his family, which surprised me to learn will include legal assistance.

Once again we see the hidden ongoing tragedy in the military. As Gordon recently pointed out, we continue to lose more troops from suicides that conflict deaths, or maybe we should call them ‘delayed combat deaths’.

The good news is the Army wives have a solid support system. We wish the family well in getting through this, but to what may never be a normal relationship with the Colonel again…Jim W. Dean ] 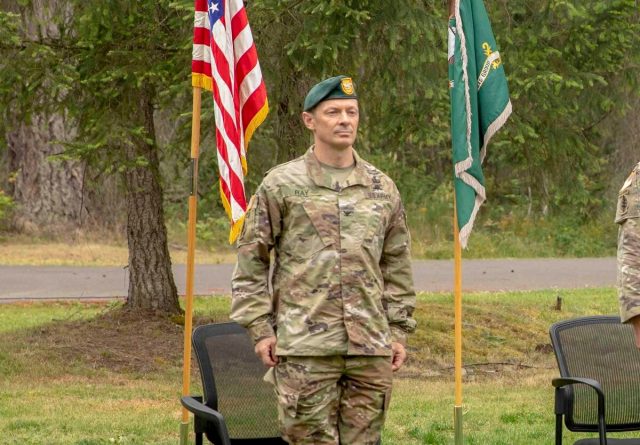 State and local police near Joint Base Lewis-McChord, in Washington, spent roughly two hours talking a Special Forces colonel armed with a rifle and pistol into surrendering after they responded to a domestic assault in progress call just after midnight Sunday.

Col. Owen G. Ray, 47, and his wife got into an argument earlier in the evening, according to a probable cause affidavit. Believing her husband was intoxicated, the wife retreated to her children’s bedroom to hide.

She then heard Ray say, “let’s do this,” before he went to the garage where the guns were stored, Pierce County prosecutors wrote in the affidavit. The house is in the town of DuPont, about 10 miles southwest of the base where Ray serves as the Army’s I Corps chief of staff and previously commanded a Special Forces group.

Ray, now armed, went back into the house and found his wife, who proceeded to call the police, “at which point, the defendant became enraged.”

“He pointed the gun at [the wife] and threatened to kill her,” the affidavit reads. “He proceeded to kick [her] over and over with his boots in the face and chest. The two children had woken up and were screaming, ‘don’t kill mom, don’t shoot us.’”

Ray left the room but returned after his wife had tried to barricade the entrance with a bookshelf, the affidavit stated. He smashed the barricade down and waved a gun while yelling threats.

Washington State Patrol and a mix of local police units arrived sometime after midnight. Ray eventually allowed his wife and two of the children to exit at around 12:33 a.m. His teenage daughter followed them out shortly afterward.

Police were able to contact Ray via phone at 12:49 a.m., and he threatened to take his own life as well as anyone who tried to arrest him.

“The defendant outlined his extensive training in combat,” the affidavit reads. “He told law enforcement he was a 25-year veteran and spent most of his time in the 1st group special forces. He stated that he had killed a lot of people and he had no problem killing law enforcement if they made attempts to arrest him. The defendant was calm, coherent, and articulate.”

After these initial threats, Ray would alternate between saying he had great respect for law enforcement and warning them not to arrest him, according to the affidavit. During the two-hour standoff, police said they saw Ray on the balcony holding a pistol to his head and holding a rifle inside the house.

“Active negotiations and de-escalation attempts took place until the suspect eventually surrendered and was safely taken into custody,” DuPont police said in a statement. “This occurred approximately two hours after initial communication was established between the police and the suspect.”

After surrendering, Ray was booked into the Pierce County Jail.

He was arraigned Monday afternoon and his charges changed slightly from earlier reporting. The Pierce County Prosecutor’s Office has charged him with two counts of felony harassment, one count of kidnapping, two counts of assault and one count of reckless endangerment.

Ray’s bail amount was set at $1 million. He is due back in court Jan. 11 and his jury trial is scheduled for Feb. 18, according to court records.

On Monday, I Corps spokesman Lt. Col. Neil Penttila said unit officials were monitoring the allegations against Ray and will “work closely with the family and the officer” to provide counseling and legal assistance.

“We have been in contact with local law enforcement, who have informed us that the investigation is still on-going,” Penttila said in a statement. “The safety of everyone involved is the command’s priority.”

Prior to serving as I Corps chief of staff, Ray led 1st Special Forces Group, also at Joint Base Lewis-McChord. An archived news release stated that Ray gave up command of 1st Group during a July ceremony.

Ray has held a command at every level within 1st Group, according to 2018 news release from the unit when he took charge.

He served as a 1st Group detachment commander in 2003 and as a company commander in Afghanistan in 2011. Two years later, in 2013, Ray commanded 1st Group’s 4th Battalion and deployed as part of the Special Operations Joint Task Force.

Reauthorization of the violence against women Act, and for other purposes

US House passed, US Senate has not passed it