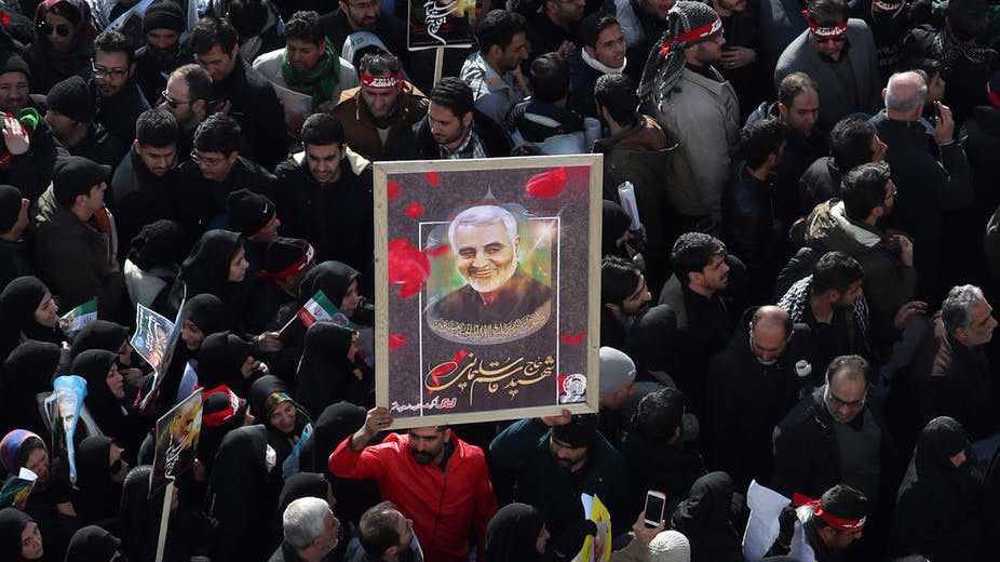 [ Editor’s Note: The anniversary was bound to stir up the retribution fires over the US drone strike on the Soleimani team that flew to Baghdad for a meeting to discuss deescalating tensions in the Persian Gulf.

At the time, world media showed no interest in that aspect of the assassination. VT got the news quickly from the reporter who posted his notes on Twitter of the parliamentary conference held soon after, where Soleimani’s Iraqi hosts confirmed it was a diplomatic meeting.

Was the prospect of peace in the region the possible trigger for his elimination? VT has a long history of studying the ‘threats’ that unwanted peacemakers expose themselves to when challenging the endless war and chaos machine. Messing with their money making machine can get you killed.

As Trump waits out what is expected to be his last days in office, we still have had no adjustments made to the US claim that it had no fatalities during the big Iraq air base ballistic missile retaliation by Iran, a tragedy to those US serviceman serving at the base with no air defense.

Iran chose a soft target to hit to illustrate that the US had miscalculated, and also to put the accuracy of its missiles on display. Its promise to bring those responsible for the Soleimani assassination to justice is a classic “eye for an eye” promise, and not viewed as an idle threat.

This will put the Biden administration in an awkward spot, if it happens early during his administration when he has indicated an positive attitude toward bringing the US back into the JCPOA.

But now we have to worry that Trump might want to order a retaliation attack on Iran for the US airbase attack, just to leave that mess on Biden’s plate. Would the US military carry out such a self-serving Trump attack for spite on Biden? Our sources indicate the generals would not allow themselves to be abused like that… Jim W. Dean ]

Tehran Prosecutor Ali Alqasi-Mehr says United Kingdom-based security company G4S collaborated with US forces in the assassination of Lieutenant General Qassem Soleimani by providing the US with information about the top Iranian anti-terror commander.

“One of the important and significant issues in this case is the role of the British company G4S in the assassination of the commander of the Quds Force of the Islamic Revolution Guards Corps (IRGC), which was responsible for flight securing at Baghdad airport, and the agents of that company provided information to the terrorists about General Soleimani and his companions upon their arrival,” the official said on Wednesday.

The judicial official made the remarks during a legal and judicial follow-up session on the assassination case of General Soleimani.

He added that the six countries of Iraq, Syria, Lebanon, Qatar, Jordan and Kuwait have been given warrants from Iran to identify and arrest the culprits.

A committee has also been set up to track down the whereabouts of American terrorist suspects outside the United States to arrest and extradite them, he added.

He said that the US air base in Germany was also involved in the exchange of information among the American drones that were involved in the assassination of General Soleimani, noting letters rogatory have been issued in pursuing the case.

US terrorists assassinated General Soleimani, along with Abu Mahdi al-Muhandis, deputy head of Iraq’s Popular Mobilization Units (PMU), and their companions by targeting their vehicle outside Baghdad International Airport on January 3.

The cowardly act of terror was carried out under the direction of US President Donald Trump, with the Pentagon taking responsibility for the strike.

General Soleimani is viewed by the world’s freedom-seeking people as the key figure in defeating Daesh, the world’s most notorious terrorist group, in the Middle East battles.

‘Gen. Soleimani’s blood united our region in opposing US arrogance’

The Iranian Foreign Ministry in a post on Twitter on Wednesday said that the blood of General Soleimani “united” the Middle East region in “opposing US arrogance,” adding, “The anger & unity still stand.”

“Last yr, across the region, from #Iran & Iraq to India & Pakistan, ppl showed disgust for murderers of Gen Soleimani. His blood united our region in opposing US arrogance & presence. A real response to recklessness. The anger & unity still stand,” said the tweet with the hashtag #WillNeverForgetWillNeverForgive.

Last yr, across the region, from #Iran & Iraq to India & Pakistan, ppl showed disgust for murderers of Gen Soleimani.
His blood united our region in opposing US arrogance & presence. A real response to recklessness.
The anger & unity still stand.#WillNeverForgetWillNeverForgive pic.twitter.com/Csv97uEMR9

During the legal and judicial follow-up session on the assassination case of General Soleimani, Iran’s Judiciary Chief Ebrahim Raeisi described General Soleimani as the symbol of anti-terrorism fight and a key figure in providing security for the region and said the indictment for his assassination is not only a legal lawsuit pursued by his family or the people of Iran, but also an indictment demanded by the Muslim world and the free people of the world against American state terrorism.

He added that there are sufficient documents to pursue the matter and request punishment for the perpetrators of this huge crime.

He noted that the judiciary would pursue the case as part of the tough retaliation against the US.