Sterling called a press conference Georgia on the eve of critical statewide elections there – telling the media there was ‘not a whit’ of truth to claims that ballot machines ‘flipped’ votes from Trump to President-elect Joe Biden.

Sterling issued a furious point-by-point take down of claims and conspiracy theories put forward by Trump and his allies – blasting ‘misinformation’ and ‘disinformation.’

His point-by-point rebuttal came on an extraordinary day whose developments included:

With rapid-fire speech, Sterling spelled out the redundant cross-checks and safeguards in the state’s election systems – and ridiculed several of Trump’s claims.

‘There is no shredding of ballots going on. That’s not real. It’s not happening,’ he said, after Trump raised the prospect on his hour-long call with Secretary of State Brad Raffensperger.

He mocked a claim put forward by Trump about the innards of voting machines – a charge Trump leveled with such generality it drew mockery online.

‘This is one I don’t fully understand. No one is changing parts or pieces out of Dominion voting machines. That’s not a real – I don’t even know what that means. It’s not a real thing,’ he said.

Trump had asked on the Saturday call: ‘But have they moved the inner parts of the machines and replaced them with other parts?’

Election lawyer Brian Germany responded simply on the call: ‘No.’

Sterling revealed his frustration at Trump repeating conspiracy theories about alleged fraud in the count at the State Farm Arena – claims his office has repeatedly debunked.

‘I will admit when I listened to the audio of the phone call and the president brought that up again and I heard him on radio ad again today I wanted so scream … I screamed in my car at the radio talking about this because this has been thoroughly debunked,’ he said. 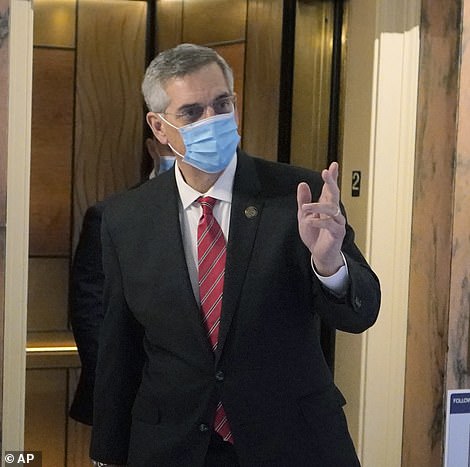 Sterling fielded a question about why his office taped the hour-long call – which has prompted officials in Georgia and Washington, D.C. to call for a criminal investigation of the president.