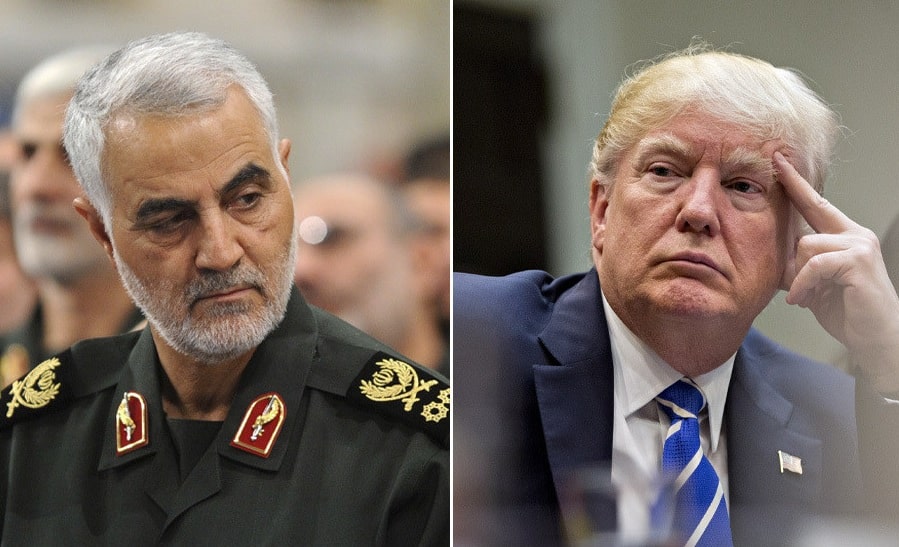 In the same way that I believe that Joseph Biden is responsible for “war crimes” for fomenting the Donbass war in Ukraine with the coup in Kiev plotted by CIA and US Embassy, I consider it more than legitimate to request an arrest warrant for Donald Trump in relation to the premeditated assassination of Qasem Soleimani, commander of the Pasdaran Quds Force Special Department on the January,3, 2020.

Two terrible consequences arose from that event: the increase in the uranium enrichment process in the underground nuclear power plant of Qom, near the mosque where the Guards of the Islamic Rivolution of Iran displayed the red flag of revenge; and the probable killing of Mike D’Andrea, the Central Intelligence Agency commander in Middle East operations who managed the execution of Soleimani but was killed in the plane crash in Afghanistan a few weeks later.

Therefore I agree with Iran’s request for an international arrest warrant for Trump but at the same time I would like Russia to ask for one for Biden for the 10,000 victims caused by the civil war in the Donbass, rich in the oil desired by Burisma, the Ukrainian energy company. of which he was well-paid consultant Hunt Biden at the same time that his father was deciding the funding for police reform in Ukraine.

Iran has requested that Interpol issue a ‘Red Notice’ for Donald Trump and 47 other officials, over their “role” in the assassination of Qassem Soleimani last January, said judiciary spokesman Gholam Hossein Esmaeili.

Iran has requested that Interpol issue a ‘Red Notice’ for Donald Trump and 47 other officials, over their “role” in the assassination of Qassem Soleimani last January, said judiciary spokesman Gholam Hossein Esmaeili.

“The request to issue a ‘Red Notice’ for 48 people involved in the assassination of Martyr Soleimani, including the US President, as well as commanders and officials at the Pentagon, and forces in the region, was handed over to Interpol,” said Esmaeili at a press conference in Tehran on Tuesday. “The Islamic Republic of Iran is very seriously following up on pursuing and punishing those who ordered and executed this crime,” he added.

According to the International Criminal Police Organization, its ‘Red Notice’ is a “request to law enforcement worldwide to locate and provisionally arrest a person pending extradition, surrender, or similar legal action.” Interpol notes that it is not an arrest warrant.

Iranian Minister of Intelligence Mahmoud Alavi also spoke on the issue on Tuesday, saying that Iran had prepared 1,000 pages of documents to refer to the International Criminal Court to prove that state terrorism had been used against General Soleimani. He also pledged “tough revenge at the proper time.”

Iran’s top general, Qassem Soleimani, was killed in a US drone strike on January 3, 2020, while visiting Baghdad. Agnes Callamard, the United Nations’ special rapporteur on extrajudicial, summary or arbitrary executions, described the assassination as “unlawful” and a “nail in the coffin of international law,” when she took to Twitter on the anniversary of the assassination.

Iran already requested Interpol’s help in arresting Donald Trump and 35 other officials on “murder and terrorism charges” in June last year. However, Interpol rejected the request, citing its constitution as prohibiting it from undertaking “any intervention or activities of a political, military, religious, or racial character.”

Donald Trump is set to leave office on January 20, and Iran has expressed the hope that the end of his presidency might mean he could be brought to justice.