Home Government Is this the US Capitol Trumpster 9-11 with total security failure?

One person shot inside Capitol

[ Editor’s Note: The Chaos gets ramped up into high gear. Early news showing no preparation to deflect such an attempt, starting with allowing large crowds to gather in front with no major security forces in sight to signal the Capitol was well protected.

Notice in top feature image, there were backpacks galore on the people, where one satchel charge with a five second fuse dropped at the door of both the House and the Senate would have made this a different day. Even an fake protestor could have done this. This was the insanity of have totally insufficient security in the first place, almost like the door was left open for the Trumpers.

There does not even seem to have been a joint command center operating so reinforcement deployment decisions could have been made in minutes, nor even a few hundred riot police within quick deployment range.

Normally the protestors would have been infiltrated to give warning to the Capitol security that the protestor plans were. It looks like a complete failure on that.

One could describe it as almost a stand down. I watched the moment when the crowd sensed the weakness of the then line of cops on the front steps. Someone said “go” and the cops immediately retreated, and it was game over from that point on.… Jim W. Dean] 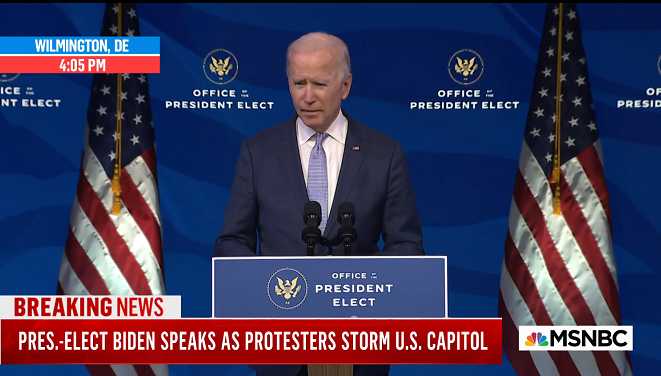 President-elect Joe Biden condemns the actions the mob that has overtaken the Capitol:

“This is not dissent, it’s disorder. It’s chaos. It borders on sedition. And it must end, Now.” Biden is calling on on President Donald Trump to address violent protests on national television and demand they end. He called on protesters to leave: “It’s not protest, it’s insurrection.”

The DC Mayor’s office and the Speaker’s office have both requested the presence of the National Guard to clear the U.S. Capitol.

“It is my considered judgment that my oath to support and defend the Constitution constrains me from claiming unilateral authority to determine which electoral votes should be counted and which should not,” Pence wrote.

“Friends of mine & people I’ve hired: I don’t have an explanation of their failure,” the former Sergeant at Arms says as law enforcement attempts to retake the Capitol grounds from protesters. “But there was a freaking failure.”

Sen. Duckworth (D- Ill.) on resuming the count of Electoral College votes: “We will continue to have the democratic process, and I won’t yield to these protesters.”

The Telegraph: House and Senate are in recess after Donald Trump supporters breached the Capitol building. It came after Vice President Mike Pence has said that he will not intervene to stop the certification by Congress of Democrat Joe Biden’s election victory, in defiance of Donald Trump.

The statement was released as Trump urged Pence to decline to certify the Electoral College results. In Congress, Republican lawmakers objected to certifying Arizona’s electors, forcing a debate on the baseless fraud claims.

…The DC Mayor’s office and the Speaker’s office have both requested the presence of the National Guard to clear the U.S. Capitol.