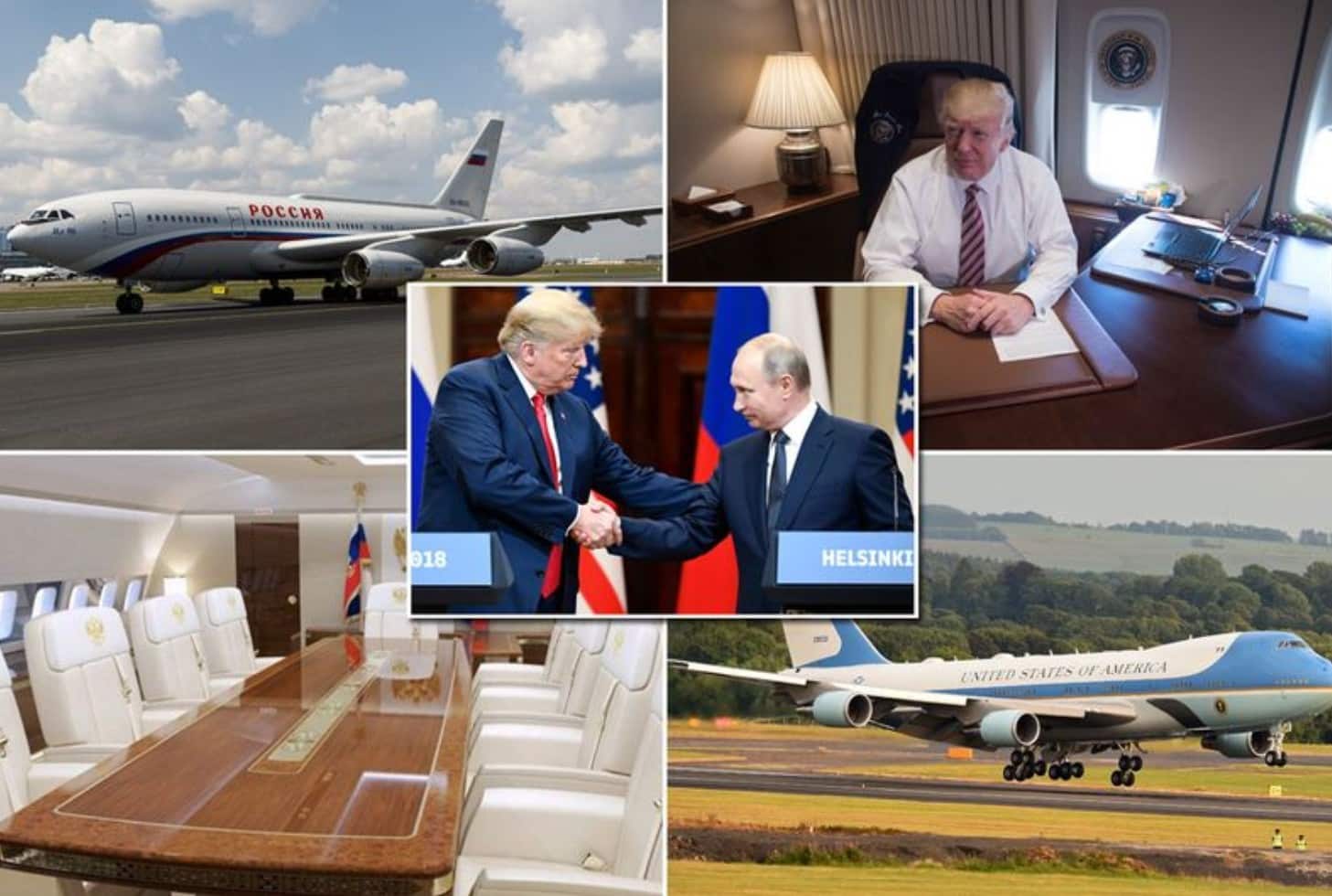 “If Trump flees abroad after losing a close, viciously contested election. Hunkered down in a foreign country willing to provide sanctuary, he could conceivably style himself a ‘president in exile’ and incite his die-hard American followers.” (Brig. General Anthony Zwack October 28, 2020)

VT’s Russian sources say Donald Trump has secured a massive $100,000,000 apartment in Moscow with gold toilets, gold leaf everywhere and separate bedrooms for Trump and whoever accompanies him, either Melania or Ivanka.

@realDonaldTrump has said he will not be at Biden’s inauguration.

Trump will already be in Russia hanging out with Snowden. I’m sure they will be looking for an apartment together while they try to avoid extradition.#TrumpIsNotWell #TrumpIsADomesticTerrorist #Trump

They also say they have expected Trump any day now, along with Air Force One, which Russian technicians are ready to disassemble for its secrets. The reality of this began to emerge with stories of Trump fleeing to “Scotland” and, finally, with his “crash and burn” coup attempt on January 6 followed by his announcement he won’t be in the country on January 20.

To all of those who have asked, I will not be going to the Inauguration on January 20th.

With an impeachment vote as early as next week, Trump has announced in advance that he will not be attending the inauguration of President Elect Biden even though, under pandemic restrictions, Biden may even have a smaller crowd than Trump, though probably not.

I chose UAE b/c they do not have extradition treaty with US. Conventional is Russia but Trump would no longer be a useful idiot for Putin and why would he want him around?

Trump faces arrests at exactly noon, January 20, 2021 for charges of inciting a riot in Washington DC and preliminary charges in New York for fraud and tax crimes.  New York has been preparing an early indictment of Trump to coincide with the end of his term, which may be days early as some GOP senators may join the impeachment which is currently racing through the House of Representatives.

Trump had previously planned to take Air Force One to Scotland and from there seek a non-extradition home in Russia or Israel but was blocked.  Scotland’s government told Trump, through the press, that he was “persona non grata.”

Trump has been planning to skip the country for Jan. 20 . Scotland told him not to go there . Where do you think he will go ? Maybe a quick ski trip to Russia ? Or a vacation in Saudi Arabia ? No extradition treaty in either ? https://t.co/vWeQ8HWkV5

Trump’s possible introduction to Russia would be turning over Air Force One and its secret communications and command security capability to Russian intelligence.  From Brig. General Peter Zwack:

Brigadier General Peter B. Zwack retired from the U.S. Army in 2015 after a 34-year career in tactical and strategic military intelligence, and as a foreign area officer. His overseas postings included Afghanistan, Kosovo, South Korea, West Germany and Russia. His final assignment was as the U.S. senior Defense Attache to The Russian Federation from 2012-2014.

Earlier this month, at a campaign rally in Macon, Georgia, President Donald Trump mused aloud to the crowd about what he might do if he loses the election on November 3.

‘Maybe I’ll have to leave the country, I don’t know,’ Trump said.

Was the statement merely a sour-grapes throwaway line by a cantankerous candidate facing potential defeat? Or was it a signal that Trump might actually abandon—some would say flee—our shores and seek refuge elsewhere if he is routed by a Joe Biden victory?

During my long military intelligence career I spent countless hours with my peers working on diverse ‘What if … ?’ contingency scenarios in complex locales such as the Balkans and Afghanistan. In these intensely personal environments, where clan or tribal loyalty is paramount, local and regional leaders, often with links to organized criminal activities and enabling transnational networks, could be dangerously unpredictable. Judging from the array of personality traits gleaned from these and numerous other experiences, and correlating them to his current circumstances, to me Trump appears to be a classic flight risk.

Setting aside for the moment his conduct as president, Trump faces a financial and legal reckoning of immense proportions as soon as he leaves office. If he loses, he will no longer have protection from an avalanche of charges and lawsuits against him, his family and the Trump Organization. His years of alleged tax evasion will be officially scrutinized—and far more publicly than before he held office. He will no longer be able to claim (falsely) that his taxes are still ‘under audit’ and unavailable. Trump properties and investments could be frozen, seized or plummet in value. The true nature of his extraordinary personal financial debt—recently reported as $421 million—will be exposed, and his likely foreign creditors revealed. Surely adding to his worries was the announcement on October 15 by the Internal Revenue Service that it is indicting Robert Brockman, a wealthy Houston software magnate, in its largest tax-fraud case ever. The action against Brockman shows that the IRS is not afraid to go after big fish who attempt to circumvent their tax obligations.

There is nothing in this president’s demeanor, past or present, to suggest that he has the fortitude or integrity to face auditors, prosecutors, or anyone else who challenges him, particularly if the outcome is likely to involve public humiliation and loss of assets, prestige and power. The option of salvaging what he can by relocating to a jurisdiction beyond the reach of U.S. laws would not be a stretch for someone who has long been openly disdainful of our tax and legal systems.

Trump’s (sic) most logical move would be to negotiate asylum somewhere from which extradition would be difficult. Doing so would allow him to temporarily escape U.S. jurisdiction and law, although he would also become in essence a hostage, a gilded trophy of sorts. After first fleeing to Costa Rica in 1973, Vesco made his home in Antigua, Nicaragua and Cuba, whose governments were not inclined to cooperate with U.S. authorities. And Edward Snowden, the disgruntled Booz Allen contractor turned whistleblower, has been living in Russia, under the protection (and eye) of the Putin regime, after fleeing the U.S. in 2013 with a treasure trove of classified information.

It is conceivable Trump could plan a stealth departure sometime before Inauguration Day, while he still has the protection of legal immunity as a sitting president. Leaving U.S. airspace before he resumes the status of private citizen at noon on January 20 would allow him to escape—or at least delay—dealing face-to-face with many creditors and lawsuits. Classic indicators of preparation for such a move would include fast sales of domestic properties and investments, and a quiet amassing of wealth offshore, out of reach of U.S. authorities. Trump’s family members and trusted corporate staff would likely be heavily involved in orchestrating the relocation.

What methods might a sitting U.S. president use to leave the country on a one-way journey? The choice could be as brazen as not reboarding Air Force One while out of the country.

While on U.S. shores, Trump could find a creative way to slip his Secret Service detail and fly away in a friend’s private jet or foreign aircraft. Sailing away into international waters would also be a plausible option.

If all this sounds like a B-grade spy novel, it should. The flight of a U.S. president would be unprecedented, unsettling and profoundly disappointing. As a minimum, a presidential defection would temporarily absorb the resources and attention of a wide range of U.S. defense, intelligence and law enforcement agencies. In more than two centuries of peaceful transfers of presidential power, nothing remotely conceivable like it has ever happened.”