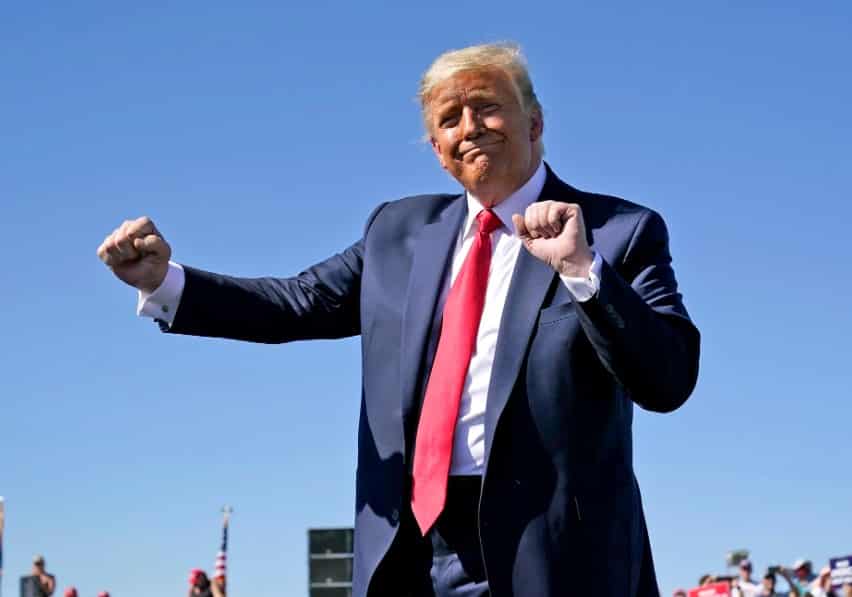 [ Editor’s Note: You all know what I am going to say here. You just can’t make this shit up! Not even I would have dreamed that his family would be stupid enough to make a video of them in party while watching the mob they had just revved up to attack the Capitol.

Only life long sociopaths would not have the slightest concern over recording themselves like this, and worse, including footage of Donald doing his little dance, totally unconcerned with what he had unleashed on the country, and will boomerang on he and his family.

All I can think of is that the son (I don’t know which one), wanted the rioters to be able to see them cheering them on. No one was thinking about how this would look on the screen in the grand jury room while they were mulling over charges.

I must admit I was quite hazy on the lyrics of Laura Branigan. They will be prophetic now as we may soon see the Trump family scooting out of the country, seeking refuge.

Gloria, you’re always on the run now
Running after somebody, you gotta get him somehow
I think you’ve got to slow down before you start to blow it
I think you’re headed for a breakdown. So, be careful not to show it

You really don’t remember, was it something that he said?
Are the voices in your head calling, Gloria?

Gloria, don’t you think you’re falling?
If everybody wants you, why isn’t anybody calling?
You don’t have to answer
Leave them hangin’ on the line
Oh-oh-oh, calling Gloria

Gloria (Gloria), I think they got your number (Gloria)
I think they got the alias (Gloria) that you’ve been living under (Gloria)
But you really don’t remember, was it something that they said?
Are the voices in your head calling, Gloria?

A-ha-ha, a-ha-ha, Gloria, how’s it gonna go down?
Will you meet him on the main line, or will you catch him on the rebound?
Will you marry for the money, take a lover in the afternoon?
Feel your innocence slipping away, don’t believe it’s comin’ back soon…

Unfortunately I fear that this will get worse before it gets better. We now look back on the bloodiest presidential elections in history, and one which might end up in the number one slot.

With all the above said, we have already heard rumblings of the Trumpsters coming back for the inauguration. The actions that the authorities take on what happened this week may or may not have any impact on their plans.

But for clues we will be watching the Trump announcements very carefully. We long for this to be over, and Trump does not, as it will be over for him, so he is all in, at this stage.

Let me know what you think in the comments… Jim W. Dean ]

Daily Beast: President Trump was “pleased” as hordes of his supporters first stormed the Capitol Building on Wednesday, and he ignored pleas from his aides to step in and defuse the situation, The New York Times reports.

Watch the video below, all in that video now facing arrest for murder, and no pardon can fix that…

JUST NOW: Before getting excited about a video where @realDonaldTrump made sounds with his mouth condemning violence…please watch the video of the Trump family literally dancing in anticipation of the insurrection.@NewDay pic.twitter.com/5Lfb6NGi1F

Several advisers are said to have frantically tried to convince him to take action, to no avail. As the full fallout of the coup attempt became clear late Thursday—with four people confirmed dead and a Capitol Police officer on life support—Trump released a video in which he finally condemned the violence and acknowledged that his presidency was ending (albeit while clearly reading from a script).

But even that two-and-a-half-minute video came not after Trump realized the scope of the damage of the riots but after he realized he could personally face legal trouble, according to the Times. He is said to have initially been against making the video and agreed to it only after it became clear that prosecutors intended to scrutinize his comments to supporters before the coup.