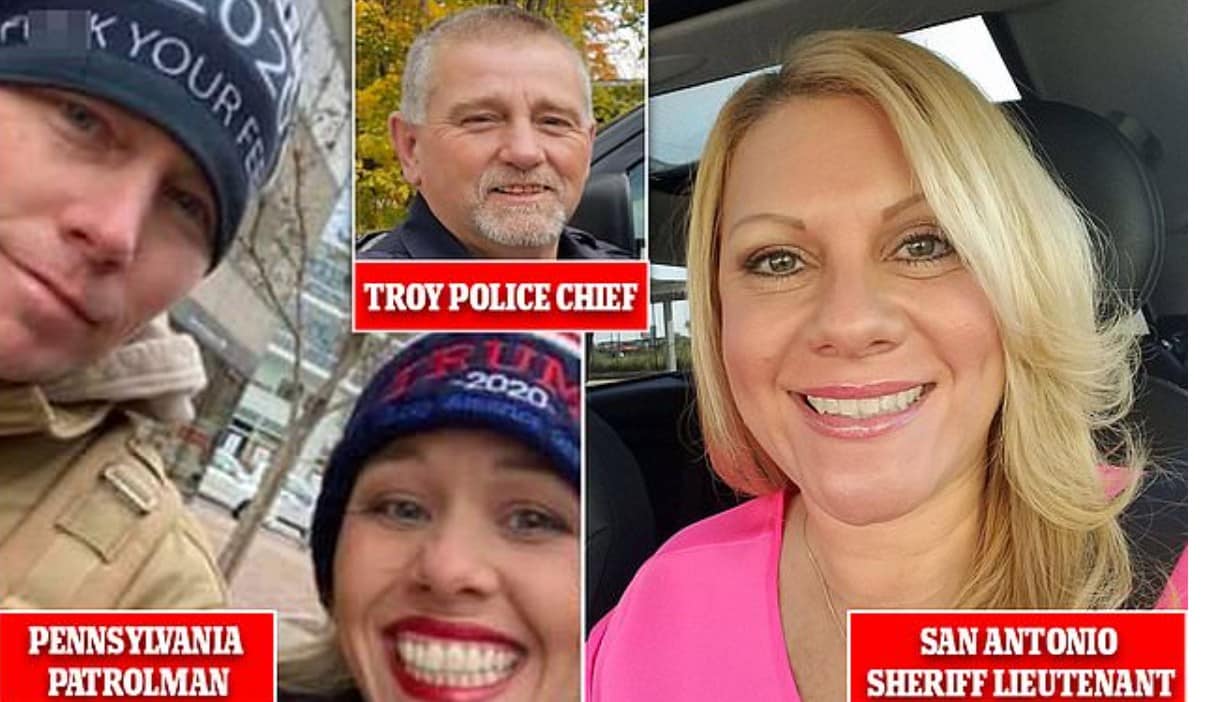 UK Daily Mail: Crossing the thin blue line: Precincts across America investigate officers and at least one chief for involvement in MAGA mob’s Capitol assault – as FBI probes possible ‘inside job’ aided by cops and staffers

Police departments in California, New Hampshire, Washington State, and Texas are among those who have already began investigating their own officers based on tips, social media posts and other evidence, with more expected to follow.

Among the under fire officers is Thomas Goldie, a patrolman for Pennsylvania’s Zelienople Borough Police Department whose wife uploaded a picture of him attending the protest to Facebook.

Similarly, in San Antonio, Sheriff Javier Salazar of Bexar County said he had referred Lt. Roxanne Mathai to the internal investigations department after she posted a video of herself on Facebook near the Capitol, wearing a red, white and blue face mask and wrapped in an American flag.

Salazar said some of her Facebook photos also show the lieutenant in the middle of a crowd that may have assaulted law enforcement agents. If that is the case, the sheriff said Mathai will be investigated on administrative charges of conduct unbecoming and wants her to ‘never set foot in (BCSO) again.’

Mathai, a 46-year-old jail lieutenant, has already been suspended from the force since October, according to Salazar, for a separate unspecified incident. The sheriff said Friday he has referred Mathai’s video to the FBI and the internal investigations department.

In Troy, New Hampshire, Police Chief David Ellis has also been heckled with calls to resign after he attended the violent rally in DC

In Seattle, Police Chief Adrian Diaz confirmed Wednesday that two officers have been placed on leave as their alleged roles in the riots are being assessed.

Where federal authorities are concerned, a TMZ report Saturday indicated that the FBI had launched an investigation into whether police and security staff at the US Capitol may have assisted protesters in gaining access to the building.

The FBI reportedly believe the mob may have been provided with a road map or guidance from someone – or a group – inside the building, helping them to find it so quickly.

Suspects reportedly include Capitol Police officers and many other staffers, including engineers, plumbers, and janitors.

Images that surfaced in the hours after the riot appearing to show police opening gates and removing barricades to allow the MAGA mob through are also raising eyebrows.

The FBI particularly wants to know if any off-duty Capitol Police officers were in the building, and if so, why, according to TMZ.