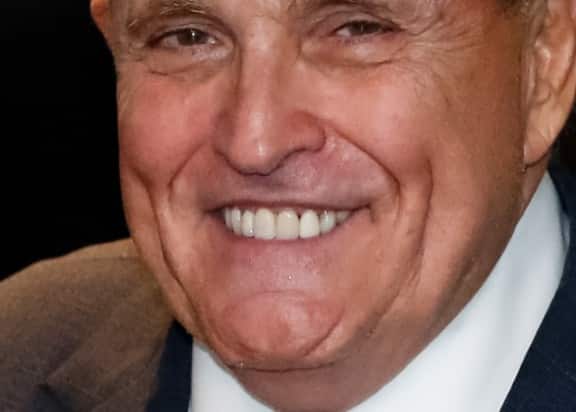 The New York State Bar Association has launched an inquiry into President Trump’s personal attorney, Rudy Giuliani, over his actions since Election Day. The bar association announced Monday it’s investigating whether Giuliani, a former New York City mayor and U.S. Attorney, should lose his membership in the organization, citing his remarks encouraging “trial by combat” before last week’s deadly riot at the U.S. Capitol and his efforts to cast doubt on the presidential election results.

NY STATE BAR ASSO., on Giuliani: "This decision is historic for NYSBA, and we have not made it lightly. We cannot stand idly by and allow those intent on rending the fabric of our democracy to go unchecked."

In a letter dated Friday to the grievance committee that investigates complaints against lawyers with offices in Manhattan, where Giuliani’s is located, two Democratic congressmen, Mondaire Jones of New York and Ted Lieu of California, called for Giuliani to be investigated.

“We believe the actions of Mr. Giuliani disqualify him from being a member in good standing with the New York State Bar,” the congressmen wrote.

Before the riot, Giuliani addressed a large crowd of Trump supporters near the White House about Congress’ count of the electoral votes submitted by the states. “If we’re wrong, we will be made fools of, but if we’re right a lot of them will go to jail,” Giuliani told the crowd. “Let’s have trial by combat.”

The bar association said Giuliani’s remarks were “intended to encourage Trump supporters unhappy with the election’s outcome to take matters into their own hands. Their subsequent attack on the Capitol was nothing short of an attempted coup, intended to prevent the peaceful transition of power.” The group noted that it’s against its bylaws for members to advocate overthrowing the government.

WASHINGTON – Today, the U.S. Department of the Treasury’s Office of Foreign Assets Control (OFAC) took additional action against seven individuals and four entities that are part of a Russia-linked foreign influence network associated with Andrii Derkach. Russian agent Derkach was designated on September 10, 2020, pursuant to Executive Order (E.O.) 13848, for his attempt to influence the 2020 U.S. presidential election.

“Russian disinformation campaigns targeting American citizens are a threat to our democracy,” said Secretary Steven T. Mnuchin. “The United States will continue to aggressively defend the integrity of our election systems and processes.”

Former Ukrainian Government officials Konstantin Kulyk, Oleksandr Onyshchenko, Andriy Telizhenko, and current Ukraine Member of Parliament Oleksandr Dubinsky have publicly appeared or affiliated themselves with Derkach through the coordinated dissemination and promotion of fraudulent and unsubstantiated allegations involving a U.S. political candidate. They have made repeated public statements to advance disinformation narratives that U.S. government officials have engaged in corrupt dealings in Ukraine. These efforts are consistent with and in support of Derkach’s efforts, acting as an agent of the Russian intelligence services, to influence the 2020 U.S. Presidential election.

Kulyk, a former prosecutor for the Prosecutor General’s Office of Ukraine, formed an alliance with Derkach to spread false accusations of international corruption. Onyshchenko, a fugitive from Ukrainian justice due to charges of corruption, provided edited audio tape copies of purported audio recordings of conversations between former Ukrainian and U.S. officials, which Derkach released between May and July 2020 to discredit U.S. officials and influence the U.S. elections. Telizhenko, a former low-level Ukrainian diplomat, orchestrated meetings between Derkach and U.S. persons to help propagate false claims concerning corruption in Ukraine. Dubinsky, who serves alongside Derkach in Ukraine’s parliament, joined Derkach in press conferences designed to perpetuate these and other false narratives and denigrate U.S. presidential candidates and their families.

Kulyk, Onyshchenko, Telizhenko, and Dubinsky are being designated pursuant to E.O. 13848 for having directly or indirectly engaged in, sponsored, concealed, or otherwise been complicit in foreign influence in a United States election.

TREASURY TARGETS DISINFORMATION APPARATUS SUPPORTING DERKACH
NabuLeaks and Era-Media TOV are media front companies in Ukraine that push false narratives at Derkach’s behest. Derkach has been the de facto owner of Era-Media-related companies since the 1990s. More recently, Derkach created the NabuLeaks platform to disparage the National Anti-Corruption Bureau of Ukraine (NABU). NABU was created in 2015 as one of three specialized anti-corruption bodies in Ukraine. Derkach and Dubinsky have lobbied against NABU in an effort to replace NABU leadership, discredit NABU as an organization, and deny their own corrupt practices.

NabuLeaks and Era-Media TOV are being designated pursuant to E.O. 13848 for being owned or controlled by Derkach.

Derkach has also used a network of media professionals and assistants to operate these entities, supporting his influence campaign centered on cultivating false or unsubstantiated narratives and spurring corruption investigations in both Ukraine and the United States.

Dmytro Kovalchuk is a long-time supporter of Derkach. Most recently, he served in the ranks of Derkach’s media team, where he provided profiles on U.S. political figures.

Anton Simonenko served as Derkach’s assistant for nearly a decade and helped Derkach hide financial assets. Simonenko continues to be one of Derkach’s closest associates.

The Treasury Department encourages the American people to confirm information received via social media intelligently by going to multiple trusted sources for news and information, particularly when the source or suspected source of the information is from outside the United States. More information specific to the U.S. 2020 election and disinformation campaigns can be found here: https://www.cisa.gov/rumorcontrol.

As a result of today’s designations, all property and interests in property of these targets that are subject to U.S. jurisdiction are blocked, and U.S. persons are generally prohibited from engaging in transactions with them. Additionally, any entities 50 percent or more owned by one or more designated persons are also blocked.

View identifying information on the individuals and entities sanctioned today.