Home WarZone Mike Pompeo: A Satanist and a Lying Liar 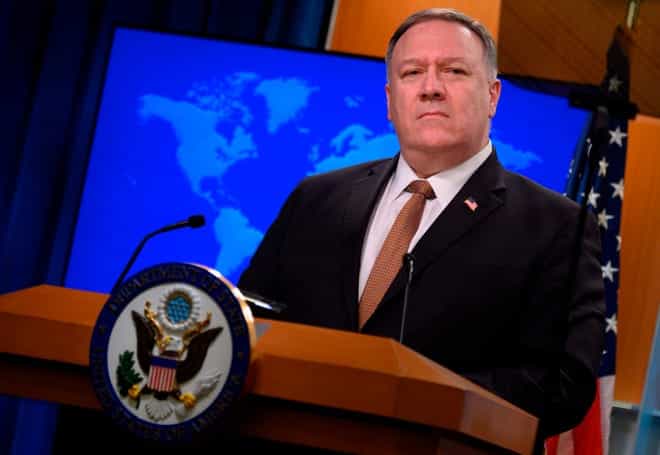 If you haven’t noticed, Mike Pompeo has just lied again. Pompeo has staged a horror show of epic proportions by axiomatically stating, without evidence, that al-Qaeda has “a home base” in Iran.

“Iran is indeed the new Afghanistan, as the key geographic hub for al-Qaeda,” Pompeo has recently spewed out. “They’re partners in terrorism, partners in hate. This axis poses a grave threat to the security of nations and to the American homeland itself.”[1]

Pompeo, as an Israeli shill, has to perpetuate things like that because he obviously thinks that this is going to frighten the vast majority of Americans. He obviously believes that the United States can repeat what they did in Iraq by telling Americans one lie after another. USA Today has reported:

“His provocative remarks come just days before President-elect Joe Biden takes office with promises to revive U.S.-Iran diplomacy, including the 2015 multilateral nuclear deal, aimed at curbing Tehran’s nuclear program, which the Trump administration withdrew from in 2018.

“Pompeo, an Iran hawk, has made it clear he opposes Biden’s plans to return to nuclear negotiations with Iran. Although he did not mention Biden by name on Tuesday, he denounced the ‘appeasement’ of Tehran as naive.”[2]

Pompeo again stated: “Let’s not lie to the American people about Iranian moderation and pretend the appeasement will work.”[3] A lying liar is telling us that framing a peaceful resolution with Iran and trying to avoid wars at all cost isn’t good. Trita Parsi—author of the trilogy A Single Roll of the Dice: Obama’s Diplomacy with Iran, Treacherous Alliance: The Secret Dealings of Israel, Iran, and the United States, and Losing an Enemy: Obama, Iran, and the Triumph of Diplomacy—obviously gets it:

Yet Ebony Bowden of the New York Post, in her desperate zeal to support a diabolical regime which never stops to look for fresh blood in the Middle East, has put out a misleading article earlier entitled, “Pompeo reveals Iran-al Qaeda secret terror alliance.” How can something be revealed without a shred of evidence? Does Bowden really think that she can fool everyone all the time? Listen to Bowden here:

“Revealing newly unclassified intelligence, Pompeo said the Iranian regime was providing logistical support to the extremist group and had become their new base — allowing al Qaeda to focus on new terror attacks and posing ‘a grave threat’ to US security.”[5]

And what is this “unclassified intelligence”? Well, it’s Pompeo himself. The Post continued to quote Pompeo saying,

“We ignore this Iran-al Qaeda nexus at our own peril. We need to acknowledge it. We must confront it. We must defeat it. Iran decided to allow al Qaeda to establish a new operational headquarters on the condition that al Qaeda operatives abide by regime’s rules governing al Qaeda.

“We now have the world’s largest state sponsor of terrorism, the Islamic Republic of Iran, as the home base for al Qaeda. They are partners in terrorism, partners in hate. This axis poses a grave threat to the security of nations and the American homeland itself. Al Qaeda today is operating underneath the hard shell of the Iranian regime protection. America has far less visibility on al Qaeda’s capabilities and their activities than we did.”[6]

Pompeo means to tell us that Iran spent years fighting al-Qaeda in Syria, and now Iran is working with al-Qaeda! How stupid can it get? Moreover, why doesn’t Pompeo start talking the MEK, the terrorist organ which both the United States and Israel have used in the past to create terror in Iran?

You see, the Neocons and warmongers in the United States do not believe that MEK is a problem at all because the terrorist organization has been supporting both Israel and the United States since the beginning of time. The flaming Neocon Daniel Pipes himself said: “The MEK poses no danger to Americans or Europeans, and has not for decades. It does pose a danger to the malign, bellicose theocratic regime in Tehran.”[7]

Pipes continued to say elsewhere that the United States must continue to establish a vibrant relationship with the MEK and “Remove the unwarranted terrorist tag from the MeK, as the European Union has already done.”[8]  The United States, Pipes moved on to say, must “seek out culturally similar hosts for MeK members; perhaps Persian-speaking countries (such as Tajikistan or Afghanistan) or Muslim Middle Eastern countries hostile to the Islamic Republic of Iran (such as Saudi Arabia or the Persian Gulf statelets).”[9]

In other words, if a terrorist organization is attacking Iran and perceived enemies of Israel, then that organization can never be a terrorist cell in the strict sense of the word. That organization has to be good. This ought to be called Satanism in the political sphere, and both Mike Pompeo and Daniel Pipes are Satanists because they will deliberately use lies and fabrications in order to keep a Luciferian ideology alive and well.

As my dear friend Mark Dankof stated in 2019:

It is clear that “regime change” in Iran is the goal of the Neo-Conservative, Zionist foreign policy of the Trump Administration. The situation in Iran must be understood not only in light of what the CIA and British intelligence did in Tehran with Operation Ajax in 1953, but in contemporary terms in the 4 decades since the overthrow of Shah Mohammed Reza Pahlavi in 1979 with ongoing American and Israeli subversion in various cities and provinces of Iran, along with the current American Empire machinations in Ukraine, Libya, Syria, Iraq, Bolivia, Venezuela, and now Hong Kong among others.

Pompeo’s recent announcement giving Israel the green light to steal the West Bank along with solidifying their theft of East Jerusalem (al-Quds) must also be added to this demonic mix and overview. Jewish settlement in Hebron (al-Khalil) alone has now tripled, as but one example of the ramifications. The American backed horrors in Gaza and Yemen amplify a very blood-soaked picture.