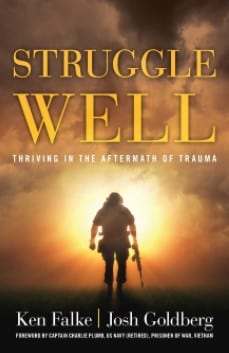 This book provides actionable strategies for making peace with your past, living in the present, and planning for a great future.

Your struggle may come in different forms, and be given one of many different names, such as anxiety, depression, addiction, and/or PTSD. No matter how much you or a loved one is struggling, or what it is called, one thing is almost certainly clear: you aren’t living the life you desire or deserve. Still, there is hope. By embracing the struggle, rather than fighting it, you can stop surviving and start thriving. Through Ken and Josh’s work, thousands have transformed struggle into profound strength and lifelong growth. Now it is your turn. It’s time to learn to Struggle Well.

About the authors: Ken Falke and Josh Goldberg train combat veterans battling PTSD to understand and achieve Posttraumatic Growth (PTG). PTG enables you to use times of struggle to create a life that is more meaningful, fulfilling, and purposeful than ever before.

Ken Falke spent 21 years in the US Navy as a bomb disposal specialist. After retiring from the Navy in 2002, Ken started and later sold A-T Solutions, a counter-terrorism company. In 2007, Ken founded the EOD Warrior Foundation to support the families of severely wounded military bomb disposal personnel. This work inspired Ken and his family to donate 37 acres of their estate in Bluemont, Virginia and millions of dollars to build Boulder Crest Retreat Virginia in 2013 – the nation’s first privately funded wellness center dedicated exclusively to combat veterans and their families– and go on to establish Boulder Crest Retreat Arizona and the Boulder Crest Institute in 2017.

Josh Goldberg is the Executive Director of the Boulder Crest Institute, which is dedicated to the advancement and application of the science of Posttraumatic Growth. After spending 11 years as a communications executive for two of the world’s biggest corporations, Josh’s world came crashing down, as he grappled with severe anxiety, depression, and thoughts of suicide. Although Josh initially sought to get well by helping others, the veterans he was “helping” ended up saving his life. Their strength, integrity, and brotherhood helped Josh develop a deep and abiding sense of strength, and a new tribe. In 2013, Josh met Ken Falke, and soon after joined the staff of Boulder Crest. He ultimately led the development of Warrior PATHH, the nation’s first-ever program designed to cultivate and facilitate Posttraumatic Growth amongst combat veterans. In 2017, Josh and Ken co-founded the Boulder Crest Institute, which seeks to help all those who struggle walk the road from struggle to profound strength and lifelong growth.