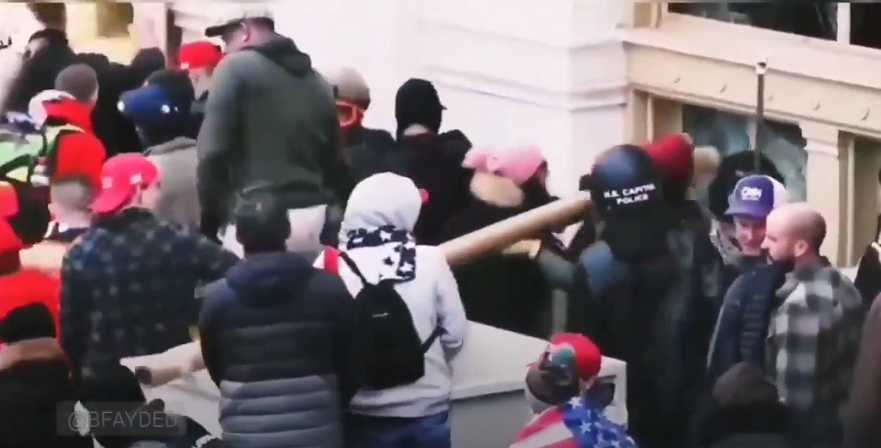 The helmeted Capital policeman was at the wrong place at the wrong time, wins idiot of the day honorable mention. How many more will there be?

“We know that the president of the United States incited this insurrection, this armed rebellion, against our country,” House Speaker Nancy Pelosi (D., Calif.) said. “He must go—he is a clear and present danger to the nation that we all love.”

This vote came as no surprise. Trump literally jumped off a cliff to make this happen. He can cry all he wants to about what a political lynching it is but his problems have just begun. The Democrats have the House majority so the vote for impeachment was assured, but both sides took their opportunity to speak out on the historic event.

Senate Speaker McConnell had already stated that he was open to convicting Trump in the Senate to remove him from doing further damage to the Republican part. Liz Cheney joined the impeachment train.

House Minority leader Kevin McCarthy stated that while he was opposed to impeachment, that did not mean Trump was free from blame but tried to walk a weasely middle of the road line this statement:

“That doesn’t mean the president is free from fault. The president bears responsibility for Wednesday’s attack on Congress by mob rioters. He should have immediately denounced the mob when he saw what was unfolding. These facts required immediate action by President Trump to accept his share of responsibility, quell the brewing unrest and ensure President-elect Biden is able to successfully begin his term.”

McCarthy would prefer censure to impeachment. The latter would prevent Trump from ever running for Federal public office which McConnell opposes, not wanting to deal with the Trump wrecking ball in the future.

Rep. Dan Newhouse, R-Wash, was the 6th Repub to vote for impeachment saying, “A vote against this impeachment is a vote to validate the unacceptable violence in our nation’s capital.” “It is also a vote to condone President Trump’s inaction.”

The Senate trial would of course not begin until Charles Schumer has taken over as Senate majority leader. But Lisa Murkowski from Alaska my cross over to the Democrats to add a key Democratic vote for when another Senator is absent.

We expect the Republicans to continue screaming in the impeachment trial that it is all a political lynching, but that will be more theater than real. Trump’s evidence of incitement already seems to be a done deal, with Rudy possibly lined up for some major problems himself.

It is not the Biden administration that has formed not only a special task for of national security prosecutors, but a separate one for public corruption prosecutors, showing that it also have evidence of widespread involvement of public official in the attempted Trump coup.

VT’s earlier article this morning superimposed the audio of Trump’s rabble rousing incitement speech superimposed over video of the Trump mob attacking the Capitol. I suspect the future grand jury might watch the same presentation.

As I watched it I spotted for the first time an fully riot equipment Capitol police officer in the front of the building on the ground floor closely watching rioters with a battering ram, struggling to break a difficult armored window.

The cop had been in profile so I first I assumed he might be a motorcycle guy, but when he turned his back to the camera the Capitol police was there to see. You can rest assured he has already be charged based on the video evidence.

We can expect the prosecutors to have charged many more rioters by Senate trial time, and also some ‘incitement’ cases. And as the lead DC prosecuted stated yesterday he will be working with his own teams, coordinating with states where the perpetrators reside to bring the more serious felony charges.

The big hammer to fall is going to be the felony murder one. Why? It is because for those that incited a mob that murdered victims, they share the same penalty, which is the death sentence.

That has not sunk in yet to those under arrest, or those who are going to be pulled into the crime dragnet that aided and abetted. This is going to be a trial that will rivet world attention and be an example to anyone in the future thinking of following in Trump’s shoes.

And then behind this, we have all of the other potential prosecutions for Trump’s other crimes, which could include his children. It is not going to be a fun time for the Trumps, but at least they will have their memories.