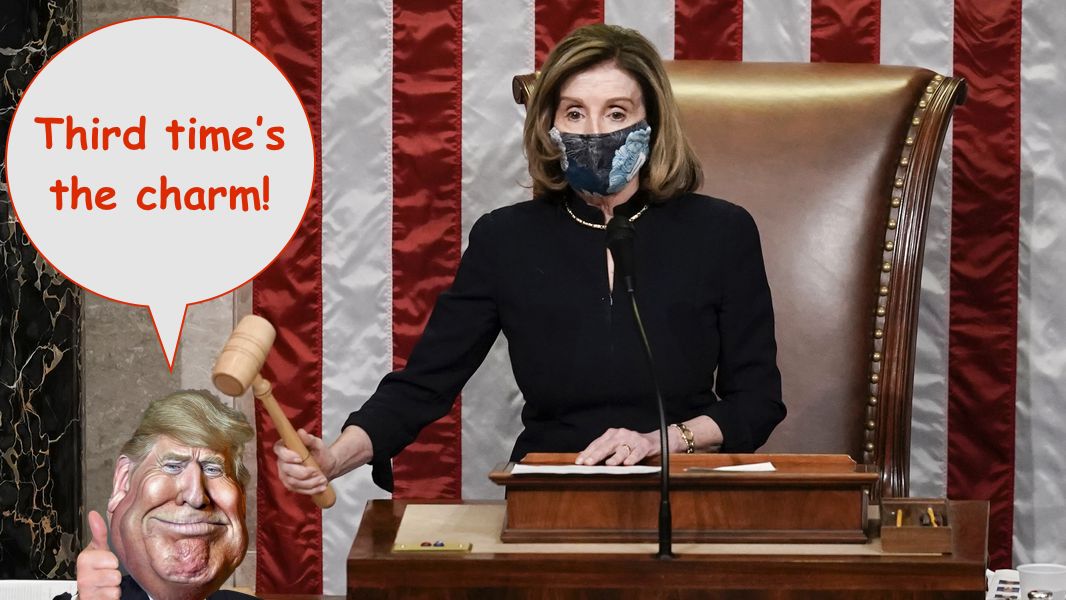 In a new video posted in an obscure corner of the darkweb, President Donald Trump congratulates himself on his world-record second impeachment, then vows to achieve an even more impressive third impeachment during his remaining five days in office.

“Only two other presidents in history have been impeached even once,” Trump gloats. “I did it twice. Now get ready for number three!”

In the video—entitled “Look What I Did for my Third Impeachment” (watched four times so far)— Trump boards a helicopter on the White House roof. Transported to Fifth Avenue in New York, the President emerges to randomly shoot a passerby. When an NYPD officer and Trump’s Secret Service detail studiously ignore the crime, Trump ups the ante by attacking a woman walking a dog and sexually assaulting the dog.

When the President’s crimes continue to draw no interest from law enforcement, Trump snatches a gun from a Secret Service officer’s holster and fires multiple shots into an automatic teller machine. He then turns the gun on the officer and orders him to disrobe.

Apparently losing patience, the officer’s partner tackles Trump from behind, and the President is bound, gagged, dragged aboard the Air Force One helicopter and delivered to the rooftop of Nancy Pelosi’s apartment building in Washington, where Pelosi’s goons extract him from the chopper, drag him down several flights of stairs by his feet, and deposit him in Pelosi’s dungeon for some gourmet ice cream and a serious dressing-down prior to tomorrow morning’s formal initiation of Trump’s record-setting third impeachment proceedings.