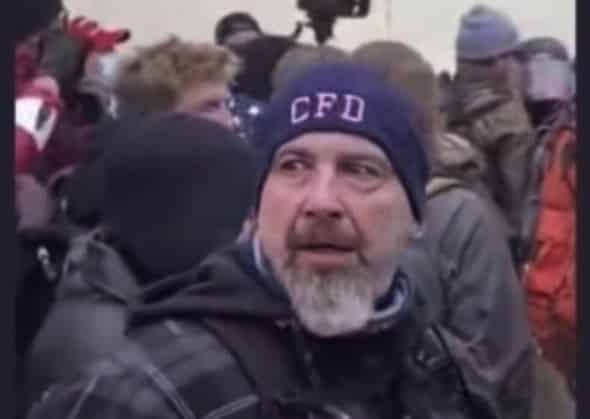 Daily Beast: A retired Pennsylvania firefighter was arrested Thursday for allegedly throwing a fire extinguisher at several law enforcement officers during the MAGA riots at the Capitol last week.

BREAKING—They’ve arrested the man who threw the fire extinguisher at the police on Capitol siege day. Who is he? Retired firefighter Robert Sanford of Chester, PA—he faces three federal felony charges including assaulting a police officer. Oy. pic.twitter.com/2QQv6Hod9g

Robert Sanford, a 55-year-old from Chester, Pennsylvania, faces three felony charges, including assaulting a police officer, after he was allegedly caught on camera hurling the extinguisher as the mob stormed past Capitol Police officers and broke into the building on Jan. 6. He was taken into custody by the FBI in Pennsylvania Thursday morning just before 6 a.m., a source with knowledge of the matter told The Daily Beast.

NEW: A retired Pennsylvania firefighter was arrested Thursday for allegedly throwing a fire extinguisher at several law enforcement officers during the MAGA riots at the Capitol last week https://t.co/yvYKAcB7dM

One video of the protest shows rioters storming past a barricade as Capitol Police officers desperately trying to contain them on the west side of the building. Then, a rioter can be seen tossing the fire extinguisher toward a group of officers—and striking at least one on the helmet.

“Robert Sanford of Chester, Pa., faces three federal felony charges including assaulting a police officer after he was allegedly identified as the person who lobbed a fire extinguisher on the west side of the Capitol, at around 2:30 pm…”https://t.co/30WFdH2MVy pic.twitter.com/qA3UwSBc98

“They broke through, it’s on!” an individual is heard yelling in the clip. The Wall Street Journal first reported the arrest and that the incident was captured on video.

Another photo from the riots shows a man wearing a CFD hat, referring to the Chester Fire Department. The former firefighter admitted to a friend that the man in the photograph was him, according to a criminal complaint.

That friend ultimately tipped off the feds to Sanford’s involvement in the riots, the complaint states.

Sanford’s friend also told investigators he had traveled to the nation’s capital on a bus with a group of people. The group, the charging document states, had “gone to the White House

and listened to President Donald J. Trump’s speech and then had followed the President’s instructions and gone to the Capitol.”