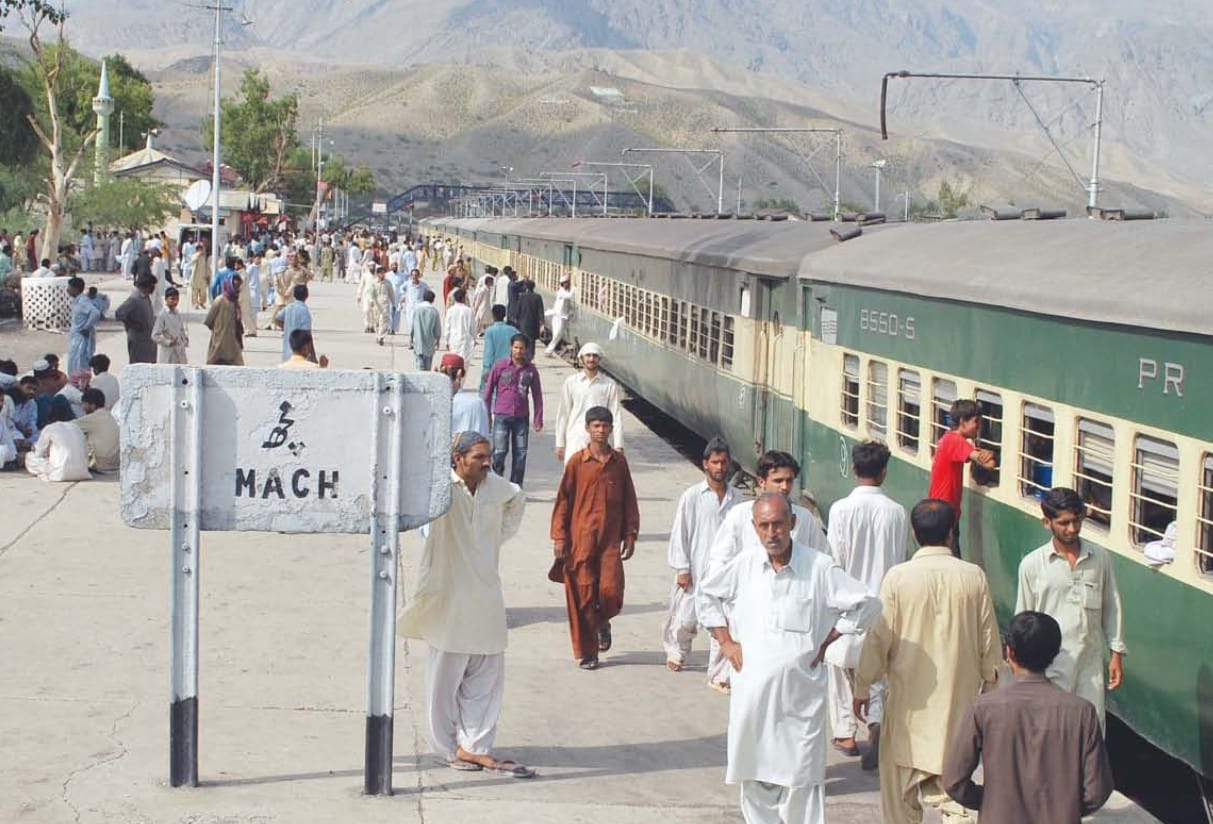 The militants killed at least 11 coalminers in the Mach area of Balochistan on January 3, this year.

Moazzam Ali Jatoi, an official of the Levies Force said that an initial investigation revealed—the attackers identified the miners as being from the Shia Hazara community and the gunmen kidnapped them for execution, leaving others unharmed.

A powerful picture, Army Chief meets the families of the 11 Hazara coal mining victims who were brutally killed in Mach- Bolan Balochistan. pic.twitter.com/G7E6bl7dR1

The Islamic State group Daesh-also known as ISIS claimed responsibility for the massacre.

The ghastly attack sparked nationwide demonstrations and sit-in protests by the members of the Shia Hazara community, including other Shias for three consecutive days.

In the past, persons of the Shia ethnic Hazara minority have been targeted by Sunni extremist outfit ISIS in Afghanistan and Pakistan.

Prime Minister Imran Khan repeatedly said: “India is backing ISIS in the region…It is unfortunate that terrorists targeted Hazara workers in thinly populated area of Balochistan…It is a part of that wider plot hatched by India to destabilise the country and stir sectarian divide”, lauding efforts of “Inter-Services-Intelligence (ISI) for foiling a number of terror plots aimed at targeting the religious leaders and creating chaos in the country.”

Federal Information Minister Shibli Faraz stated that the shootings in Mach were “condemnable and saddening…Foreign enemies are making constant efforts to destabilise Pakistan.”

Although, in the past, Pakistan faced various kinds of subversive activities, yet foreign hostile elements accelerated sectarian violence as part of their unfinished agenda to weaken the country. In this respect, Balochistan province and especially its Hazara Shia community became particular target of terror assaults.

Besides other similar tragic incidents in Balochistan, the deadly suicide attack killed more than 100 persons of the Hazara Shias in Quetta at Kirani Road, Hazara Town, on February 17, 2012. In reaction, a nationwide demonstrations and sit-in protests by the Shias enveloped various cities and towns of the country. Hazara Shias demanded the government to take immediate action against the [banned] extremist militant group, Lashkar-i-Jhangvi.

A similar sort of protest took place, after suicide bombers killed 92 people of the Shias of the Haza community in Quetta on January 10, 2013. For that deadly attack Lashkar-i-Jhangvi had owned responsibility.

However, sporadic sectarian violence against these Muslim Shias cannot be seen in isolation, as these are part of the multiple anti-Pakistan designs of the foreign enemies.

It is notable that secret agencies like American CIA, Israeli Mossad and Indian RAW were behind sectarian bloodshed in Pakistan, especially Balochistan.

In fact, the US had planned to spark a civil war between the Sunnis and Shias in wake of global war on terror.

For the purpose, a study of the Rand Corporation-a leading think tanks, titled ‘US Strategy in the Muslim World After 9/11’ was conducted on behalf of the then US Deputy Chief of Staff for Air Force. The report released on December 27, 2004, which advocated that Sunni-Shia sectarian division should be exploited to promote the US objectives in the Muslim World.

The report was first implemented in Iraq. In this context, CIA also got the services of Mossad and RAW to fuel sectarian violence in Iraq. In 2004, major terror-attacks were carried out against the Shias in Karbala and Baghdad. Afterwards, a chain of Shia-Sunni clashes started between Iraqi Shias and Sunnis, targeting each other’s mosques, religious leaders through bomb blasts, suicide attacks etc.

After Iraq’s experiment, more deadly pattern of sectarian strife had been conducted in Pakistan. While in Balochistan sectarian assaults on Shias, particularly on Hazaras continued in order to fuel sectarian riots in the province. On many occasions, Shia pilgrims were killed by the unidentified gunmen who targeted passenger vehicles, carrying them from Quetta to Iran.

In this regard, some banned religious outfits like Lashkar-i-Janghvi and the Sunni militant group, Jundollah (God’s soldiers) which claimed responsibility for a number of terror assaults on Shias, especially of Hazara community in Balochistan, get arms and ammunition from RAW and CIA. These foreign-backed militants groups were also behind target killing of many Sunni and Shia leaders, political figures, bomb blasts etc. in order to achieve the covert aims of the US, India and Israel.

Jundollah also conducted many subversive acts in Iranian Sistan-Baluchistan. In this context, Tehran had directly accused CIA of funding these types of terror attacks.

Hinting towards America, Iran’s Supreme Leader Ayatollah Khamenei had disclosed, “The bloody actions being committed in Iraq, Pakistan and Iran are aimed at creating a division between the Shias and Sunnis…those who carry out these terrorist actions are directly or indirectly foreign agents.”

Earlier, at a joint press conference on November 14 and a joint press briefing on November 23, 2020, Director General (DG) Inter-Services Public Relations (ISPR) Major-General Babar Iftikhar and Foreign Minister Shah Mahmood Qureshi unveiled a dossier containing “irrefutable evidence” of India’s sponsorship of terrorism in Pakistan. They revealed: “India is sponsoring terrorism from its soil…financing and supplying weapons and equipment to various militant outfits operating on Pakistan’s soil…India is using terrorism as instrument of its foreign policy…RAW has given banned organizations the task to target [Major] cities…Indian embassy and consulates in Afghanistan have become a hub of terror sponsorship against Pakistan…An amount of US$5 million has been given to the Balochistan Liberation Army and the Balochistan Liberation Front…India raised a 700-strong militia to sabotage CPEC [China-Pakistan Economic Corridor]…India is destabilizing Pakistan…We have apprehended a RAW-sponsored sleeper cell in Karachi, which wants to target important personalities to create unrest in the country…India united Tehreek-e-Taliban Pakistan with banned dissident [Terror] organizations…Indian intelligence agencies are also trying to establish Daesh-e-Pakistan…has recently shifted 30 terrorists of Daesh to Pakistan.”

In its latest report, titled “Indian Chronicles”, the EU DisinfoLab, published on December 9, last year, exposed an Indian disinformation network of fake news on social media, operating since 2005 to discredit nations, particularly Pakistan. It aims to reinforce pro-Indian and anti-Pakistan and anti-Chinese feelings.

Notably, Pakistan’s Armed Forces, particularly Army have successfully broken the backbone of the foreign-supported terrorists by the military operations, while ISI has broken the network of these terrorist groups. So, peace was restored in country’s various regions, especially in Balochistan and Khyber Pakhtunkhwa provinces and Karachi.

In the recent past, some terror attacks were carried out in Karachi, Balocistan and Khyber Pakhtunkhwa provinces—country’s some other areas, leaving several people, including some personnel of the security forces dead.

In this connection, the UN report of July 26, 2020 pointed out: “The banned Tehreek-e-Taliban Pakistan and its splinter group Jamaat-ul-Ahrar continue to target Pakistan from their bases in Afghanistan…the significant presence of ISIL-K (The Islamic State of Iraq and the Levant Khorasan) in Afghanistan”, which the UN warns “now pursues a global agenda.”

Nevertheless, killing of Hazara Shias is part of the strategic game of US, Israel and particularly India to create unrest in Balochistan which is central point of the CPEC. Their intelligence agencies are weakening Pakistan and want to damage the CPEC project which is part of China’s One Belt, One Road (OBOR) initiative or BRI. Washington and New Delhi have already opposed this project.

At this critical juncture, Pakistan’s religious scholars, especially those of Sunni-Shia sects and media must create selfless unity among various factions to castigate the sinister designs of those external powers which are making attempts to create unrest in the country through terrorism-related attacks and sectarian assaults, as noted, recently, on the Hazara Shias.