[ Editor’s Note: Dominion is on the attack now, something it should have done when the attacks started, as then it could have provided its own witnesses in the early court cases, but better late than never.

It started with the three pro-Trump media platforms that quickly backed off the massive election fraud claims, usually stating that such claims were made by guests, not the network.

Sidney Powell has a $1.3 billion lawsuit against her now, with Rudy G the next in line. The American Thinker website has been taking the cue from those in front of it to avoid hopeless legal costs stating, “These statements are completely false and have no basis in fact.”

I have not seen anything filed against Trump’s campaign committee, which is where a bunch of cash is sitting, and then of course Trump himself personally. We will watch to see if he stays quiet to avoid getting sued personally by Dominion to add to his woes.

But getting sued is the least of Trump’s problems. To a non-lawyer like me, the fake stolen election claim is the bedrock of Trump’s incitement of his base for the attack on the Capitol, which he wanted to keep riled up for donations and also as a last trigger attempt to hold on to office and its much-needed immunity cover.

That would explain why his legal team kept filing new court cases, often using the same rejected claims over and over. Trump viewed The Steal fairytale as his lifeboat. Toward the end, panic must have set in, which triggered the reckless attempt to ask the Georgia Secretary of State to simply flip that election to Trump, which exposed him to that state’s criminal prosecution and killed any presidential immunity.

The weirdest part of that was his making such an overt move when flipping just one state did not win the brass ring for him. So in the end, rather than just losing the election, he now is impeached and facing a potential Senate conviction, and being charged criminally.

Already heavily stressed financially due to pandemic strain on his businesses, his brand is toxic, so is the great businessman, as I had predicted early in his administration. He has fallen by his own hand in his grasp for greed and endless fame, and by attempting to establish a fascist state within the US, with the Trumpers as his neo-Brownshirts and rabid Republicans as his political mafia capos.

Senator Josh Hawley is following in Trump’s shoes, having falsely claimed that an Antifa mob attacked his house and family. But a one hour video of the protest event has quickly emerged showing no such thing happened.

The cops came, explained to the crowd that they were in violation of the zoning rules, asked them to disperse, which they did. Did Hawley file a false police report? We will be looking at that soon. Could that get him censured by the Senate? The saga continues, because as Kirschner says, “justice matters”… Jim W. Dean ] 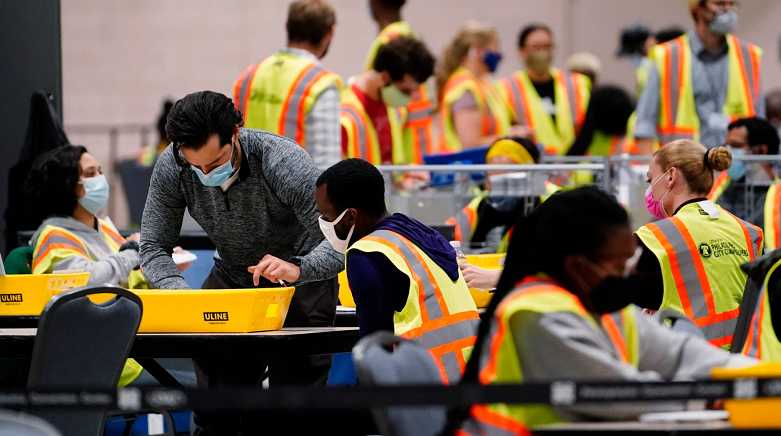 by Jerod MacDonald-Evoy and the Arizona Mirror

Arizona Republican Party chairwoman Kelli Ward has received a cease-and-desist letter from attorneys representing Dominion Voting Systems over claims she has made that the machines “rigged” the November election to ensure Donald Trump lost.

Ward, along with 150 other people, were served with cease-and-desist letters in recent days and warned to preserve documents related to claims that they had made that Dominion machines were faulty or had been used to rig the election in favor of Joe Biden, according to The Washington Post.

Some places, like the right-wing site American Thinker, have already retracted the imagined claims about Dominion that were pervasive in the following weeks after the election.

“These statements are completely false and have no basis in fact,” the website said in a statement referring to articles it published claiming that, among other things, Dominion conspired with the Venezuelan government to “steal” the election.

Ward has claimed that Dominion software changed votes in other states in a video that claims to “expose” Dominion, and the Arizona Republican Party has pushed similar claims in another video featuring Congressmen Andy Biggs and Paul Gosar. That video compared the November election to an episode to the Netflix series “House of Cards.”

The Arizona Republican Party did not respond to a request for comment.

The letter, which was sent on Dec. 28, demands that Ward preserve all emails, text messages, voice mails and other communications she has had in regards to Dominion. It also asks her to preserve communication with any member of the Trump campaign, as well as with his legal team.

Maricopa County has been using Dominion software for the past decade and US election security officials denounced claims that the software was breached or manipulated in any way.

Misinformation and conspiracy theories such as “Sharpiegate” spread like wildfire in the days following the election in Arizona, including claims that out-of-state volunteers were counting ballots and that Republicans were not present during the process. All of those rumors were unfounded.

Among those who Dominion is looking to go after for the spread of conspiracy theories related to their company are Trump ally and MyPillow chief executive Mike Lindell who the company has requested an apology from late last year and earlier this year.

This report was first published by the Arizona Mirror