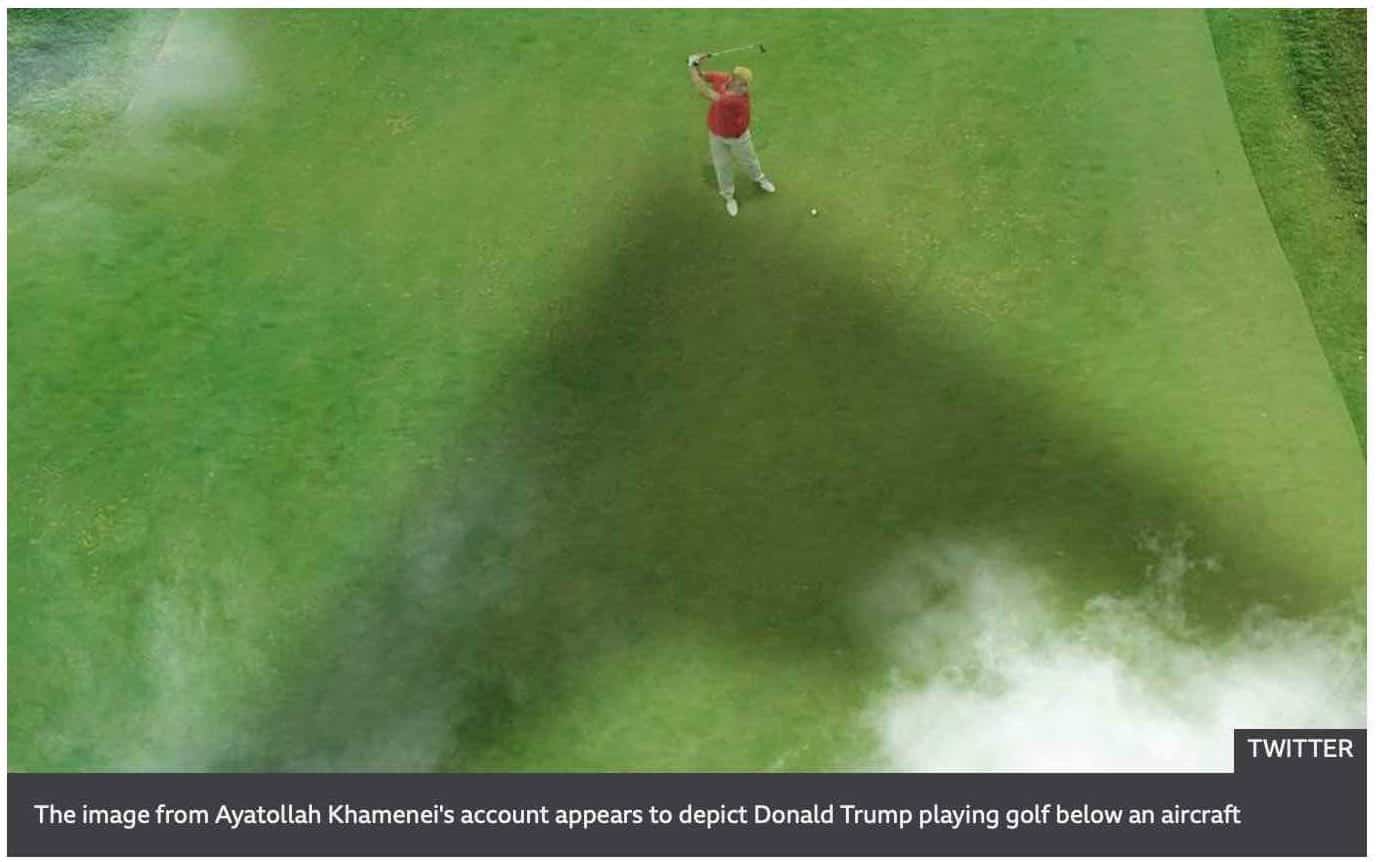 As philosophy professor Sterling Harwood and I agreed during the final minutes of FFWN (watch above, story links HERE) it is truly heartwarming to see the way Iran’s Supreme Leader, Imam Ali Khamenei, has fondly wished Trump a happy and carefree retirement. The Iranian rahbar tweeted an image of an Iranian “shadow drone” casting a mercifully cooling shade over the poor orange-skinned sweaty ex-president, protecting Trump from sunburn and the potentially mortal threat of skin cancer during a sweltering Florida golf outing.

We were also happy to report that the Little Red Diet Coke Button Is No Longer in Reach of Trump’s Stubby Little Fingers. Since Trump was summoning and drinking a dozen diet cokes a day, removing that toxic red doomsday coke button will, like the Iranian shadow drone, be highly beneficial to Trump’s physical and psychological health.

And speaking of doomsday buttons, a little green or should I say gray MJ-12 source tells us that during Trump’s tenure the OTHER little red button—the nuclear doomsday button—was rewired by aliens so that if Trump had pushed it, an ejection seat would have propelled Trump upward through a retractable Oval Office ceiling and into orbit, from whence he would have dropped precipitously, ass-first, like an obese Slim Pickens without a missile, onto whatever enemy territory he had been intending to strike. “Too bad he didn’t launch against Iran like I kept telling him to—they would have known what to do with him,” the burning shade of the late Sheldon Adelson commented from his permanent home in the 7th circle of hellfire.

* Americans were urged by the New York Times to convert to a new religion: “Faith-Based Democracy.”

*The University of Vermont study showing that mask wearers transmit more COVID-19 than non-mask-wearers didn’t happen, and if it did, it couldn’t possibly be right, and even if it was right it would just mean that you should always pretend not to be wearing a mask while you actually are wearing a mask so you will unconsciously tend to limit your contacts more, like non-mask-wearers do.

*There is plenty of evidence that Paul McCartney died in 1966 and then rose from the dead in the form of an imposter. The problem is, that evidence remains unconvincing…to everyone except Jim Fetzer and other followers of the Paulene creed.

*We have been ordered by America’s leading Jewish publication to stop counting the Jews around Biden…which is OK, since I can’t count that high anyway without first taking off my shoes and socks and finally reaching for my calculator.

*A Jewish judge has ruled that internet monopolies are free to censor and erase all “incendiary” speech (meaning speech Jewish oligarchs don’t like?)

*For the first time ever, a majority of Americans believes the mainstream media is deliberately and knowingly lying to us. The other 44% are lining up to buy the Brooklyn Bridge after the New York Times reported it was for sale.

And finally, the World Health Organization and Center for Disease Control have jointly announced that due to an uncontrolled outbreak of irony, satire, and sarcasm, anyone exhibiting symptoms must be removed from the internet and quarantined. Ironists, satirists, and sarcastic people have collectively responded “yes, of course we’ll be happy to obligingly self-quarantine if it makes you happy” (roll of eyeballs). The WHO and CDC are reportedly not satisfied with that response, and are planning draconian measures to protect the public from sardonic skepticism and misguided mirth. Stay tuned to False Flag Weekly News for updates.