Breaking: Minority leader McConnell has backed off on his filabuster demands.

[ Editor’s Note: The showdown begins between Trump and the Senate. The latter is also on trial for whether the Republicans will vote the interests of their country, or for their own political futures. My bet would be on the latter.

And no, it is not because I am a meanie. We saw 140 Republican House members vote to not certify the election after the Capitol attack, under the thin veil cover of wanting to protect their right to contest. So be it. They made their bed so let them lie in it.

The Senate, with apparently a higher class of people, only had a handfull of holdouts not supporting certification. They chose wanting the Trumper political support over the country and we are still waiting to see what the Senate will do with Hawley and Cruz, who are now the Butch and Sundance of the Senate.

But while Trump has been cooling his heels, he is now playing a card he still holds, one recently confirmed in the post capitol attack polls, with the shocker that 45% of Republicans say they support the attack on the Capitol, a strong indication they are rabid Trump people and unrepentent seditionists. Imagine that.

So Donald is now flexing his remaining political muscle to influence his second impeachment trial by threatening any Republican senators that vote to convict that they will be on his doo doo list if they do.

Trump knows he is facing a storm of criminal investigations and possible convictions. When stressed he has always fallen back on his main comfort zone, that the best defense is a good offense. We will now get to see what the inside of the Republican party is made of, and it may not be pretty, as we recently saw with the ‘protestors’ … Jim W. Dean ] 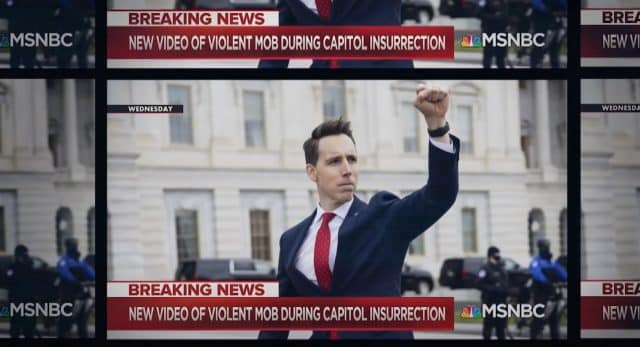 Former US President Donald Trump has conveyed messages to Senate Republicans, indirectly warning them against voting in favor of his impeachment.

The US House of Representatives on Monday formally charged Trump for “incitement of insurrection” in a deadly riot on Capitol Hill earlier this month, putting his second impeachment trial into motion.

The US House of Representatives on Monday formally charged Trump for “incitement of insurrection” in a deadly riot on Capitol Hill earlier this month, putting his second impeachment trial into motion.

Brian Jack, former White House political director to the president, spent the weekend informing Republican senators that Trump intended to keep his imprint on the GOP, according to the POLITICO on Monday.

Trump wanted the word to get around he was still a Republican — and for many — still the leader of his party, it said. The article pointed out that this message was a fresh warning to Republicans pursuing Trump’s conviction that the former president might wreak vengeance against them.

The ex-president has already threatened his critics in the Senate GOP with a scheme to start a third party.

Despite Trump’s threats, some of the Republican senators have used strong words to condemn his role in the Jan. 6 riot on Capitol Hill carried out by Trump loyalists. Sen. Pat Toomey (R-Pa.), who is retiring next year, has conceded that Trump committed impeachable offenses.

Sen. Mitt Romney (R-Utah), who was the sole GOP senator who voted to convict Trump in the first impeachment trial, said Trump had the potential to influence the Republican party. However, his influence “was significantly diminished by his perpetuation of the ‘Big Lie.’

Trump claimed that he won the 2020 presidential election. He insisted that his victory was stolen from him, repeatedly telling his supporters to “stop the steal”.

Trump’s claim of winning the tarnished election lacked sound proof. I don’t think the facts have borne that out,” Romney added. “Clinging to the lie will diminish his influence over time.”