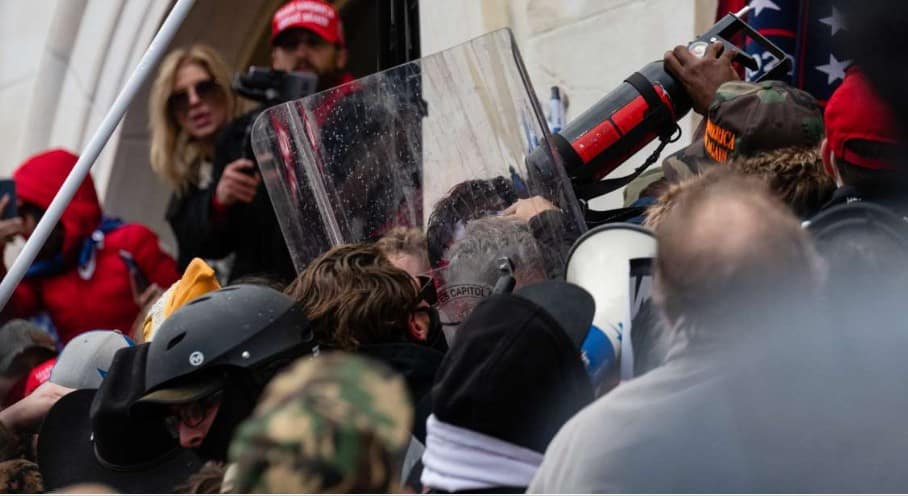 Raw Story: As Joe Biden and Kamala Harris took their oaths of office last week, it was revealed that FBI Deputy Director David Bowdich will be retiring soon. Paul Abbate, the FBI No. 3, will be promoted from associate deputy director to Bowdich’s post.

This is exactly why we may be entering a prolonged period of right-wing terrorism in the USA.

The @TheJusticeDept, and @FBI debate not charging some of the @CapitolSiege insurgents. https://t.co/SjVxPsXq7B

At least for the moment, Joe Biden has left Christopher Wray as FBI chief — partly in deference to the bureau’s supposed independence, and also because on the face of it Wray doesn’t look like a Trump guy. Both before and after the election, Donald Trump was said many times to be on the verge of firing Wray.

But that was only because the FBI director did not yield to the outgoing president’s most extreme, extravagant and baseless requests — such as indicting Barack Obama and Biden over absolutely nothing — and doesn’t mean Wray should stay on.

Bowdich’s early retirement and departure is likely linked to the Capitol events and the perception of FBI inaction toward far-right terrorism, an issue I have raised in more general terms in a previous Salon article. A lapse as grievous as we saw on Jan. 6 is hardly due to incompetence at that level. We are most likely talking about bias.

This is why, as a top priority, Vice President Harris should put her lawyer hat on once again and lead, together with Congress, a reform of the FBI legal standards on terrorism, as they are applied to the progressive left and the far right.

The Capitol attack was not an unpredictable, once-in-a-lifetime “black swan” event. It was part of a pattern. It’s not like a meteor hit Washington out of nowhere. These right-wing groups are well known, and closely followed by the FBI.  read more…

Far-right extremism in the US is deadly serious. What will Biden do about it?

The Capitol attack was the tip of the iceberg. The Biden administration must confront the full threat of the US far right

“The cry for survival comes from the planet itself, a cry that can’t be any more desperate or any more clear. And now a rise of political extremism, white supremacy, domestic terrorism that we must confront and we will defeat.”

This sentence, in Joe Biden’s inauguration speech, was manna from heaven for anti-fascists, including me, and in many ways a direct refutation of President Donald Trump’s “American carnage” speech four years ago.

After decades of presidents minimizing the white supremacist threat, and four years of emboldening and protecting it, finally there is a president who dares to call the threat by its real name: white supremacy.

My relief was somewhat short-lived, however. A few days later Biden both narrowed and broadened his focus. While there were still implicit references to the far right, most notably the storming of the Capitol on 6 January, the focus was now on “domestic violent extremism”. Why we needed yet another neologism, rather than the common term “domestic terrorism”, was not explained – nor was the fact that most definitions of extremism include the threat or use of violence, which makes the phrase “violent extremism” redundant.

But leaving aside semantics, much more problematic was the generalization of the threat. Did jihadis storm the Capitol? Were “eco-terrorists” involved? Or antifa?

No, the only people storming the Capitol were a broad variety of conspiracy theorists, white supremacists, and other far-right adherents. (To make this absolutely clear, given that conservative and far-right media and politicians keep spreading this lie, antifa was not involved in the storming of the Capitol.)  read more…

CAPITOL ATTACK WAS CULMINATION OF GENERATIONS OF FAR-RIGHT EXTREMISM

But an expanded war on terror would threaten legitimate resistance to state violence.

THE FLAG OVER the Capitol in Harrisburg, Pennsylvania, hung at half-staff Sunday. Set atop a hill overlooking the Susquehanna River, the entrance was guarded by police in riot gear. Lower down, at the street level, intersections were blocked by law enforcement vehicles. On each of the Capitol’s four sides, camouflaged National Guardsmen in masks clutched rifles to their chests.

A handful of stocky, middle-aged men with wraparound sunglasses lingered about. Whether they were cops or militia was unclear. If they were trying to keep a low profile, their efforts were falling short.

Police officers on horseback rode down the middle of North 3rd Street, past Sammy’s Authentic Italian Restaurant and Old Town Deli, toward Liberty Street. The horses’ hooves clacked against the pavement. A young couple sat on stoop taking it all in. Between them was their 3-year-old boy, dressed in a winter coat and light-up sneakers.

The man was 27, and the woman was 20; both were Black and lifelong residents of the city. They asked that their names not be used in a story. Given that rioters carrying Confederate flags had just laid siege to the nation’s Capitol, leaving five people dead, and that law enforcement in Harrisburg was bracing for similar acts of insurrection, it felt like a reasonable request.

“It’s crazy,” the woman told me, as she looked out at the armed forces occupying her city’s streets. The man agreed: “It’s just shocking that all of this comes after a presidential election.” 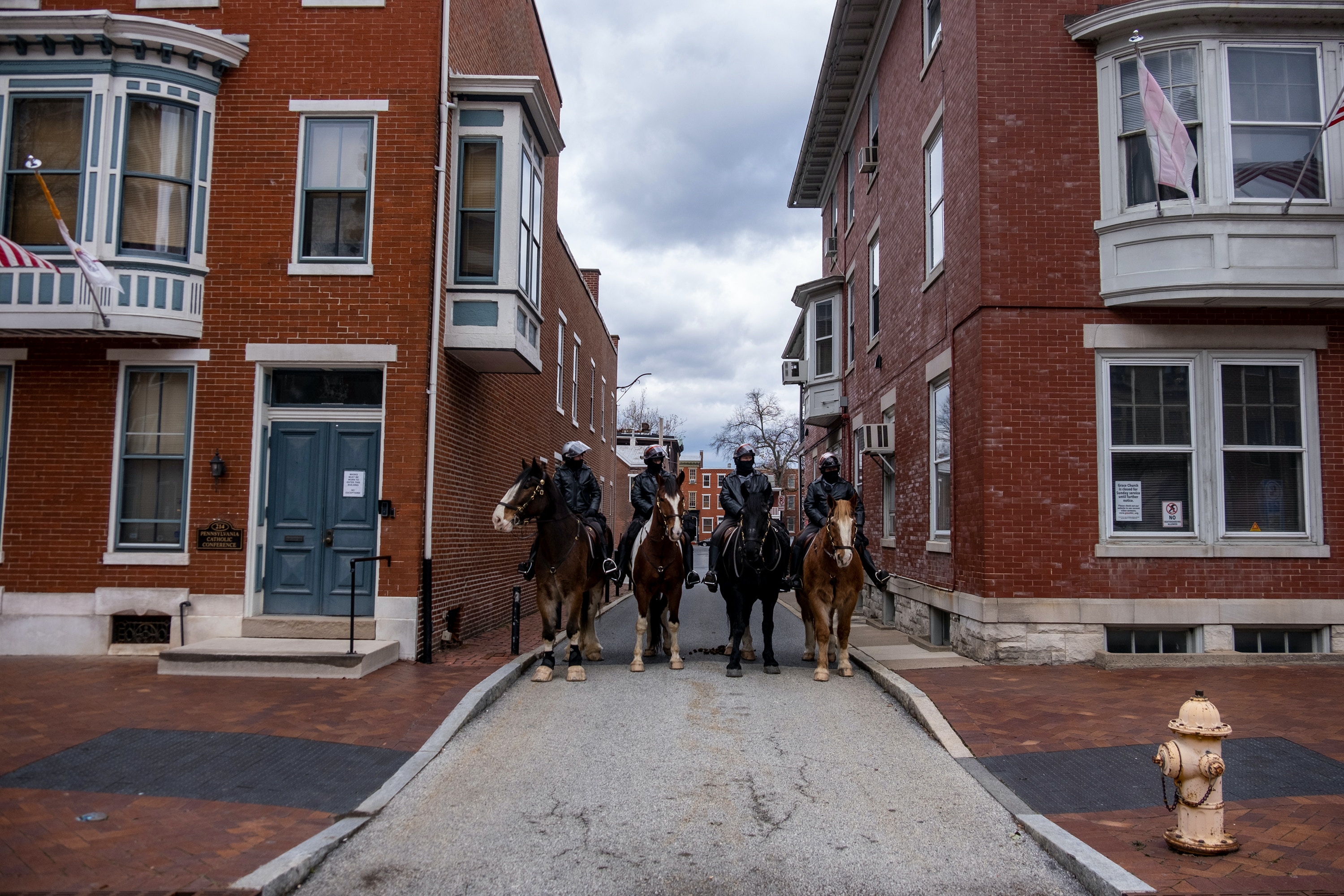 Mounted police are seen along a residential street in response to threats against the Capitol in Harrisburg, Pa., on Jan. 17, 2021.

Photo: Ron Haviv/VII/Redux for The Intercept

Like just about everywhere else in the country, Harrisburg was touched by last summer’s protests against police brutality and killings. The demonstrations cast a new light on the city’s unique history. In the mid-19th century, the area of Harrisburg where the Capitol now sits was known as the Old Eighth Ward: a Black cultural hub and the city’s most diverse area.