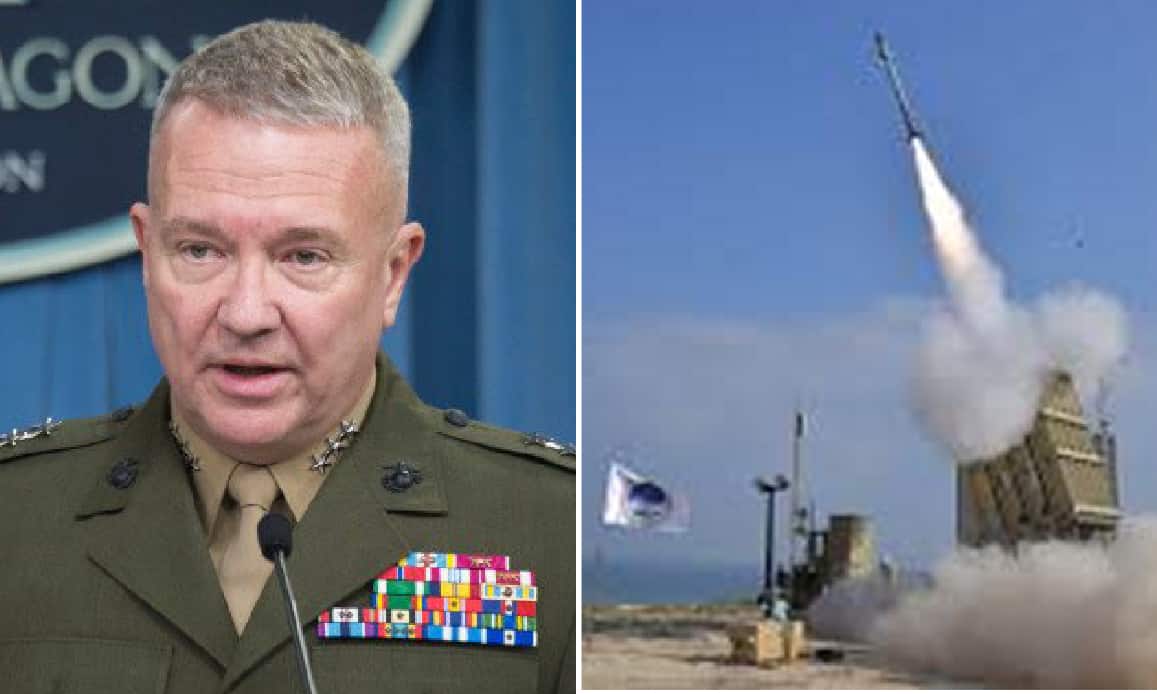 “Our goal was to deter a war.” This is what General Kenneth Frank McKenzie, commander of CentCom, the central command of the US Army in the Middle East said. But if on the one hand the senior officer believes that relations between United States and Iran are in a “period of opportunity” on the other hand does not reveal the Pentagon’s secret projects in the Persian Gulf and the Mediterranean Sea.

His statements released to journalists during a recent air trip and reported by the American specialized site Defense One, in fact, do not reveal the background of the agreement between Washington, Tel Aviv and the countries of the Arabian Peninsula with which Israel has stipulated, in the last weeks of the administration of Donald Trump, the “Abrahamic Agreements” in memory of the historic Abrahamic tribes that are the common religious denominator between Muslims, distant descendants of the Ismaili of Abraham’s son, and the Jews of the most important patriarch of the Old Testament.

U.S. Central Command’s Gen. McKenzie confirmed that there were “heightened threat streams” from Iran during the months leading up to Biden’s election and inauguration, but said that the United States was able to maintain what he has long termed a “contested deterrence” during what has become increasingly clear was an unnerving and unpredictable moment.

Indeed, while the diplomacy of the new administration of President Joseph Biden tries to give an imprint of dialogue in the Middle East also open to Iran, which came out of the JOCPA pact on nuclear non-proliferation in response to the abandonment by President Trump, the strategy military proceeds inexorably in the Mediterranean Sea and the Persian Gulf.

Israel, as reported by the newspaper Haaretz, has in fact given the green light to the installation of the Iron Dome anti-missile system in some countries of the Arabian Peninsula without revealing where the US will be able to install the defense batteries purchased by the Israeli industry Rafael Advanced Defense Systems and Israel Aerospace Industries.

“I am certain that the system will help the U.S. Army defend American soldiers against ballistic and aerial threats,” said Defense Minister Benny Gantz at the ceremony for delivering the second batterys. Because of the sensitivity of the matter for the Americans, Israeli officials are refusing to reveal in which countries the Iron Dome interceptors will be deployed.

But behind closed doors, Israel gave its tacit agreement to the Americans to place the batteries in order to defend its forces from attacks by Iran and its proxies, according to Israeli officials.

Not only in the final days of his presidential term Donald Trump decided to move Israel from the jurisdiction of the European Command (Eucom) of the US military to Centcom, which is responsible for the command and control of all US military forces in the Middle East, including Egypt, Central Asia and parts of South Asia.

US CENTCOM CHIEF SOON IN ISRAEL

“Israel’s passage within Centcom should pave the way for more open military cooperation between Israel and the Arab states of the Middle East, in particular the United Arab Emirates and Bahrain, with which Israel has signed diplomatic normalization agreements last September ,” writes Agenzia Nova, a communication media sponsored by the Italian military industry Leonardo, strongly linked to Qatar and the Turkey of the Muslim Brotherhood, as highlighted by Gospa News in the reportage Lobby Armi – 4.

This historic variation of Centcom’s area of ​​control will not only make the Pentagon much more autonomous from NATO’s Brussels policies in Israel but allow for a closer dialogue between the American armed forces present in the Persian Gulf and those of the Israeli Defense Force (IDF).

In confirmation of this Commander of CENTCOM, Gen. Kenneth McKenzie, will arrive in Israel later this week in what will be the first high-level visit by a top American official since Joe Biden was sworn in as president last week. This was reported by the Israeli newspaper “Jerusalem Post”, stressing that this is the first high-level visit by a senior US official since Joe Biden’s inauguration in the White House.

McKenzie’s upcoming visit – first revealed by Walla News Defense Analyst Amir Bohbot – was confirmed by government officials and comes at a time of increased tension in the region due to Iran’s continued aggression throughout the Middle East» wrote the Zionist media forgetting to mention the continuous attacks of Tel Aviv aviation in Syria, Lebanon and Iraq against the positions of the Iranian militiamen, allies of the Shiite governments.

But that is not all. According to what is reported by the Italian gepolitics media Inside Over, Israel is very concerned that the 5 + 1 nuclear deal (US, UK, France, China, Russia and Germany plus Iran) will allow Tehran to continue development centrifuges aimed at enriching uranium. As it happened in the Qom power plant, the most protected on earth because it was underground, where there was an increase in the production of atomic material after the killing of General Qasem Soleimani, commander of the Quds Forces, the special department for the foreign missions of the Pasdaran (the Guards of the Iranian Islamic Revolution).

General Yaakov Amidror, former head of the National Security Council, and very loyal to Prime Minister Benjamin Netanyahu, as reported by Amos Harel on Haaretz, in a meeting at the Jerusalem Institute for Strategy and Security, said:

“In a situation where the United States return to the old nuclear agreement with Iran, Israel will have no choice but to act militarily against Iran to prevent it from manufacturing a nuclear weapon ”.

“The concept is therefore very simple: if America negotiates for an agreement that Netanyahu has always considered a threat to Israel, Israel’s forces will attack before Iran has a chance to equip itself with a nuclear device. This is not a novelty for the Israeli strategy: one of its pillars, the Begin doctrine, foresees precisely hitting the opponent before it is even possible that it is equipped with a weapon capable of rebalancing the military supremacy over the region” writes Italian Journalist Lorenzo Vita on Inside Over announcing an imminent and important Tel Aviv mission to the US.

“Precisely for this reason, Netanyahu has already set to work. The idea is to send the head of the Mossad (Israeli counterintelligence – ed), Yossi Cohen, to Washington, to discuss the Jewish state’s requests for a possible negotiation for the return of the United States to the 5 + 1. According to Channel 12, Cohen will be the first high-profile Israeli name to meet Biden as the president of the United States. While on Saturday evening, the national security adviser, Meir Ben-Shabbat, phoned his US counterpart Jake Sullivan” adds Inside Over.

According to the Israeli newspaper, Israeli TV Channel 12 broke the news on Saturday night, adding that Cohen, a trusted Netanyahu ally, would be the first senior Israeli official to meet with Biden and the chief of the CIA.

Israel is afraid that reviving Iran’s nuclear deal would help it enrich uranium and relieve its economy, the Israeli newspaper said.Channel 12 reported that Cohen will present Israel’s demands to Biden, which are: Iran must halt the enrichment of uranium, stop producing advanced centrifuges and cease supporting terror groups, foremost Lebanon’s Hezbollah» writes MEMO.

“Israel’s goal is to present to Biden and his administration a dossier on the Iranian nuclear program that makes it impossible for the American president to re-enter the agreements as envisaged in 2015. Israel could accept this possibility only if Tehran confirms the stop. enrichment of uranium, the production of new advanced centrifuges, the end of Iran’s military presence in Syria, Yemen and Iraq and the termination of alliance relations with Hezbollah. All this then giving full access to the officials of the International Atomic Agency to control the sites of the nuclear program” concluded the Italian reporter Lorenzo Vita.

But the Quds Forces in Iraq as well as in Syria were decisive for both nations in the defeat of the Islamic State of the Caliph Al Baghdadi, leader of the ISIS extremists of Sunni Islamic origin in the war against the Shiites such as the Alawis of Syrian President Bashar Al Assad and of the his party Ba’th, of which his father Hafiz Al Assad was the maximum exponent, who ended up in the crosshairs of the Central Intelligence Agency since 1983, as revealed by the declassified documents published exclusively by Gospa News.

In addition to all this in recent days, Israel today inaugurated its embassy in Abu Dhabi, in the United Arab Emirates. This was announced by the Israeli Foreign Ministry after saying that the Gulf country has approved its mission in Tel Aviv.

Leading the representation, after the “Abrahamic Agreements”, is Ambassador Eitan Naeh, even if the physical location of the mission has yet to be chosen. Foreign Minister Gabi Ashkenazi wished the ambassador good luck and thanked the Emirati government for his decision. Israel will also open its own consulate in Dubai in the coming days. (read more).