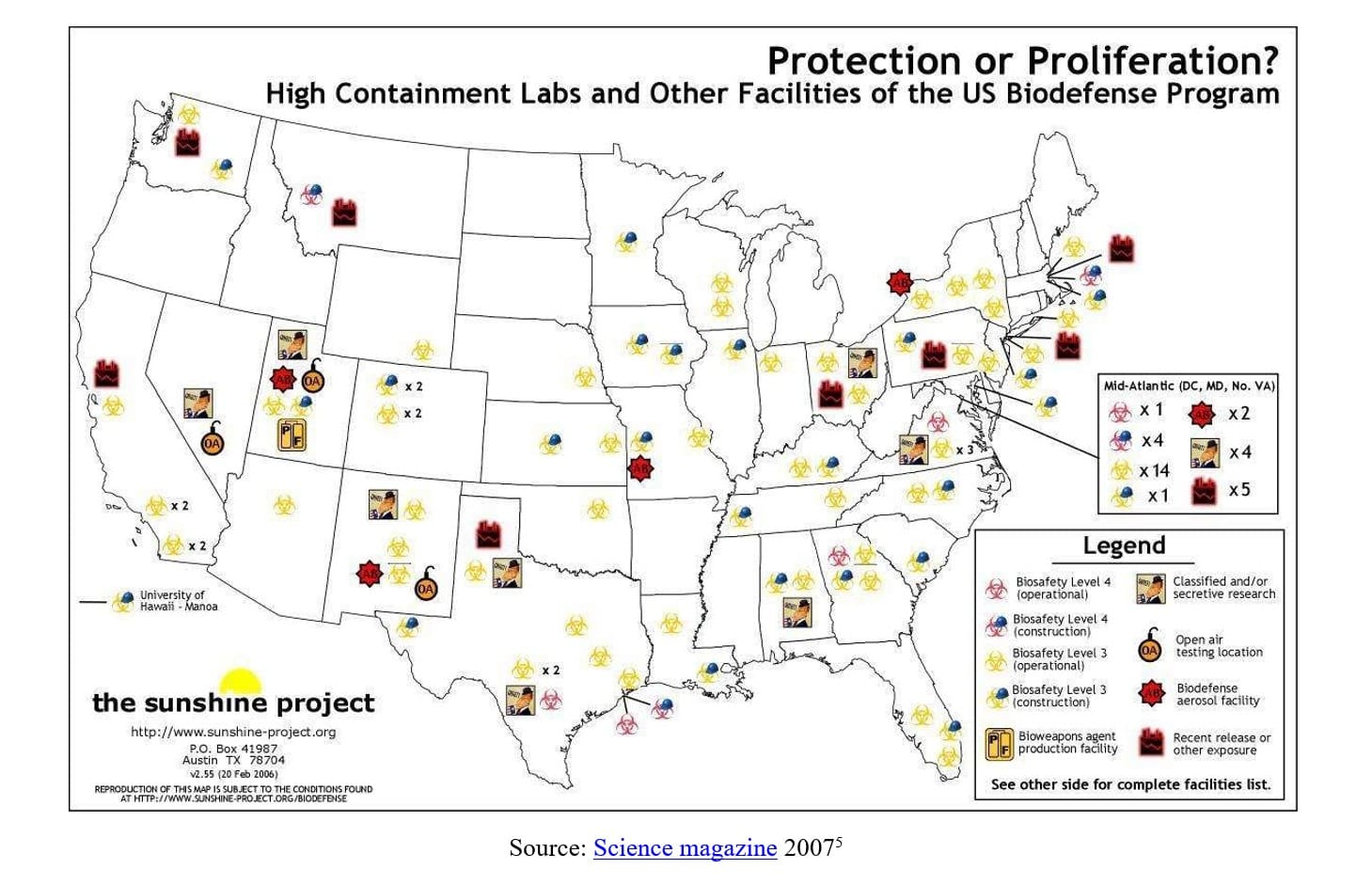 Biosafety Level 4 labs are in the spotlight as speculation swirls that Covid-19 may have emerged from such a facility in either China or the US.  In the US, the mass proliferation of high-containment germ labs since 9/11, and its track record of safety lapses, remains a concern with the renewed interest in the field of biodefense.  In light of past accidents of anthrax leaks in US labs and SARS leak in Chinese labs, there needs to be improved regulation and governance of germ labs in order to mitigate rising risks of accidents that threaten public health, redress safety lapse providing easy access of pathogens by terrorists, and prevent a biodefense arms race.

The Institute for Strategic, Political, Security and Economic Consultancy (ISPSW) is a private institute for research and consultancy. The ISPSW is an objective, task-oriented and politically non-partisan institute.

In the ever more complex international environment of globalized economic processes and worldwide political, ecological, social and cultural change, which occasions both major opportunities and risks, decision-makers in the economic and political arena depend more than ever before on the advice of highly qualified experts.

ISPSW offers a range of services, including strategic analyses, security consultancy, executive coaching and intercultural competency. ISPSW publications examine a wide range of topics connected with politics, the economy, international relations, and security/ defense. ISPSW network experts have worked – in some cases for decades – in executive positions and have at their disposal a wide range of experience in their respective fields of expertise.

About the Author of this Issue

Dr. Christina Lin is a California-based foreign policy analyst. She has extensive US government experience working on national security policy planning, including at DoD, State, and NSC, and was a research consultant at Jane’s Information Group’s Chemical, Biological, Radiological & Nuclear Assessments Intelligence Centre.

The new coronavirus has plunged the world into a pandemic crisis, and has resurrected years-long debates and worrying questions about US biodefense policy. These include the rapid proliferation of high-containment germ labs since the terrorist attacks of September 11, 2001, and ongoing governance problems with these labs.

Before 1990, there were only two BSL-4 (Biosafety Level 4) labs in the US, one at the Centers for Disease Control and Prevention (CDC) in Atlanta and the other at the US Army Medical Research Institute of Infectious Diseases (USAMRIID) in Fort Detrick, Maryland.

After 9/11, the US opened 10 more, and in a 2007 report by US Government Accountability Office (GAO) chief technologist Keith Rhodes, he observed that “a major proliferation of high-containment BSL-3 and BSL-4 labs is taking place in the United States,” with the country’s 1,300 plus “high containment” germ labs, in essence, policing themselves.1

This is disconcerting for Americans who live in states that host these labs. As biosecurity experts Filippa Lentzos of Kings College London and Gregory Koblentz of George Mason University in the US state of Virginia have argued, the proliferation of labs and scientists working on dangerous pathogens is adding to our collective risk.2 These include accidental releases, worker infections, theft and insider threats.

The most famous insider-threat example occurred in 2001, when one of the scientists at USAMRIID committed an anthrax bio-terror attack by placing the deadly agent in the mail, which killed five, infected 17 and put 20,000 Americans on antibiotics.3

Now with a renewed interest in the field of bio-terror and biodefense, US state governors and members of Congress have a vested interest in partnering with Big Pharma to obtain lucrative federal contracts to create the “Silicon Valley for biodefense” in their own states.4

However, while these labs are spread out geographically, there is no central authority that regulates them or monitors their proliferation.

Observations on the Oversight of the Proliferation of BSL-3 and BSL-4 Laboratories in the United States”, United States

4 Jennifer Tidball and Beth Bohn, “The Silicon Valley of biodefense: K-State cements status at the forefront of biodefense”, Seek

Questions then arise whether building more labs will help us fight outbreaks? Or are we Americans building too may labs in too many places?  And rather than having the labs conduct self-policing, who should have responsibility for regulating these labs?

For several years, USA Today conducted an investigation into biosecurity of US germ labs and found systematic safety failures and repeated non-compliance to safety procedures, with US GAO—the investigative arm of Congress—reaching similar conclusions regarding these lapses.6

For example, in 2015 the Pentagon discovered that one of its laboratories in Dugway Proving Ground, Utah, had inadvertently sent live anthrax to almost 200 laboratories worldwide over the course of 12 years, because the lab’s “inactivation” (removal of hazardous effects) of the pathogen was found to be incomplete.7 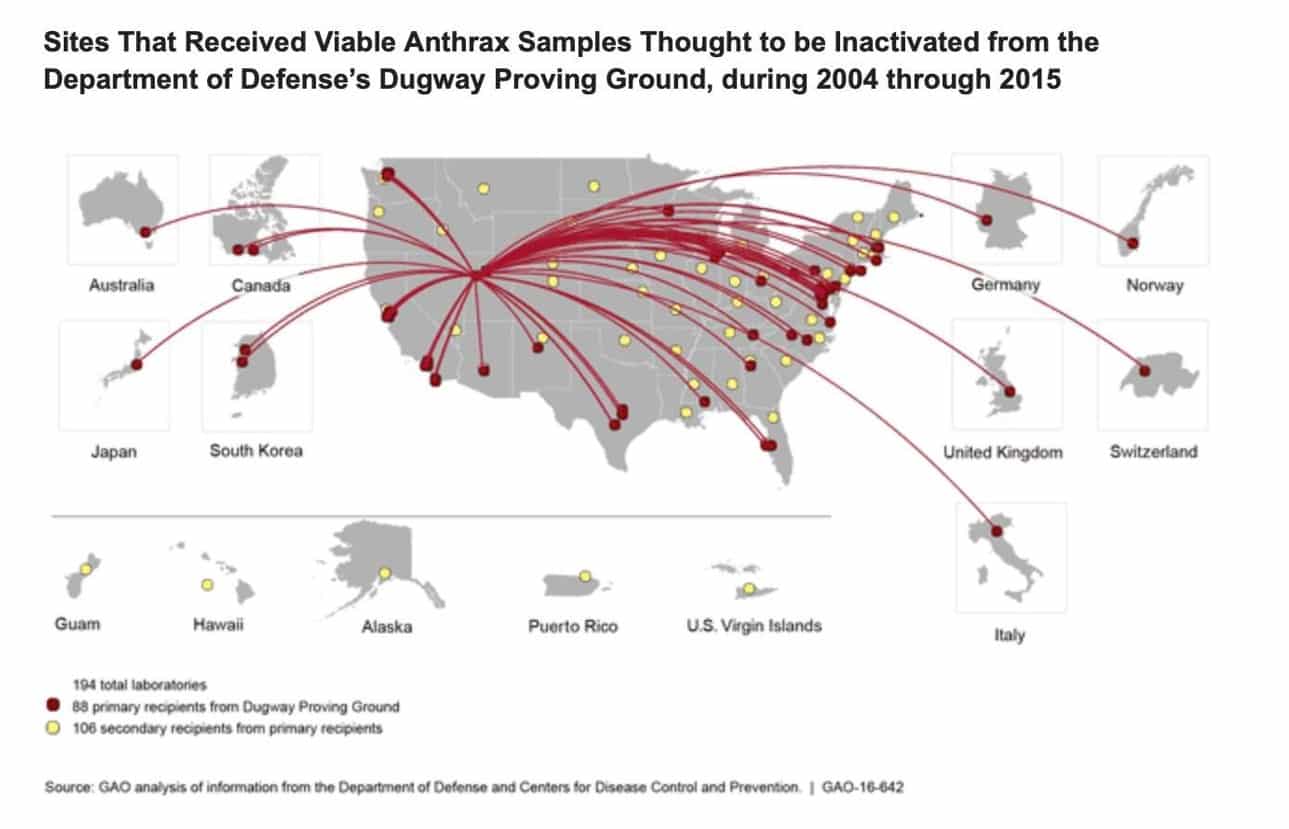 Most recently, in 2019 USARMRIID was shut down for a safety lapse, but has recently reopened and been tapped to produce a vaccine for Covid-19.[1]

However, according to a March 21 article titled “A Biosecurity Failure,” the reopening may be premature, given the lab’s history of safety lapses and mismanagement.[2]

They note how the institution has for many years battled financial mismanagement, safety violations, failure to adjust to a post-Cold War mission, leadership challenges and just before the Covid-19 outbreak, an atmosphere of “fear and mistrust.”10

Diana Digangi of ABC7 WJLA also obtained a list of the 2019 violations from the CDC, which included an individual without required respiratory protection entering a room multiple times where researchers were infecting animals with toxins and select agents, risking pathogen exposure, and another incident of a laboratory worker disposing of hazardous waste without gloves on.[3]

Other violations include: contractors finding a leak in a sewer line in 1995, only 30 meters from a steam sterilization plant where wastewater of deadly pathogens from 50 laboratories on the base is treated; Maryland officials investigated Fort Detrick in 1992 for hazardous-waste disposal violations by exploding chemicals with grenades; sloppy safety habits caused anthrax leaks from the labs in 2002; and in 2009, 9,200-plus vials (oneeighth of its stock) were discovered to be undocumented in the inventory.13

US bio labs are not the only ones with governance issues. In China, while there is no evidence in open source information that the 2003 SARS (severe acute respiratory syndrome) epidemic was caused by lab leaks, the 2004 SARS cases were indeed caused by leaks from a Beijing lab.14

In March 2004, two lab researchers were first infected by SARS, which caused a small outbreak, although by May that year the World Health Organization declared it was contained. In this case, Beijing punished five officials of the Chinese Center for Disease Control and Prevention (China CDC) for negligence over lab safety.15

However, given the opaque nature of incident reporting in China, the number of safety lapses is likely much higher and at least comparable to those in the US.

In light of these developments, there needs to be better regulation and governance of germ labs in different countries. Transparency and information exchange are important to build confidence and prevent a biodefense arms race, as well as regulating the proliferation of these labs in order to mitigate attendant risks of accidents, threats to public health and safety lapses providing easy access of toxins and select agents by terrorists.

Remarks:  Opinions expressed in this contribution are those of the author.

This article first appeared in Asia Times on April 6, 2020.