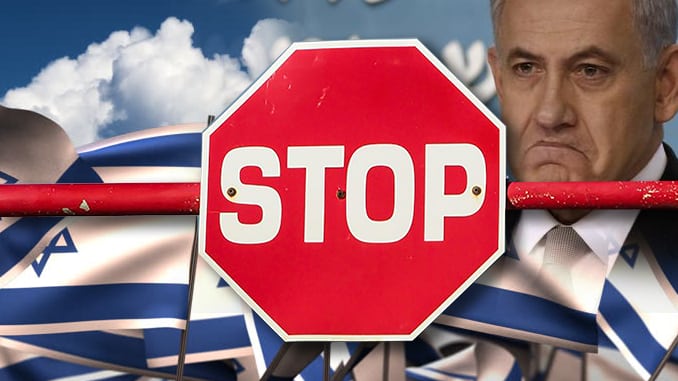 Philip Giraldi nailed it again. Trump, he argues, was in concert with the Israeli regime through and through. He gave them virtually everything they wanted. I would argue that one reason why Benjamin Netanyahu himself is scared of the Biden administration is that he is not going to get everything from Biden at all.

It can be argued that in all probability, Biden will kick him in the rear when he comes to Iran. We’ll just have to see. But it is now undeniable that Trump’s foreign policy in the Middle East was a total disaster, and Giraldi will tell us why again.

One keeps hearing that former President Donald Trump will be judged well by the history books because he was the only American head of state in recent memory who did not start any new wars. Well, the claim is itself questionable as Jimmy Carter, for all his faults, managed to avoid entering into any new armed conflict, and Trump can hardly be described as a president who eschewed throwing his weight around, both literally and figuratively. He attacked Syria on two occasions based on fabricated intelligence, assassinated an Iranian general, withdrew from several arms and proliferation agreements, and has been waging economic warfare against Iran, Syria, Venezuela and Iraq. He has sanctioned individuals and organizations in both China and Russia and has declared Iranian government components and Yemeni Houthi rebels to be terrorists. He has occupied Syria’s oil producing region to “protect it from terrorists” and has generally exerted “maximum pressure” against his “enemies” in the Middle East.

So no, Donald Trump is no antiwar activist. But Trump’s most pervasive foreign policy initiatives have involved Israel, encouraging the Jewish state’s attacks on Palestinian, Iranian, Lebanese and Syrian targets with impunity, killing thousands of civilians on his watch. Trump has given Israel everything it could possibly ask for, with no consideration for what the U.S. interests might actually be. The only thing he did not do for the Jewish state was to attack and destroy Iran, and even there, reports suggest that he sought to do just that in the waning days of his administration but was talked out of it by his cabinet.

Trump’s pander to Israel started out with withdrawing from the nuclear monitoring agreement with Iran, followed by his shutting down the Palestinian offices in the United States, halting U.S. contributions for Palestinian humanitarian relief, moving the U.S. Embassy to Jerusalem, recognizing Israeli sovereignty over the Syrian Golan Heights, giving a green light for Israel to do whatever it wishes on the formerly Palestinian West Bank, and, finally permitting paroled former Israeli spy Jonathan Pollard to go “home” to Israel where he received a hero’s welcome. Trump, to be sure, was aided in his disloyalty to his own country by former bankruptcy lawyer Ambassador David Friedman in place in Israel, an ardent Zionist and a cheerleader for whatever atrocities Prime Minister Benjamin Netanyahu decided to commit. Couple that with a Congress that gives billions of dollars to Israel annually while bleating that the Jewish state has a “right to defend itself” and a media that self-censors all the human rights violations and war crimes that Netanyahu unleashes, and you have a perfect love fest for Israel expressed daily throughout the United States.

But even given all that, Trump the panderer clearly wanted to give one last gift to Israel, and he saved it for his last day in office, when he issued more than 140 pardons and commutations. Though other presidents have issued controversial pardons, no other head of state has so abused the clemency authority to benefit not only friends and acquaintances but also celebrity defendants including rappers, some advocated by the likes of the Kardashians, and also those promoted by monied interests. Most of the pardons went to cronies and to supplicants who were willing to pay in cash or in kind to be set free. It was suggested that Trump son-in-law Jared Kushner was engaged in the selection process and money was often a key element. Some might describe that as corruption.

Those of us in the actual antiwar plus anti-surveillance-state movement had been hoping that Trump would actually do something good at no cost to himself, pardoning whistleblowers Edward Snowden, John Kiriakou, Reality Winner, and Chelsea Manning as well as journalist Julian Assange. Kiriakou has reported that when he petitioned for a pardon through one of Trump lawyer Rudi Giuliani’s aides, he was told that such an arrangement would cost $2 million.

Bribes for pardons aside, it would have cost Trump nothing to pardon the whistleblowers and it would be a vindication of those who had put themselves at risk to attack the machinations of the Deep State, which Trump had blamed for the coordinated attacks against himself. This was his relatively cost-free chance to get revenge. Admittedly, there is speculation that Senator Mitch McConnell may have warned Trump against pardoning Julian Assange in particular, threatening to come up with enough GOP votes to convict him in his upcoming impeachment trial if he were to do so. Be that as it may, not a single whistleblower was pardoned though there was room on the ship for plenty of heinous white collar criminals. Former Dr. Salomon Melgen, for example, had his sentence commuted. Melgen, a close friend of the seriously corrupt Senator from New Jersey Robert Menendez got into trouble in 2009 when the Centers for Medicare and Medicaid Services (CMS) discovered that he had overbilled Medicare for $8.9 million for a drug called Lucentis. Two years later Melgen’s business was hit with a $11 million lien from the IRS and four years after that he was charged and convicted over more than 76 counts of health care fraud and making false statements.

Some of those pardoned had Jewish organizations going to bat for them. Elliott Broidy, former finance chair of the Republican National Committee, had no less than five Rabbis vouching for him. Last year Broidy had pleaded guilty to acting as an “unregistered foreign agent,” part of a larger investigation into the Malaysian “1MDB Scandal” in which Prime Minister Najib Razak stole more than $700 million dollars from his country’s state-run 1Malaysia Development Berhad (1MDB). Broidy worked on behalf of Razak and was offered $75 million if he could get the U.S. Justice Department to drop its own investigation into the scandal.

Another clemency beneficiary who exploited his Jewish links was Philip Esformes, a former nursing home executive who executed one of the biggest Medicare frauds in U.S. history. Just days after being released after serving four years of his 20-year sentence, Esformes celebrated his daughter’s wedding in a lavish party held at his multi-million dollar Florida home. He benefited from a lobbying campaign by the Hasidic Chabad-Lubavitch Aleph Institute, a group advised by the ubiquitous former Trump lawyer Alan Dershowitz. The movement reportedly has connections to Trump son-in-law Jared Kushner.

Another person pardoned by Trump was Sholam Weiss, a Hasidic businessman from New York who was sentenced to more than 800 years in prison in 2000 for racketeering, wire fraud and money laundering connected to a huge fraud scheme that stole $125 million from the National Heritage Life Insurance Company, leading to its bankruptcy. He fled the country but was subsequently arrested in Austria and extradited to the United States. Weiss had reportedly received the endorsement of from Dershowitz, who also recently has been involved in the Jeffrey Epstein/Ghislaine Maxwell espionage case.

And, of course, there was also the Israel factor. For no plausible reason whatsoever and contrary to actual American interests, Trump gave a full pardon to Aviem Sella, a seventy-five year old former Israeli Air Force officer, who was indicted in the U.S. in 1987 for espionage in relation to the Jonathan Pollard spy case. Sella fled to Israel days before Pollard was arrested outside the Israeli embassy in Washington D.C. and the Israeli government refused to extradite him. Sella, at the time doing a degree course at New York University, was Pollard’s initial contact. He had started working part-time for the Mossad intelligence agency in the early 1980s and received some of the classified top-secret documents provided by Pollard in exchange for money and jewelry.

Sella had passed on the Pollard contact to Mossad’s agent handler Rafi Eitan, who continued to “run” Pollard until he was arrested. Sella’s indictment was essentially meaningless theater, as is generally true of nearly all Israeli spy cases in the U.S., as Tel Aviv refused to extradite him to the United States and the Justice Department made no attempt to arrest him when he was traveling outside Israel. Trump’s pardon for Sella as a favor to Netanyahu sends yet another signal that Israel can spy against the U.S. with impunity. The request to Trump for clemency came from the Israeli government itself and was reportedly endorsed by Netanyahu, Israeli Ambassador to the United States Ron Dermer, the United States Ambassador to Israel David Friedman, and Miriam Adelson. According to the White House statement on the pardon, “The state of Israel has issued what a full and unequivocal apology, and has requested the pardon in order to close this unfortunate chapter in U.S.-Israel relations.”

Was it a gift or merely a pander? Note particularly the inclusion of David Friedman, who as U.S. Ambassador to Israel is supposed to defend the interests of the United States but never does so. Once upon a time it was considered a potential conflict of interest to send a Jewish Ambassador to Israel. Now it seems to be a requirement and the Ambassador is apparently supposed to be an advocate for Israel as part of his or her mission. Friedman will no doubt be replaced by a Democratic version to deliver more of the same. And then there is Miriam Adelson. Good old Sheldon is hardly cold on the ground and his wife has taken up the mantle of manipulating players in Washington on behalf of the Jewish state.

Money talks and so the drama in Washington continues to play out. Trump manages to make himself look even worse with his last round of pardons and commutations on his ultimate day in office. No one who deserved clemency got it and a lot of well-connected rogues who were willing to fork over money in exchange for mercy benefited. Business as usual delivered by the so-called Leader of the Free World.