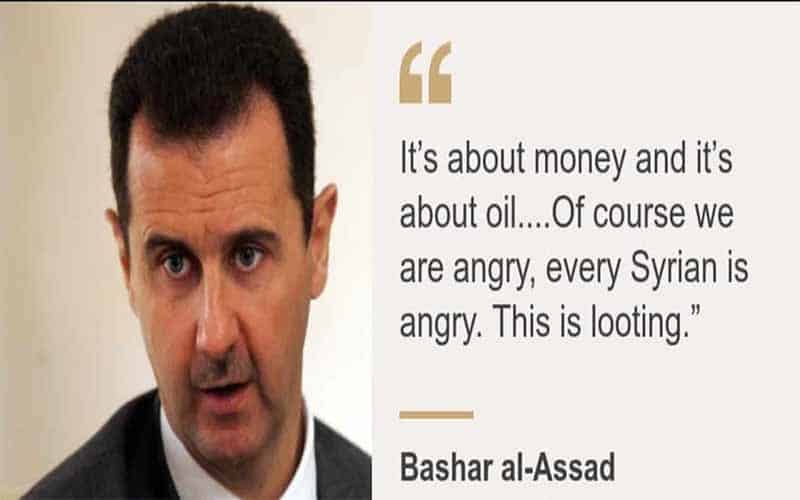 The US has doubled is occupation force inside Syria and begun building a new base, all just over a week.  More troops have moved into Syria than are, technically, stationed inside Iraq…where the government there demands their removal.

Syrians digging through trash in front of oil wells occupied by the US military on a network that actively campaigned along with its state parent for the dissolution of the Syrian state https://t.co/UPIsMCRX3g

These troops arrive but they can’t come from Iraq, Iraq would be empty and they aren’t coming from Europe or the US.  Is this, just maybe, Trump’s “Space Force?”

Stealing oil, is that what the “Space Force” was meant to do?  Of course!

VT: The ongoing story, Biden is no better, but that we knew, continuing the US deep-state policy: US occupation forces have sent weapons and logistic materials to Koniko oilfield, northeast of Deir Ezzor, with the aim of reinforcing its military base in that region.

Stealing the oil, looting the country.. a few weeks ago, the US occupation forces increased their reinforcements to all of their bases in the Syrian al-Jazeera region in parallel with reports on starting the establishment of a new base for them in the Yarubiya area in Hasaka eastern countryside.

A sudden rise in ISIS attacks in Iraq/Syria comes after Biden's inauguration pic.twitter.com/jEqyxUq2Jv

The US occupation continuously brings military and logistic reinforcements to the areas it occupies to reinforce its bases, as it deliberately and in collusion with the QSD militia has turned many oilfields, governmental facilities, schools and clinics in the Syrian al-Jazeera region into military bases. and from MidEast Discourse: 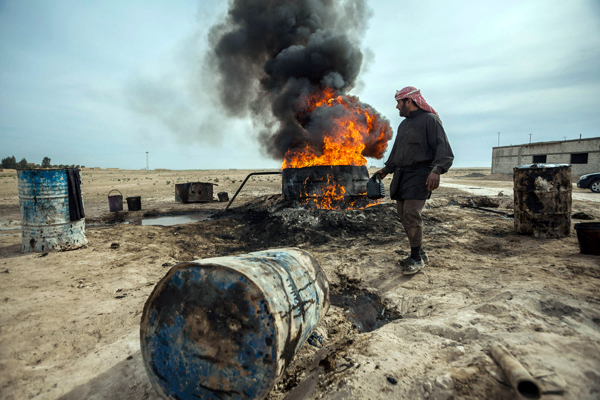 “YPG is a sub-affiliate of the Kurdistan’s Working Party (PKK), which is designated by the United States government as a Foreign Terrorist Organization”, according to the US justice department.

🇺🇸🇸🇾🇮🇶 Terrible as Trump was for both countries, neither can expect much better with Biden at the helm
✒️ @abdelbariatwan #Syria #Iraqhttps://t.co/353TxRADWK

Federal law enforcement agents arrested Daniel Baker of Tallahassee, Florida.  He had specifically called for others to join him in encircling any protestors and confining them at the Florida Capitol complex on January 15 using firearms.

Baker, a former US Army Airborne infantryman received an other-than-honorable discharge in 2007 after he went AWOL before his unit was to deploy to Iraq. In 2017, he joined the People’s Protection Units (YPG), a Kurdish group fighting in Syria against ISIS and the Turkish government.

He claimed on social media that he was a trained sniper for the YPG, who is a sub-affiliate of the Kurdistan’s Working Party (PKK), which is designated by the US as a Foreign Terrorist Organization.

The question is: how will the Biden administration explain continuing support of a Foreign Terrorist Organization, even though it was inherited from the Trump administration.

On January 18, Russian Foreign Minister Sergey Lavrov said Russia will not “chase” the US military out from Syria or engage in hostilities, but it does engage in a dialogue with Washington, trying to ensure compliance with certain rules, while he noted that Russia is adamant about the unacceptability “of the use of force against the objects that belong to the Syrian state.”

UN Security Council Resolution 2254, adopted unanimously, demands to respect the sovereignty, territorial integrity, and political independence of the Syrian Arab Republic. “What the US does in Syria is, of course, a blatant violation of this resolution,” the minister said, referring to the plundering of the nation’s oil resources.

“Washington’s line on blocking shipments of humanitarian aid to the Syrian Arab Republic via all possible means of blackmail and ultimatums, is a violation of this resolution, as well,” the Foreign minister noted.

While forbidding everyone from sending humanitarian aid to Syria, the US itself has “occupied significant territories on the east bank of Euphrates, and exploit mercilessly the Syrian hydrocarbons, Syrian national wealth, the rob it, sell it, and using the money gained, they fund their viceroys, including the Kurdish separatists, persuading the Kurds not to engage in a dialogue with Damascus, and promoting separatist ideas.” Lavrov further reminded all that nobody invited the Americans into Syria.

On January 18, the latest negotiations between the Kurds of North East Syria and Damascus have reached an impasse. Sponsored by Russia, the negotiations were initiated in response to the military operation launched by the Turkish-backed terrorists in December to control Ain Issa, the de facto political capital of the Kurds.

The central government of Damascus and its forces represent an option for the Kurds in the event of any Turkish threat. During the “Peace Spring” military operation, launched by Turkey in October 2019, the Kurds resorted to Russian and Syrian forces to protect them, and repel the invasion.

The Kurds attempt to hold their political capital at Ain Issa. They have an option to coordinate with Russian forces to take control of Ain Issa, which would lead to the return of the city to Damascus control, and Turkey would accept that, as long as the SDF, YPG, and all the Kurdish separatist institutions were removed.

Syrian permanent representative to the United Nations Bashar al-Jaafari sent the first message to the Biden administration, newly in office. During a virtual session of the UN Security Council, Jaafari called for an immediate change in Washington’s foreign policy in Syria.

“The new US administration must stop acts of aggression and occupation, plundering the wealth of my country, withdraw its occupying forces from it, and stop supporting separatist militias, illegal entities, and attempts to threaten Syria’s sovereignty, unity and territorial integrity,” Jaafari said.

The American troops have been tasked with maintaining control over oil and gas sites, where the Trump administration sought to bring in US energy companies. The US and partnered SDF, and YPG militias, operate without permission from the Syrian government, which is backed by Russia and Iran.

Russian efforts to reconcile between the Kurdish militias and the central government in Damascus have repeatedly collapsed despite their common desire to end the war and expel a Turkish invasion headed by Radical Islamic terrorists.

“Companies like Exxon and Chevron don’t do this kind of thing,” said James Cain, one of the three founders of the US oil company, Delta Crescent Energy. “It’s too pioneering; too adventuresome; some might say too risky,” said James Cain, the former US ambassador to Denmark. His US company wants to explore, refine and export oil from North-East Syria.

The Kurds are willing to do business with the American company, which has a rare US sanctions waiver allowing it to engage in the Syrian oil trade, obtained under the Trump administration.

The region remains at risk of attack from either Turkey or IS, and is under occupation by 900 US soldiers. The oilfields are Syrian owned resources, and the Kurds, SDF, and YPG do not have legal title to the oil, which has current output estimated at just 30,000 barrels a day.

The Kurds do not allow either the Russians or the Damascus administration direct access to the fields.

Former US President Donald Trump threatened twice to pull American soldiers out of the north-east, but reversed his decision after a backlash in Washington and has previously said troops are still there “only for the oil”, which is currently processed in thousands of hazardous makeshift refineries. Sold cut-price on the black market, it earned up to $3m a day in revenues for the SDF before the 2020s oil price crash.

President Joe Biden, and his Secretary of State Anthony Blinken, will have to ponder a new strategy on Syria.  Biden has portrayed himself as morally superior to Donald Trump.  Will Biden order the US troops to stop plundering the oil in Syria, and to disengage with a militia that has ties to the PKK, who are responsible for over 30,000 deaths from terrorist acts in Turkey spanning decades?