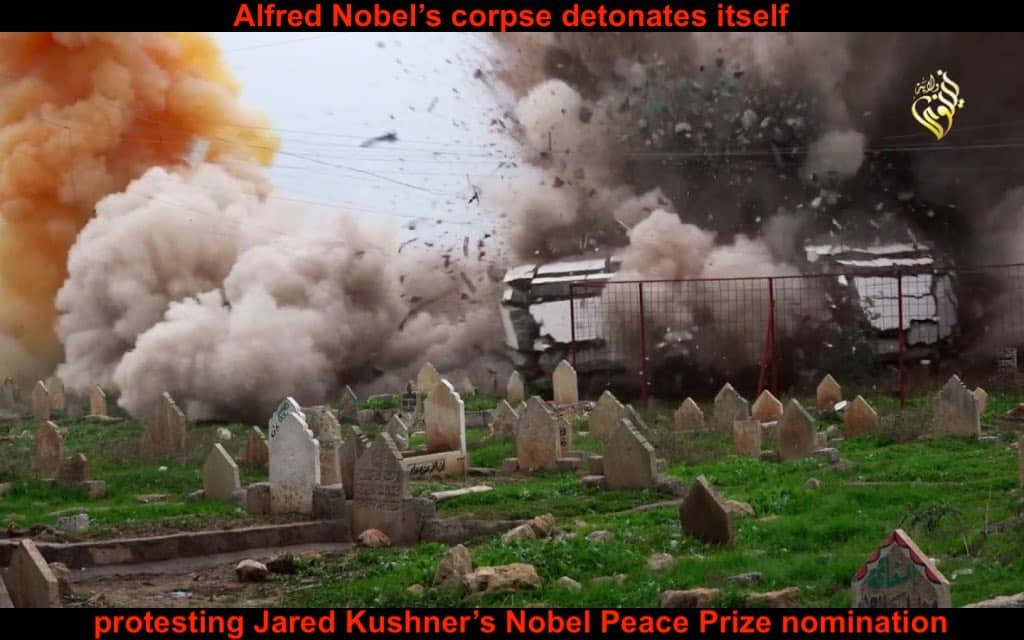 Nominated by Jeff Epstein’s attorney…Dershowitz who wore his underwear, he tells us, when upstairs alone with a teenage girl at Epstein’s New York rape brothel…getting a massage.

Residents of Norra Begravningsplatsen, Solna, Sweden were awakened this morning to a tremendous explosion. Many assumed there had been an accident with a gas main, while others feared a terrorist attack.

The latter group’s apprehensions proved well-founded. The explosion, which destroyed much of the Norra Begravningsplatsen cemetery, turned out to be the world’s first posthumous suicide bombing: Alfred Nobel’s corpse had protested Jared Kushner’s nomination for the Nobel Peace Prize by rolling over in its grave and blowing itself to bits.

Titti Skitqvisst, president of the Nobel Endowment and great-grand-niece of the celebrated inventor, explained: “When my ancestors buried Alfred alongside a few hundred tons of his greatest invention, dynamite, we had no idea that his corpse might one day figure out a way to detonate it—or even have any reason to. Who could have imagined that a genocidal Zionist scumbag like that Kosher Nostra slumlord Kushner would ever be nominated for a prize named after my great-grand-uncle?”

A Kushner Crime Family spokesperson responded: “If mass murderers like Barack Obama and genocide perpetrators like Shimon Peres and Aung San Suu Kyi can actually win the Nobel Peace Prize, there is no reason why a mobbed-up moron who has screwed up the Middle East worse than it already was in service to Zionist genocide shouldn’t at least get a  nomination. We applaud the nominators, and deplore the terrorist—who, by the way, should never be referred to as a suicide bomber, since he was already dead, but instead should be called a corpse-icide bomber. There, that will show him!”

The myriad scorched and scattered shards of bone and bits of rotten flesh constituting Alfred Nobel could not be reached for comment.