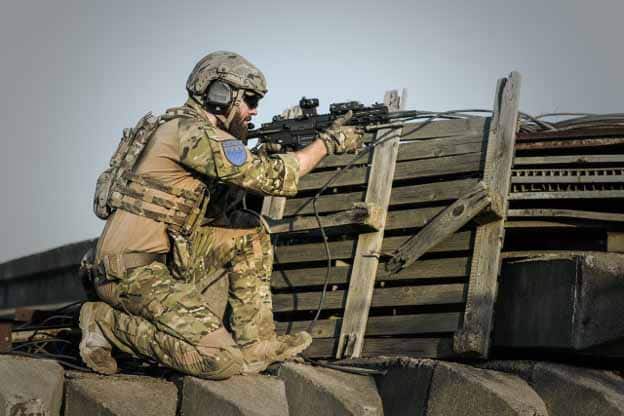 By Janice Kortkamp for VT Damascus

Moscow / Head of the State Sovereignty Defence Committee at the the federation Council of Russia Senator Andrei Klimov reported crimes of the US occupying forces in the Syrian Jazira, saying that the US presence on the Syrian territories are illegal and contrary to international laws and standards.

In a press conference held today in Moscow via video conferencing, Klimov said, that the Syrian people have the right to protect their interests and decide their own fate.

He also stressed that the Commission which he is chairing is working to organize a round table with international participation, which will be devoted to examining the conclusion of an international treaty banning attempts at interference in the affairs of countries sovereigns, and on the commitment to the implementation of the UN charter.

The “Kurdish Struggle for Independence in Syria” is a US propaganda campaign to hide the intended Balkanization of the country.

This is my humble attempt to explain this complex issue.

VT Damascus: For the past two weeks, American sponsored “Syrian Democratic Forces” (SDF) – the Kurdish separatists and other fighters paid handsomely by the US (ten times what Syrian soldiers make) for their mercenary services – have besieged the parts of the northeastern cities of Al-Hasakah and Qamishli still under control of the Syrian government.

#Raqqa: A tour in the city of Raqqa showing the recently completed lighting projects in the city center pic.twitter.com/tcSyAx3Hc0

Civilians have been demonstrating against the SDF occupation and siege which the SDF is brutally responding to. The US-created SDF killed one protestor and wounded several more the day before yesterday.

Earlier today the governor of the province announced that Russia has made successful negotiations and a partial lifting of the siege has begun in neighborhoods of Qamishli.

#Aleppo: This morning, a Russian and government delegation visited the security barriers surrounding the neighborhoods of Sheikh Maqsoud and Ashrafieh, which is controlled by the People's Protection Units (#YPG), and have been under siege since a month. https://t.co/qSfPyBtTBq pic.twitter.com/atWK4tdH83

Many other Syrian civilians in those areas have been protesting against America’s troops and mercenaries in the province as they’ve been: kidnapping men to fight for them – “press gang” tactics; burning crops or sending the wheat and other produce outside Syria; stealing the oil (alongside US forces) from the rich oil fields there (the US is using the profits to fund the ongoing training and equipping of the SDF); on occasion driving out ethnic and religious minorities from their homes in an effort to create a Kurdish majority population; and often working with ISIS militias instead of fighting them.

#Tel_Tamr: ANHA: The Turkish occupation army and its mercenaries of terrorists set fire to a number of houses in the village of Al-Qasimia, northwest of Tal Tamr district, this evening. pic.twitter.com/2tnHbRep2g

US forces never left Syria under Donald Trump – they are there without any declaration of war by Congress or a UN mandate – and Joe Biden has already added to their numbers. The Syrian government, like the Iraqi government, has demanded many times that American forces vacate their country. Instead of leaving, the US troops remain stealing oil – the country’s richest oil fields are in the area occupied by the US – and the area is also Syria’s breadbasket. The resulting severe shortages of food and fuel have brought terrible suffering for the Syrian people.

The lies and propaganda:

1. “Kurdish areas” – The northeast third of Syria illegally occupied by US troops is not “Kurdish”, in fact Kurds do not make up the majority of the population in those areas at all – Arab tribes do and there are hundreds of thousands of Assyrian Christians as well as some Armenians. There were few Kurds there until massive relocations in the past 100 years from Turkey. For example in the capitol city of the Al-Hasakah province, also called Al-Hasakah, a French census in 1939 listed only 360 Kurds with 7133 Arabs, 5700 Assyrians and 500 Armenians. (1) The majority of Kurds are Sunni Muslims but there are some who belong to different sects. According to a 2012 comprehensive study by the National Association of Arab Youth of villages in Al-Hasakah province there were 1161 Arab villages, 453 Kurdish, and 98 Assyrian. (2) The Kurdish population of Syria overall is only 5-10%. In Syria, a country whose roots as a geopolitical entity go back to the dawn of civilization, a hundred years ago is yesterday.

2. “The Kurds” are not a unified collective; there are numerous groups with differing alliances and objectives – a dizzying alphabet soup of acronyms but the group backed by the US in Syria is the former YPG (People’s Protection Units). In 2017 US Army General Raymond Thomas, the head of Special Operations Command, told the leaders of the YPG they had to “change their brand” before the creation of the “Syrian Democratic Forces” – the US armed, funded and trained mercenary army. He chuckled when he announced the new brand name, saying it was, “a stroke of brilliance to put democracy in there somewhere. But it gave them a little bit of credibility.” (3 & 4)

3. When US efforts to undermine and overthrow the Syrian government failed, Secretary of State John Kerry announced “Plan B” – the partitioning of Syria – a “Balkanization” of the country (similar to plans by France during the French Mandate years). This plan would divide the country along sectarian and ethnic lines to create smaller, weaker states. (5) This kind of subdivision – the ages old “divide and conquer” strategy, would never work in Syria – unless the intention was to create more and more conflicts.

The Syrian population is mixed around the country in the large city centers, smaller towns, and tens of thousands of villages; while neighborhoods or villages and even some larger areas may be predominately one ethnicity or religious sect, the notion of any one group having their own autonomy is antithetical to the culture. The over two dozen people and religious groups making up the Syrian people are integrated and share Syria. One example is the Armenians who also came en masse a hundred years ago escaping the Armenian genocide by the Ottoman Turks – the same genocide that many Kurdish groups assisted the Turks in perpetrating. The Armenians fully integrated into Syrian society yet retain their own traditions, language and Christian religion.

To put this in terms Americans can relate to, what would be the reaction of Americans if Russia or China had built bases in Orlando, were training and arming militias of Floridians who came from Cuba, and were demanding Florida be turned into “Cuba-stan”?

4. Israel has been courting Kurd separatist groups for decades (6) and the splitting up of Syria is primarily on behalf of Israeli ambitions to take control over Lebanon – in addition to taking all of Palestine and to finalize and legitimize their theft of Syria’s Golan. In order achieve those goals, they want Hezbollah crushed in Lebanon and the independent countries of the northern arc of the Middle East– Syria, Iraq and Iran –to be taken out of the way (because they are not under complete submission to the US which acts as Israel’s foreign bodyguard and military).

A Resistance Arc of those three large countries with strong armies operating in a unified alliance would be the greatest bulwark against Israel expansionism. It is critical to understand that Israel is not “defending itself” – Israel’s intentions are that no country be allowed to have the ability to defend themselves against Israeli aggression.

The US/Western propaganda to promote the Kurdish separatists has been totally misleading – just as it has been regarding the entire Syrian conflict for 10 years. While many Kurds fought bravely against ISIS and al Qaeda in northern and north eastern Syria, those battles do not compare with the valiant fight by the Syrian Arab Army and its allies against the hundreds of thousands of terrorists and extremist proxies (most of which came from outside Syria) who have been rampaging through their country since 2011.

The US is using the Kurd separatists’ cause as a front – a cover story – for a mercenary army created to perform an illegal Balkanization of Syria, a country which has never been aggressive against America nor a threat in any way. Without the illegal US coalition, the Kurdish and any other fighters who’ve joined the SDF would have to re-integrate with Syria and continue the fight against ISIS, al Qaeda, Turkey’s illegal occupying forces, and other terrorist proxies, alongside the Syrian Arab Army and its allies where they belong.
_______________________________________

(3) Reuters, U.S. general told Syria’s YPG: ‘You have got to change your brand’, July 21, 2017. https://www.reuters.com/article/us-mideast-crisis-usa-ypg/u-s-general-told-syrias-ypg-you-have-got-to-change-your-brand-idUSKBN1A62SS

(5) The Guardian, John Kerry says partition of Syria could be part of ‘plan B’ if peace talks fail, February 23, 2016. https://www.theguardian.com/world/2016/feb/23/john-kerry-partition-syria-peace-talks

(6) Haaretz, Inside the Unlikely, Unofficial Ties Between Israel and the Kurds, October 12, 2019. https://www.haaretz.com/middle-east-news/syria/.premium.MAGAZINE-israel-and-the-kurds-an-unlikely-and-unofficial-relationship-1.8234659