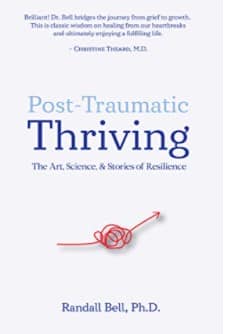 Post-Traumatic Thriving: The Art, Science, & Stories of Resilience
Publisher: Core IQ Press
Release Date: January 1, 2021
ISBN 978-0-9967931-7-9
Available from Amazon.com and all bookstores
Post-Traumatic Thriving
When trauma hits, our most significant decision is to dive, survive, or thrive. and choosing to thrive is a skill that can be cultivated with the right tools. in his new book, Post-Traumatic Thriving: The Art, Science, and Stories of Resilience, Dr. Randall Bell shares a clear, practical course for healing by expertly weaving science and research with stories of real people who refuse to be defined by their trauma.
In this book Dr. Bell lays out his academic research and speaks freely about his trauma of being born with a congenital heart defect. Diagnosed with PTSD, he utilized these principles to heal from his childhood trauma and summit Africa’s Mt. Kilimanjaro at the age of 60.
Los Angeles, CA, January 14, 2021 — Is there a science to survival, or are some people simply born with elastic emotional exoskeletons that bounce back readily following even the most traumatic of experiences?
To uncover the answer, world-renown expert on disasters and trauma Dr. Randall Bell undertook unprecedented research, juxtaposing outcomes of scientific studies with stories of real people who have not just survived, but have used their trauma as their fuel to thrive to uncover common denominators. He shares his remarkable insights in his new book, Post-Traumatic Thriving: The Art, Science, & Stories of Resilience.
Dr. Bell sits down with survivors of the Holocaust; murder-victim’s families; crime victims; suicide survivors; and those who’ve experienced homelessness, disasters, addictions, depression, death, divorce, disabilities, defeats and disease to explore the rare mindset of the post-traumatic thriver.
He shares with readers stories of remarkable resilience, including the following:
• A deaf man with a glass eye invented the electric guitar and became a household name, remarkably wealthy and most importantly, happy.
• A convicted murderer took responsibility for the damage he caused, graduated with honors from college, became a minister and turned around the hearts of the most hardened criminals.
• A girl born with cerebral palsy landed the world’s first starring role on national television and spoke at the White House three times.
• A woman hid in a basement for years and lost her entire family in the Holocaust. She eventually found true love and paints stunning artwork.
• The sister of a murder victim helped millions of women in toxic domestic relationships.
• A woman’s car crash resulted in an addiction to prescription drugs, a divorce, a loss of her children and a cot in a homeless shelter. She has rebuilt it all back and more.
• A man set to go to the Olympics had his hopes dashed by Jimmy Carter and went on to build a worldwide business empire.
Ultimately, Dr. Bell documents the science of happiness, as well as the individual styles and common thread that all post-traumatic thrivers have to emerge with a fulfilling life. When trauma hits, your most significant decision will be to dive, survive or thrive. If you choose to thrive, this book is for you.
As an economist, Dr. Randall Bell has consulted on more disasters on earth than anyone in history and is widely considered the world’s top authority in the field of post-traumatic thriving. His clients include the Federal Government, State Governments, International Tribunals, major corporations and homeowners. Dr. Bell believes that “the problem is not the problem — the problem is how we react to the problem.”
Often called the “Master of Disaster,” Dr. Bell is squarely focused on authentic recovery and resilience. His research has been profiled on major television shows and featured in numerous magazines and the international media. More information can be found at www.posttraumaticthriving.com.
About the author: Randall Bell is a sociologist and economist who specializes in disaster recovery projects.  He has been consulted for the tragedies of the World Trade Center, Flight 93, Sandy Hook, BP Oil Spill, Hurricane Katrina and Bikini Atoll Nuclear Test Sites, the Northridge earthquakes, OJ Simpson, Jon Benet Ramsey, Heaven’s Gate, and hundreds of other cases. He has been retained by the Federal Governments of the U.S., Canada, and Australia to help to solve numerous crises. Bell has done much more.