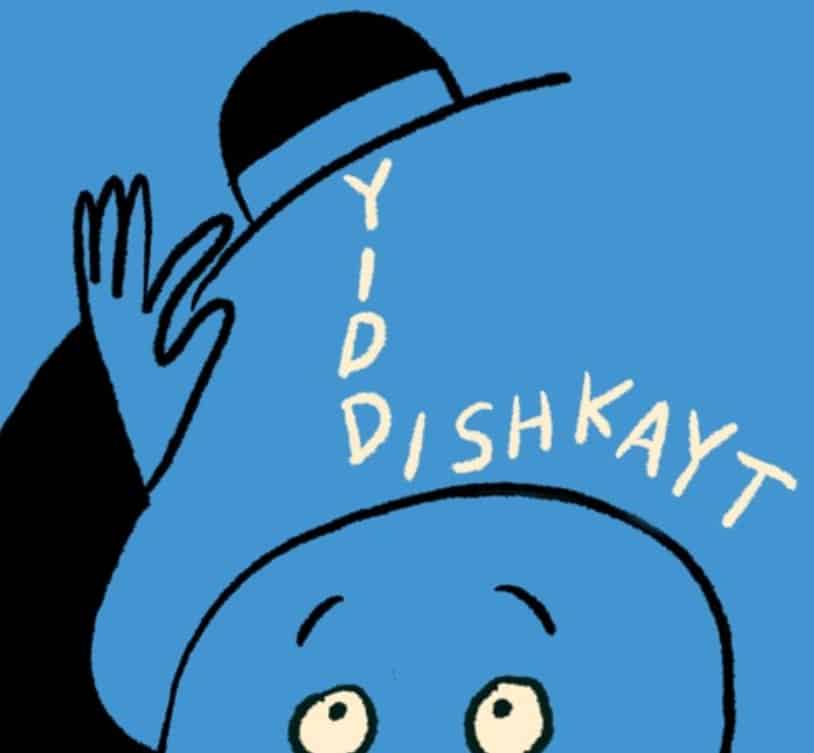 YIDDISHKAYT INITIATIVE (“YI LOVE JEWISH”) SERVING UP THE WHOLE MEGILLAH WITH THE INTERNATIONAL VIRTUAL YI LOVE YIDDISHFEST – PURIM EDITION
Stay In Your House, Click Your Mouse… Virtual Festival Will Have It All, Including Dr. Seuss in Yiddish, from February 25-28, 2021

SOUTH FLORIDA – The holiday of Purim has often been called “the Jewish Carnavale,” with the joys of song, laughter and drama folded into one, like tangy, fruit-filled hamantashen. That’s just the recipe for a Yiddishe Taam that the Yiddishkayt Initiative (“YI Love Jewish”) will be serving up at its first annual International VIRTUAL YI Love Yiddishfest – Purim Edition, scheduled on-line from February 25-28.

Virtual visitors of all ages will be able to step right up for a wide range of FREE performances, concerts, readings and interviews featuring major award-winning American and International  entertainers as celebrants worldwide recount the saving of the Jews from a threatened massacre during the Persian Empire in the Fifth Century BC.  The celebration continues with the YI Love YiddishFest 2020 – Purim Edition, which will be simultaneously streamed on the yilovejewish.org website, Facebook Live and YouTube Live.

“We’re not able to spread the joy and traditions of Purim and Yiddishkayt in person, so we’re creating an on-line experience that will give everyone around the world a much-needed escape from the realities of the moment, for four days of frolic, festivity and frothy fun,” said Avi Hoffman, Founder and CEO of YI Love Jewish.

Here are some of the highlights:

From the team that brought you the Broadway celebration in our Hanukkah Festival we present an evening of Megillah Chanting, Vashti Ranting and Cantor Ginsburg ‘Canting’ great musical theatre classics with a bissel shpiel thrown in. Join us and get your Shushan-on!

Shira Ginsburg is an ordained Cantor celebrating her 14th year of service at East End Temple in Manhattan. As a Messinger Scholar, Shira earned her Masters, Cantorial degrees and ordination from Hebrew Union College – Jewish Institute of Religion. Shira is the recipient of the 2019 Lev Aryeh, Heart of a Lion Award from the Jewish Partisans Educational Foundation, Women of Reform Judaism Award, Cantorial Alumni Association Prize, and Sylvia Davidson Memorial Award for extraordinary diligence in mastering Chazzanut. Also a professional actress, singer, and songwriter, Shira premiered her one-woman musical, Bubby’s Kitchen Off-Broadway in spring of 2016 to rave reviews and has toured the country extensively over the last six years bringing the production to over 25 communities.

Caryl Fantel is a Carbonell and two-time Silver Palm Award-winning music director, piano accompanist and vocal coach with more than 30 years of experience working at theatres and concert halls around the U.S. Career highlights include preparing Parkland’s Marjorie Stoneman Douglas High School students for their inspiring performance on the 2018 Tony Awards at Radio City Music Hall; having her youth vocal group Fantel Music Futuro Voices perform with Hugh Jackman on his 2019 world tour; working as Music Director to develop the musical Theda Bara and the Frontier Rabbi for its Off-Broadway run; and accompanying the American Heritage Featured Choir at Carnegie Hall.

Roy Fantel’s career as a drummer/percussionist began in New York and spans more than 30 years, including recording, touring, performing on cruise ships and live TV and radio broadcasts. Highlights include working on Broadway with Joan Rivers in Sally Marr and Her Escorts; developing and playing the drum score for the Off-Broadway show Theda Bara & the Frontier Rabbi; backing artists including the Tokens, the Coasters, John Davidson, Leslie Uggams, Kellye Cash, Tiny Tim, Lee Roy Reams, Mike Burstyn, Avi Hoffman, Lorenzo Lamas, Avery Sommers, John Lamb, and Johnny Contardo; performing as a percussionist with the Berkshire Symphony Orchestra and as rehearsal drummer with Aretha Franklin’s band at the Saratoga Jazz Festival.

Shmoozing with Avi, our interview program, will feature Phillip Namanworth whose music career has been highlighted by his funky signature vocals, bluesy piano playing and his world class band, Always Somethin’, backing him up. Phillip has intertwined 25 years of studies and teaching of Jewish mysticism and Chassidus as a long time Talmud of R. Simon Jacobson student, imbuing the wisdom of the sages with the rockin’ rhythm and blues of the soul, bringing the material and the spiritual worlds together in a fusion of spirit and song.

Phillip began his music career singing with an a capella doo wop group, The Rondells, whose lead singer was Chuck Negron, later of Three Dog Night. He has recorded and toured with Dave Von Ronk (Dave Van Ronk and the Hudson Dusters) Joseph Byrd (The American Metaphysical Circus), Elliott Randall (Rock and Roll City), Roberta Flack, Ry Cooder, and Kenny Vance among many others. Phillip was the piano player for the original Broadway productions of Superstar and The Rocky Horror Show. He has recorded four CDs and has composed numerous musical numbers.

Singing Sensation Aelita in Concert with “Songs from the Heart” – February 26, 4 p.m.

Aelita, is a world-renowned recording star. Called by the international press “chanteuse extraordinaire,” “masterful artist,” and “skillful entertainer,” she began singing at the age of five and began her professional stage life at 15! Aelita is an international singing star and recording artist with 8 albums who has graced stages around the world singing in 16 languages. Aelita is recognized among the “100 golden voices of History” by EuroNews.  Born in Riga, Latvia, she remains true to her roots and takes us on a family journey spanning three continents, intertwining timeless Yiddish songs, American pop “a la Yiddish” and Broadway favorites. The preservation of Yiddish music is a lifelong quest for Aelita who truly sings from the heart.

Engel stars in Gimpel Tam (Gimpel the Fool), performed for The Nephesh Theatre of Israel. The production is based on a story by Isaac Bashevis Singer, adapted and directed by Howard Rypp. The Nephesh Theatre, founded in 1978 by Howard Rypp as artistic director and Gabriel Emanuel, has staged more than 100 productions in Hebrew and English. The productions reflect a plurality of beliefs, depicting different communities within Israeli society that must develop a common language and achieve mutual respect.

Efim Chorny and Susan Ghergus headline the Chorny-Ghergus Duo, one of the most renowned groups in Yiddish music in Europe and beyond. They are laureates of the prestigious Moscow International Solomon Mikhoels’ Art Festival (1st Prize). They have been teaching faculty in many festivals of Yiddish music. Chorny & Ghergus created the background music for a production of “God of Vengeance” (by S. Asch), that was performed during the International Festival “A. Goldfaden” (France-Romania-Lithuania-Hungary). They’ve also participated in “Yiddish Vocalists,” “Musical Culture of the Jewish People of Eastern Europe” (Austin University, USA) and the animated film project “Lullabies of the World” (the Jewish Lullaby). They represented Moldova in the cultural program of the Moscow International Jewish Book Festival. Efim Chorny and Susan Ghergus are leaders of the “Theatre of Jewish Song” (Moldova) and soloists of international bands “Klezmer Alliance,” “Besarabish” and the “Pro-Yiddish Project.”

Stories by the iconic authors Rudyard Kipling and Dr. Seuss are given surprising new spins in Yiddish (with a Bisl English) translations by Avi’s Yiddishe Mameh, Columbia University Professor Miriam Hoffman read by her son, renowned actor Avi Hoffman. This multimedia presentation will include music and illustrations from the original publications. The Yiddish interpretations of these timeless classics will put a shmeykhel (smile) on the faces of children of all ages.

The Megillah Cycle is a reading of the entire original Megillah of Itzik Manger, which was the inspiration for the 1960’s Broadway Musical sensation which starred a young Mike Burstyn and his parents, the Yiddish Theatre icons Peysakh Burstein and Lilian Lux. This virtual celebration will be directed by, and will feature Mike Burstyn and an international celebrity studded cast including Daniel Kahn (Germany), Jamie Elman and Eli Battalion (Yidlife Crisis, Canada), Eleanor Reissa, Shane Baker, Yelena Shmuelnson, Allen Lewis Rickman, Suzanne Toren and Avi Hoffman as Evil Haman. The International VIRTUAL YI Love Yiddishfest 2021 – Purim Edition will allow participants from all around the world to sign on to their computers, tablets and phones to enjoy four days of FREE outstanding Jewish cultural events with primarily English and a ‘BISL’  Yiddish language content, streaming live on multiple platforms.

ABOUT THE YIDDISHKAYT INITIATIVE Yiddishkayt Initiative (YI), a 501(c) 3 not-for-profit organization that celebrates and promotes Jewish history, life, and culture, and their positive and far-reaching impact on the world. From performing arts, publishing, and education to language, philosophy and literature, YI offers a global clearinghouse of Jewish culture and entertainment staffed by experts in subject matter and production. The organization works with a wide range of organizations, including Federations, JCCs, synagogues, Hadassah chapters, Hillel chapters, men’s groups, women’s guilds, special interest clubs, youth groups, summer camp programs, and educational institutions, including the University of Miami’s Sue and Leonard Miller Center for Contemporary Judaic Studies.