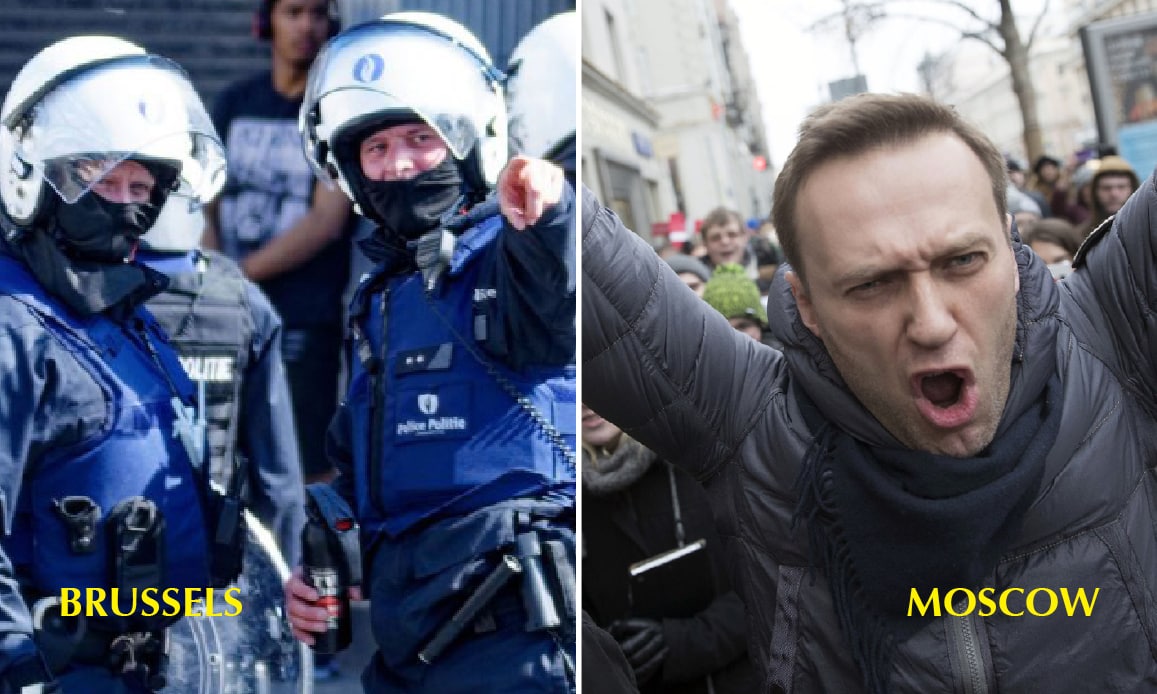 “Alexei Navalny was sentenced to 3 years and 5 months in prison by a judge from the Simonovsky District Court, who met for the occasion at the Moscow City Court. Dozhd reported it. The request from the Federal Penitentiary Service to convert the suspended sentence into real detention was accepted, due to Navalny’s alleged violation of the terms of probation. However, the judge decided to take into consideration the year of home detention already served for the Yves Rocher case and therefore reduced the detention in prison from 3 years and 5 months to 2 years and 5 months of penal colony “.

This is what the queen of the Italian mainstream, or the ANSA agency, reports, citing the Rocher case but “surreptitiously” omitting to remember that the case concerns a colossal embezzlement that makes him a “criminal” and therefore a convicted, well aware of having violated the obligations of his conditional suspension of his sentence.

But for him the mainstream media are ready to sing in chorus the song of the anti-Putin globalists, they are willing to take a stand for the right of opinion and demonstration that disappears from their hypocritical ethics when it comes to narrating the approximately 500 arrests made in Brussels in recent days against those who protested against an increasingly absurd lockdown, long contested by leading medical experts as reported in previous articles.

Both the supporters of Navalny and those against the lockdown in Europe have violated the law by organizing unauthorized demonstrations: but the judgment of the Western media is variable and interprets the law and compliance with the law at will depending on whether you are in Brussels, the capital EU, or in Moscow.

“Alexei Navalny, one of the leaders of the Russian opposition, is guilty of embezzling timber – worth $ 500,000 – against Kirovles, a Kirov company. With the sentence of five years of imprisonment, the confirmation has arrived: there is, as requested by the prosecution, the suspension of the sentence, but the sentence is enough to hit the target: Navalny will not be in a position to run for the presidential elections of the next year. In December he announced his intention to challenge Vladimir Putin, with a platform in which he talks about development, equity, the fight against corruption. The Kremlin, in spite of the polls that are more than favorable to Putin, must have considered the confrontation too dangerous” Il Sole24Ore wrote on February 8, 2017.

Recently, however, Russia Today reported the revelations from Moscow that Navalny is a collaborator of the American counterintelligence of the CIA, Central Intelligence Agency, as evidenced in a previous article of ours.

Prejudice dwells in the mind even more than in the conscience. Otherwise the same mainstream media that today are tearing up their clothes would have had to ponder a little better the smear campaign against Silvio Berlusconi, convicted of a nebulous affair concerning the sentence for tax fraud to four years in prison, of which 3 condoned for the pardon, over a controversial issue over inflated television rights to the tune of $ 368 million. Less than Navalny would have misappropriated.

But the media and political mainstream threw fuel on the fire of the “Berlusconi case” so much so that he was forced to resign before the impending sentence, being expelled from the Senate of the Republic, receiving a ban on public office and finally exposed to the public mockery of the assignment to social services. to avoid jail. The king of Arcore, certainly less reckless and motivated (by foreign financial powers) than Navalny, accepted everything.

Until a few months ago the revelations of a now deceased judge cast no shadows on the sentence itself. «It was” a grave injustice “, perpetrated by an authentic “firing squad” and imposed because “Berlusconi must be condemned a priori”. Words spoken by Amedeo Franco, a magistrate who was the supervisor of that trial in the Supreme Court »wrote the newspaper Il Tempo.

At the news, the center-right politicians and newspapers gave a little jolt. Not enough to cause a shock to the Superior Council of the Judiciary (CSM) which was overwhelmed by the PalamaraGate scandal, for which the former prosecutor Luca Palamara was disbarred from the judiciary but now launches explosive accusations against the CSM itself.

Has anyone called into question or questioned the political honesty of the president of the Superior Council of the Judiciary which is, by right, the President of the Republic Sergio Mattarella, a former deputy of the same Democratic Party that has managed the appointments in the strategic prosecutors in the last decade?

I am certainly not here to acquit Berlusconi, whom I consider to be among the primary responsible for the destruction of Italy along with Giovanni Agnelli and Carlo De Benedetti. But reflection is inevitable.

If a rational person free of prejudices were to evaluate the cases of Berlusconi and Navalny he would inevitably find more rotten in Italy, and in the European Union which was not indignant at such events, rather than in that of Navalny, victim of an alleged poisoning which only people with little experience in attacks can believe, as demonstrated in a previous report.

BRUSSELS CAN ARREST THE MANIFESTANTS, MOSCOW NO!

But let’s close the political parenthesis and open the social one. We always refer to ANSA for convenience of summary. Here is the punctual attack on the alleged “regime” of Russian President Vladimir Putin that unveils through the police operations against the demonstrators who in various cities of Russia protested against the arrest of Navalny on his return home (aware of having violated the restrictions on conditional sentence).

«At least 311 people have been arrested so far in Russia for taking part in demonstrations in support of Putin’s number one opponent, Alexey Navalny, on trial in Moscow. This was reported by the NGO Ovd-Info, which has news of 307 people arrested in Moscow, where there were demonstrations in front of the court where the dissident’s trial is underway, and four in Inzhevsk» writes the Italian news agency, updating then the number of those stopped.

«The number of stops at yesterday’s demonstrations continues to rise and has broken through 5,400, a real record. In the meantime, criminal proceedings – much heavier than administrative arrests – are starting to flood the streets against those who took to the streets (and maybe pushed a policeman in the heat of repression)» explains ANSA.

The story of the media mainstream is quite different when it deals with those who protest against the lockdown, as happened in the Scandinavian countries, in Austria but above all in Brussels, from where the European Commission threatens new sanctions against Russia for the alleged repressions in Moscow. to unauthorized events and, therefore, in clear violation of public safety laws.

«The Brussels police made 488 arrests during Sunday demonstrations against unauthorized anti-Covid restrictions. This was announced by the Belgian agency. Fans of some Walloon and Flemish football clubs were also detained. Police seized various dangerous items, from knives to flares. Some demonstrators chanted slogans such as “we want to regain freedom”» writes ANSA without defending the right to express their opinion which is the cornerstone of the controversy against the Kremlin.

«About 5,000 people, including neo-Nazis, took to the streets in Vienna to protest against anti-Covid restrictions, challenging the Austrian authorities’ ban. Protesters took up the appeal of the far-right party FPOE, which called the closures “scandalous”. The police carried out several stops because the crowd refused to disperse, instead trying to head towards the parliament and blocking the traffic».

The reference to the far right is obviously mandatory – although probably unfounded because it is inherent in the protests in Austria – to trigger political conspiracies that the mainstream has never once cited in reference to the 2014 coup in Ukraine and the civil war in the Donbass where real action is taking place by military neo-Nazi groups such as the Azov Battalion, armed, in a historical paradox, with Israeli-made automatic rifles.

«In recent days, former Interior Minister Herbert Kickl, a member of the FPOE, had made an appeal to take to the streets this Sunday against the curfew and the third lockdown decided by the popular-green government of Sebastian Kurz.

But the demonstration was banned due to the “damage to public order” it would probably have caused. The Fpoe presented a second request for authorization to the march to “defend democracy, freedom and fundamental rights”, but once again the police rejected it, speaking of the risks of an “increased transmissibility of the new variants” of the virus “he adds. ANSA revealing that the risk of contagion exists in Brussels but ignoring the pandemic dangers for the demonstrations in Moscow.

The relativism of the third millennium has now infected the media mentality much more than Covid-19. Therefore Navalny deserves far more rights than Berlusconi, despite having been convicted of an even greater crime, and Alexei’s fans can demonstrate while those who protest against the dubious lockdowns that are killing the economy and social anthropology must be arrested and severely punished. Bill Gates almost won, thanking ANSA & co …