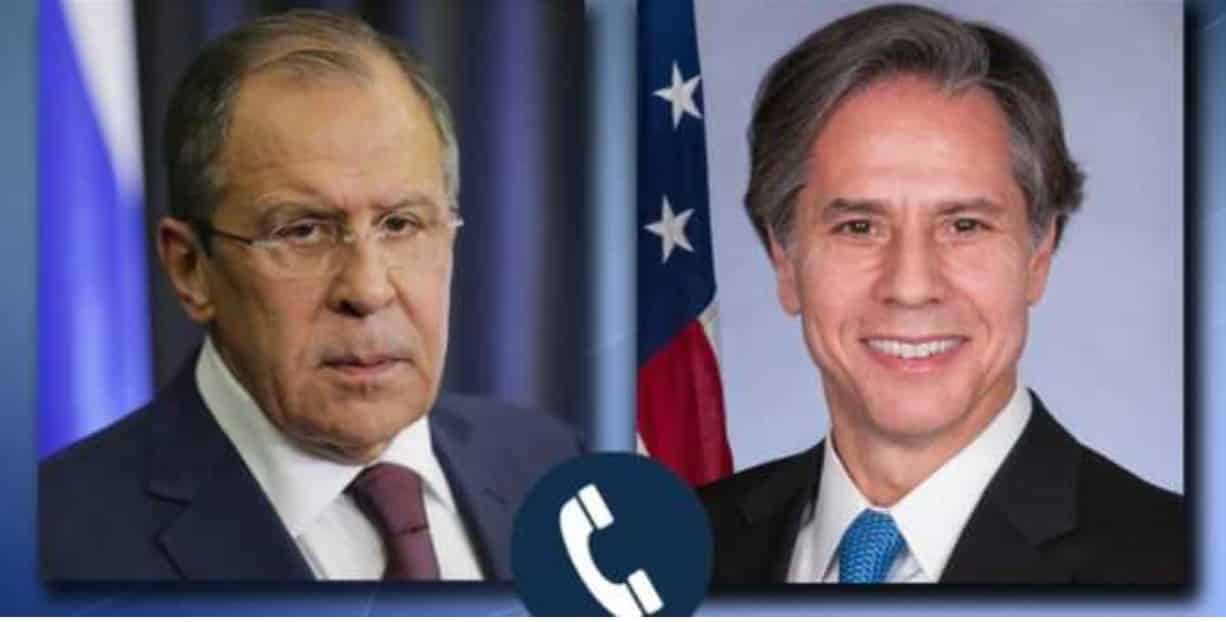 Moscow (ST): Russian Foreign Minister Sergey Lavrov reviewed in a phone call with his American counterpart Anthony Blinken a political solution to the crisis in Syria and the situation in Libya and Ukraine.

Russian Foreign Minister Sergei Lavrov and #US Secretary of State Anthony Blinken have discussed by phone a political solution to the crisis in #Syria and the situation in #Libya #and Ukraine. pic.twitter.com/ZzE3kH4lp2

The Russian Foreign Ministry said in a statement that Lavrov affirmed Russia’s readiness to normalize relations with the United States and conduct a constructive dialogue on a wide range of issues, noting that both sides indicated that extending the Treaty on Limiting Offensive Strategic Weapons until 2026 will contribute to improving conditions in the field of international security and strategic stability.

The two sides touched upon the issue of ensuring transparency in arms control by recalling the US withdrawal from the Intermediate and Short-Range Missile Control Treaty, as well as the future of the Open Sky Agreement.

During the call, Lavrov mentioned the proposals previously made by Russia to adopt joint Russian-American statements on the necessity of preventing nuclear war and not interfering in internal affairs.

On the issue of the Russian dissident Alexei Navalny, Lavrov clearly emphasized the need to respect Russia’s laws and judicial system.

The two ministers also called for  cooperation in the field of combating the pandemic of coronavirus infection, including through joint work in designing and developing vaccines.

Congratulating the interlocutor on taking office, the Minister expressed his readiness for a constructive dialogue on a wide range of topics.

As a follow- up to the telephone conversation between Presidents Vladimir Putin and Dzh.Biden, the interlocutors welcomed the extension of the Strategic Arms Limitation Treaty until 2026, which will help improve the overall situation in the field of international security and strategic stability. They touched upon the problem of ensuring predictability in the field of arms control, taking into account the US withdrawal from the INF Treaty , as well as in the context of the prospects for the Open Skies Treaty .

International topics discussed, in particular, assistance to a peaceful settlement in Syria and Libya , as well as the situation in Ukraine .

Sergey Lavrov reminded the Secretary of State of Moscow’s earlier proposals on the adoption of joint Russian-American statements on the inadmissibility of a nuclear war and on non-interference in each other’s internal affairs.

In connection with the situation around A. Navalny touched upon by E. Blinken, the Minister gave detailed explanations about the need to respect the legislation and the judicial system of the Russian Federation. Drew the attention of the Secretary of State to the problems related to the prosecution in the United States of those who protested in connection with the results of the presidential elections, and called for ensuring the transparency of the relevant judicial procedures.

Sergey Lavrov confirmed that the Russian side is open for joint work to normalize the entire range of bilateral relations on the basis of mutual respect and balance of interests. The readiness for mutual elimination of the accumulated difficulties in the functioning of the diplomatic missions of Russia and the United States on the territory of the two countries was emphasized . E. Blinken showed his readiness to organize an expert dialogue on these issues.

An agreement was reached on maintaining constant working contacts.