Corrupt, sadistic, and run by a hereditary dictatorship, Azerbaijan is unfit to rule over others, least of all Armenian Christians. Yet that iniquity could materialize due to the recent 44-day war by Azerbaijan, Turkey, and terrorist jihadis against the Artsakh Republic (Nagorno-Karabagh) and Armenia.

Since the war began, though, mainstream media have rarely pointed out Azerbaijan’s depravity and long-standing abuse of Armenians.

In the 1920s, Stalin transferred the ancient Armenian provinces of Artsakh — 96% Armenian — and Nakhichevan to Turkey’s friend, Azerbaijan.  The delusional tyrant mistakenly believed that this would lure Turkey into the USSR’s web.  That injustice has brought Artsakh nothing but agony.  Even before the transfer, Azerbaijan had been massacring Armenians in Artsakh and Baku.

Unlike 3000-year-old Armenia, no country named Azerbaijan existed before 1918.  Its inhabitants didn’t even call themselves Azeris until the 1930s. 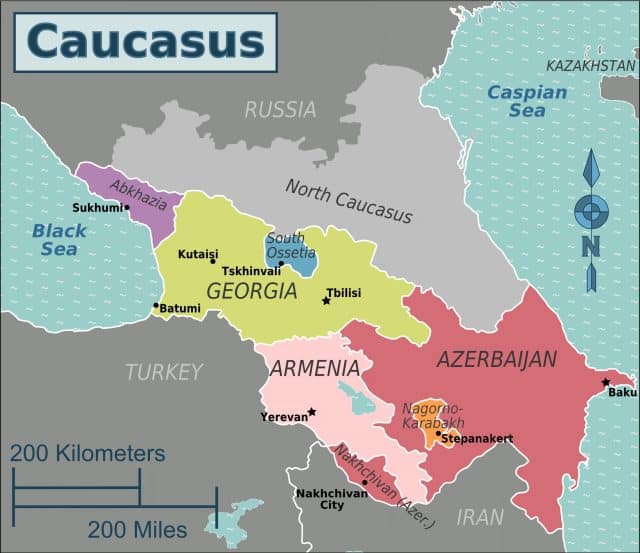 Artsakh was officially autonomous within Soviet Azerbaijan, but the latter held the real power.   Artsakh’s Armenians were persecuted due to raw Azeri fanaticism, not the Soviet system.

Artsakh voted to exit Azerbaijan in accordance with Soviet law in 1988 and international law in 1991 as the USSR dissolved.  In response, Azerbaijan massacred Armenian civilians in Artsakh, Baku, Ganja, and Sumgait.

The ensuing war ended in 1994 in victory for Artsakh’s Armenians.  Armenians fled the rest of Azerbaijan, and Azeris fled Armenia.

Azerbaijan proceeded to gorge on revenue from its gas and oil fields.  Yet it still mirrored its Soviet self: repressive, corrupt, violent, and anti-Armenian. Artsakh became doubly determined to never again submit to Azerbaijan.

“We [Azerbaijanis] must kill all Armenians — children, women, the elderly.  [We] need to kill [them] without [making a] distinction.”  After Azeri soccer manager Nurlan Ibrahimov posted that in October, the Union of European Football Associations banned him.

These kinds of venom have resulted in the horrors we see above.

Now you know why Artsakh’s Armenians have fought and died to live free from Azeri rule.  In their place, you’d do the same.

Artsakh is at least as deserving as other states that since the 1990s have achieved self-determination through international support, such as East Timor, Montenegro, and South Sudan.

Regardless of the recent war’s outcome, if the international community cannot see the justice of Artsakh’s case and effectuate a remedy consistent with self-determination, then there is no justice.

David Boyajian is an independent writer whose efforts focus on commentary and investigative reports regarding the Caucasus. His work can be found at http://www.armeniapedia.org/wiki/David_Boyajian.