[ Editor’s Note: Another of America’s Cold War legends crosses over the river to sleep in the shade under the tree. Condi Rice on MSNBC quotes a Schultz classic that “being Secretary of State and a Marine officer were the two best jobs he ever had.”

He was of course a classic blueblood, Princeton grad and then off to the Marines for WWII, and on to MIT when he returned to polish up with a Ph.D. in Industrial Economics and teaching at MIT for almost a decade

All that had prepared him for an Eisenhower Council of Economic advisors, which was followed by an appointment as Nixon’s Secretary of Labor, where he made history by imposing racial quotas for government contract with the unions.

The contractors eventually challenged the effort in the courts, but lost in the Appeals Court, and the Supreme Court declined to review.

As Secretary of State for Reagan, he was instrumental in Reagan’s outreach to Russia during the Gorbachev era, a period where VT’s deep bench has had a lot of background where our own Lee Wanta played an historic role, much of which was buried for many years until Gordon’s VeteransToday series.

Those were the days when political people often shared WWII veteran status, and those from well-heeled of families, Ivy League educations. Positions were not political payoffs but key talent building blocks in administrations.

The comparison between that era and Trump cultism of Reality TV show management, where everything was literally “All Hail the Chief”, is night and day.

Biden may give us a puff of fresh air from those former days with his administration filled with seasoned professionals, something much needed after four years of the Trump grifters where statesmanship was sorely lacking, due to our having a Commander-in-Thief.

George Schultz helped bring the Cold War to an end, while Trump mobbed up his administration to be around people he felt comfortable with… Jim W. Dean ]

A terrific teacher, a great businessman and above all, he will be remembered as the person who channeled Ronald Reagan’s great instincts about the Soviet Union into policies that helped end the Cold War. We’re all better for the 100 years that he lived.” 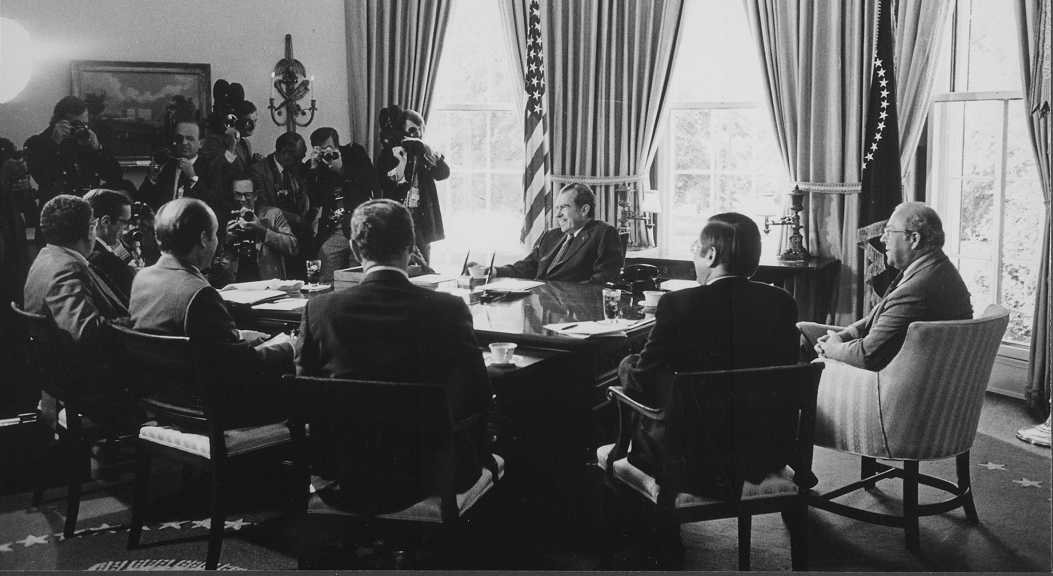 From the Washinton Post: On Sunday, Oct. 12, 1986, President Ronald Reagan and Soviet leader Mikhail Gorbachev had reached a climactic moment in their summit at Reykjavik, Iceland. Gorbachev proposed sweeping reductions in nuclear weapons if Reagan would constrain his missile defense plan, but Reagan balked.

During a break in the meeting, Secretary of State George P. Shultz hastily crafted new language to keep alive some hope for agreement.

When talks resumed, Reagan took everything further than arms control had ever gone before. He proposed to Gorbachev to eliminate “all explosive nuclear devices,” including “bombs, battlefield systems, cruise missiles, submarine weapons, intermediate-range systems, and so on.”

“We could say that, list all those weapons,” replied Gorbachev. “Then let’s do it,” said Mr. Shultz, giving birth to one of the most audacious attempts of the Cold War to eliminate nuclear weapons from the face of the earth.

The deal unraveled by nightfall but helped pave the way in the years that followed to wholesale reductions in nuclear weapons at the end of the Cold War.

“Shultz was a key player, alongside President Ronald Reagan, in changing the direction of history by using the tools of diplomacy to bring the Cold War to an end,” Stanford University’s Hoover Institution said in announcing his death. He was able to “not only imagine things thought impossible but also to bring them to fruition and forever change the course of human events.