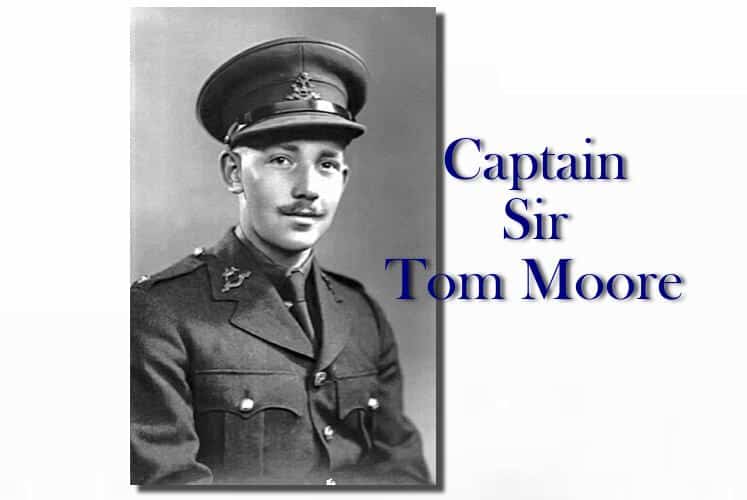 National hero Captain Sir Tom Moore sadly died, at the grand old age of 100, in an NHS hospital in Bedford on Tuesday. In his 99th year he started fundraising for the NHS, aiming to raise £100 by his 100th birthday. In the end he raised nearly £40 million, including charitable tax relief.

He became a national treasure, but then died, it would seem of pneumonia, after contracting Covid. Sir Tom was a veteran, who did good work in the Arakan with Bill Slim’s 14th Army. His coolness and old-fashioned sang-froid were an inspiration to the entire nation, apart that is from one nutty Church of England curate, who complained that Sir Tom was white and British. A lot of the blokes in the British Army were.

Sir Tom was the last person the government and Cabinet Office must have wanted to come down with Covid. Of all the people in Britain who deserved effective treatment nobody had a better claim, surely, than Sir Tom. Yet the NHS, which is hanging on to the £40 million cash, so far as is known let him die.

He should have been treated with either Remdesivir, which saved Prime Minister Boris Johnson’s life (and helped save President Trump), or Regeneron (technical name REGN-COV2), which along with Remdesivir and zinc saved Donald Trump. Had Sir Tom been given either treatment, or both, I would have expected the NHS to have trumpeted that fact to the high heavens.

It is a reasonable inference that the NHS left poor Sir Tom to drift away like thousands of mostly elderly Covid patients. This is the single biggest scandal in the NHS’s history, worse even than employing a mass murderer as a GP. It’s no wonder that so many NHS doctors are falling victim to stress-related illnesses like depression or Post-Traumatic Stress Disorder. It’s also no wonder that people have stopped clapping the NHS on Thursday evenings. Word is spreading.

It’s taken nearly 75 years but the British Medical Association’s timely warnings about state control of medicine are finally being given the attention they deserve. The NHS will have to go, along of course with the PM, the overpaid Professor Chris Whitty (who is now even being abused in the street) and Sir Patrick Vallance. How can the NHS justify giving Remdesivir to the PM but not Sir Tom? Apart from anything else Sir Tom was a much nicer person, no offense intended, and actually fought for this country.

Why was he not vaccinated?

By ‘he’ of course I mean dear old Sir Tom. There is no particular reason to vaccinate the PM, except against certain of the nastier social diseases, no offense intended. (Apologies of course to the late, great Robert Shaw, whose line that is, in Force Ten From Navarone, where as it happens he played alongside an old friend of mine, Edward Fox.) I can quite understand why he wasn’t vaccinated in January, after the poor man had caught pneumonia, but why not before Christmas? He was after all the obvious candidate to be the first to receive a vaccine.

This scandal isn’t going to go away. Ironically Sir Tom may save more lives in death than he ever did in life (not counting the Japanese of course), should his with respect inhuman sacrifice by the NHS finally lead to MPs and peers pressing for the widespread use of proven treatments against Covid. In the 21st century we are entitled to expect better performance from our medical profession than from New Guinea witch doctors, no offense to New Guinea witch doctors intended. (There’s probably a witch doctors association somewhere, possibly with Professor Whitty as its honorary president.)

Changing the topic entirely, I see that some readers have queried my assertion last week that the Meteor (a.k.a. ‘Meatbox’) was the world’s first operational jet fighter. The facts are that the first Gloster Meteor F Mk 1, EE219, reached the Royal Air Force’s 616 Squadron at Culmhead on July 12th 1944. The squadron achieved its first kill on August 4th that year, in a wizard prang of a VI by Flying Officer Dean.

Jerry came second, with the notoriously unreliable Me262, in August, and even that was with an experimental, not line, staffel, Erprobungskommando 262. The much-vaunted ‘combat’ between a 262 and an RAF Mosquito in July never happened, in fact I am not sure than any RAF Mosquito was shot down by a 262.

The only man I ever knew who flew a 262, dear old Eric ‘Winkle’ Brown, told me that they were a pig to fly, especially with one engine out. The aircraft would never have been accepted into service by the RAF, indeed arguably it never achieved full operational status, lacking reliable engines and being too directionally unstable for line pilots to fly safely. (The swept wings incidentally were adopted to move the centre of gravity aft – the aircraft’s VNE was too low for it to have encountered compressibility problems.)

The great Canadian actor Christopher Plummer sadly died this week. Ironically he never thought much of his most famous movie, The Sound of Music, where he played Captain von Trapp, the best-known Austrian after Adolf Hitler and much nicer. Plummer thought that the movie was too sentimental, but then maybe he was judging it by the standards of a world where the Good Guys always won.

As we saw in November the Good Guys don’t always win. Sometimes the evil ones triumph. I saw the Sound of Music as a child and it was inspirational, as well as enchanting and funny. (I always remember the scene with the nuns and the distributor bits.) It was a great movie and will long be remembered.

In a world full of evil dictators like Xi Jingping, Kim Jong-Un and Joseph Biden there is plenty of room for good old-fashioned schmaltz. Christopher Plummer didn’t just do schmaltz however – he had a wide range as an actor, on stage, screen and television. He was very good in Departure, almost his last appearance.

His character in The Battle of Britain, Squadron Leader Harvey, was superbly played. Edward Fox was in that movie as well as it happens, along with Lord Olivier, Sir Michael Redgrave and Sir Ralph Richardson. In a movie which has a good claim to have the strongest cast in movie history, with some of the greatest actors and actresses of all time, Christopher Plummer wasn’t out-acted. He was indeed one of the all-time greats.