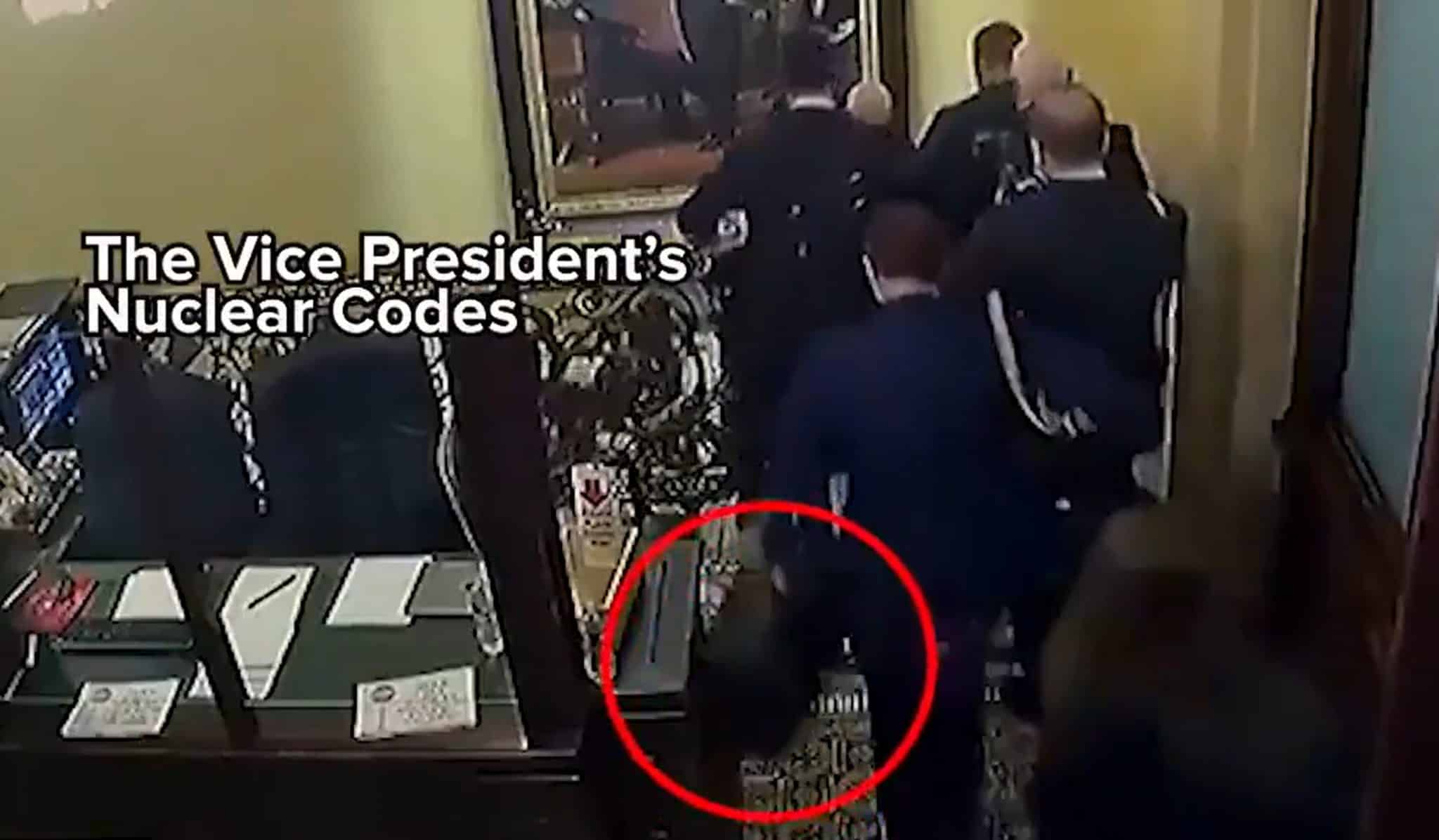 Everything needed to launch a nuclear attack was there and the Pentagon never knew about it as they had been mysteriously ordered to stand down during the attack…just like they had on 9/11.

“US Strategic Command became aware of the gravity of the incident after seeing a video played at the Senate impeachment trial Wednesday showing Pence, his Secret Service agents and a military officer carrying the briefcase with classified nuclear launch information running down a flight of stairs inside the Capitol to get to safety, the official said,” reported Barbara Starr and Caroline Kelly. “It is not clear if other national security elements of the government such as the National Security Council or top officials at the Pentagon were aware of the gravity of Pence’s position and those of his team.”

Daily Beast: The U.S. military’s top command was unaware that Vice President Mike Pence’s “nuclear football” was at risk of being captured by rioters during the Jan. 6 storming of the Capitol—until they saw it on TV this week.

We all know that the Insurrectionists came way too close to VP Pence. But holy crappanoli!! I didn't even know the VP had a nuclear football!!

U.S. Strategic Command only became aware of the close call after seeing a video played at the Senate impeachment trial Wednesday that showed Pence, his Secret Service agents, and a military officer carrying the briefcase with the classified nuclear-launch information running down a flight of stairs inside the Capitol to get to safety, a source told CNN.

U.S. Strategic Command only became aware of the close call after seeing a video played at the Senate impeachment trial??? https://t.co/j6Ry7VyyNv

The vice president always has a backup of the president’s “football” in case the president becomes incapacitated. Kingston Reif, an expert on nuclear-weapons policy at the nonpartisan Arms Control Association, told CNN the incident “ought to raise further questions about the rationale for the anachronism that is the football.”

This is insane. We knew of Trump nuclear launch danger but not that mob came within ONE MINUTE of accessing it via Pence. Launch process is quick & easy, "like reading a menu at Wendy's," made simple so even a simpleton like Trump can do it.https://t.co/Nr9p0ezmCg

Please spend 2 minutes of your day going through this

Video shows Capitol rioters got close to Pence's nuclear football. Yes, turns out VPs have their own nuclear footballs. What are the implications of that? My @Slate column: https://t.co/E8V7UmQNgN

Trump posted a tweet attacking his own vice president for lacking “the courage” to overturn the election for him―enraging his violent mob even further―just minutes after learning that Mike Pence had been removed from the Senate chamber for his own safety. https://t.co/M15YA0i2x7