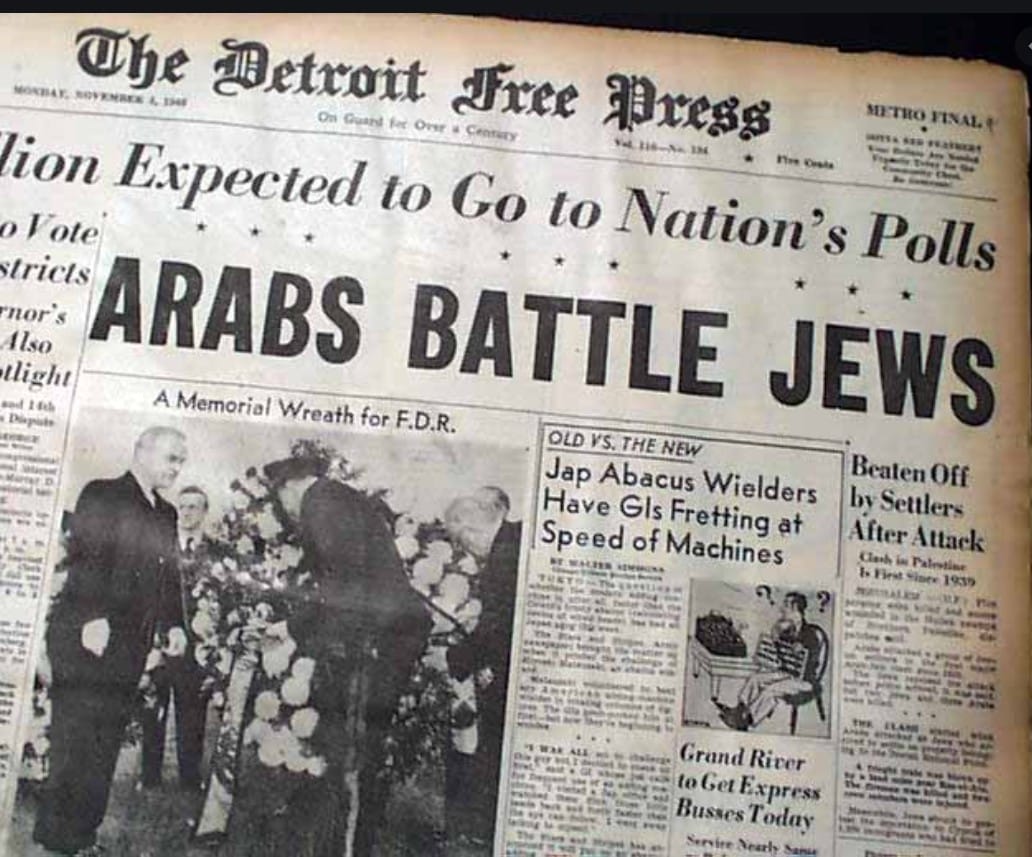 On July 22, 2006, Rupert Murdoch’s Wall Street Journal published a story about the war between Jews and Arabs in Detroit over the Middle East.  The entire story is fabricated of course and Murdoch is a longtime supporter of right wing Nazi extremism though Fox News and Sean Hannity.

Jews and Arabs in Detroit could care less, they have other problems.  Murdoch, however, would love to see them fighting in the streets.  After all, he had a major role in the January 6 coup.  When Americans destroy each other, who profits?

With the death of Sheldon Adelson, architect of right wing minority rule in the US, America’s Jews are now coming back into focus.  The love affair between neo-Nazi’s in the US and Zionists was largely driven by Adelson’s massive donations to extremist politicians who expressed their supremacist tendencies through hatred of African Americans and Muslims.

Now they are safe to return to hatred of Jews.

Two generations of American Jews have been raised as “worst of the worst” gentiles, identifying with the “hillbilly right” much the same ways as German Jews too often identified with their Nazi persecutors.  However, it took pretty much less than 15 minutes for the Nazis to give up on communists and trade unions and focus on Jews.

It has taken several decades for Reagan’s coalition of “raised in ignorance” lower and middle management types and evangelical Christians to move from their hatred of “Messicans and Nigras” back to their real tradition, Jew hating.  Now they are back and Jew hating is at the absolute heart of the GOP where it belongs.

Backing the Jews was a great pastime for America’s unwashed right when the Palestinian genocide was at the height of popularity.  Whatever group controls the media and Hollywood with shows like ‘Homeland’ and ‘FBI’ had stirred up a multi-decade frenzy that led the US into two decades of war on Islam in response to a nuclear attack on New York by Israeli and Saudi intelligence aided by American and Canadian gangsters.

Yes, it takes a few gallons of kerosene (jet fuel is kerosene) to vaporize hundreds of thousands of tons of structural steel and flood a square mile of New York with ionizing radiation, killing thousands with cancers.

Beirut went the same way, flattened by lawn fertilizer than won’t burn when hit by a blow torch. Lying to idiots is so easy.

So, who are the Jews anyway and will it be necessary, once Biden is gone, to lock them up in camps again?  Well, what I remember from the 1950s, having grown up with Jews, is prettymuch this:

Jews held jobs, worked in factories, but many if not most held second jobs, buying and selling.  They also saved their money and sent their kids to school.  Then, later, by magic, their kids who became doctors and lawyers or stockbrokers and business owners, started “sucking the lifeblood” out of poor American workers.

This line of thought began well back into the 19th century, even the 18th century, based on “blood libel” and “they killed Christ” traditions.  When American conservatives, during the 30s and beyond, fell in love with Hitler and his American populist cohorts, hating Jews became hating “communists.”

Then again, so many Democrats were Jews and didn’t FDR start the war against Hitler who was finally going to give Jews “what they had coming?”

Problem now, even with Adelson dead, the real father of America’s powerful Nazi right, there are still powerful organized crime figures, most Jewish, who have hard wired themselves into such secure positions in American society that they find Nazis and Jew hating amusing.

So, are America’s Jews really vulnerable?  That answer is sadly a resounding YES.

The Jewish traditions that had led to political influence through supporting social justice, supporting organized labor and supporting  a free press are a thing of the past.  The press is dead, beyond dead.

Let’s look at Detroit.  Detroit has a huge Islamic community and a huge Jewish community.  Both are, today at least, politically conservative and financially prosperous.  Though they live in slightly separated areas of the metropolitan region, there has never been an iota of hostility between Islamic and Jewish communities.  In fact, they often act as one in both commercial and cultural developments.

Yet, if one were to believe TV, Jews hide in their homes from Muslim terrorists while armed Jewish gangs hunt down hapless Palestinian’s in the streets. In fact, both communities have little or no crime other than Medicare fraud and legal malpractice.

Of course this is what things were like in Palestine at one time as well.  Jews and Arabs are, to an extent, culturally identical.  Then again, aren’t we all? So, who profits on peddling hate?

Nazis do and America now has 200,000 armed Nazi extremists, led by Oath Keepers, Proud Boys and the police union, funded by, by whom?  We know they get money but where does it come from?

It comes from powerful Jewish billionaires, some of whom run the ADL, AIPAC, the JDL and SPLC, among others.  So, what’s their game?  Is it profit from social unrest?

Is it looting America blind while chaos rules? Are Jewish billionaire gangsters really “Jews?” Do you really want to know how much Rothschild cash went to Adolf Hitler? History can be cruel and confusing.  Stick with us.