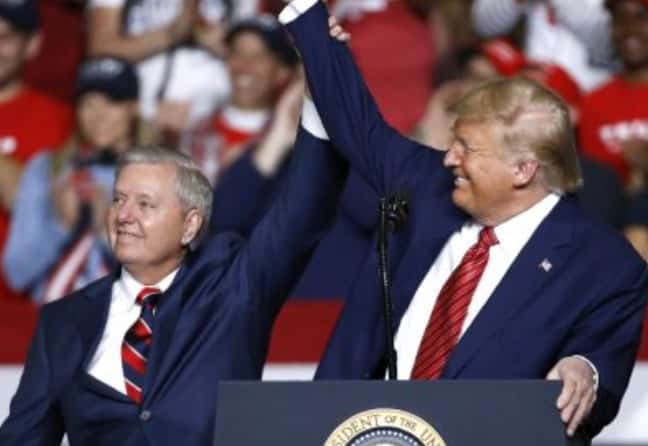 Vox: In Georgia, a criminal investigation into former President Donald Trump’s post-election conduct is expanding to include close Trump ally Sen. Lindsey Graham, according to a Friday report by the Washington Post.

Breaking WaPo: The Fulton County DA plans to scrutinize Lindsey Graham's phone call with Georgia Secretary of State Raffensperger as part of her criminal investigation into whether Trump or his allies broke Georgia laws while trying to reverse his defeat.https://t.co/hrJJk8VfSU

The investigation, which was opened by Fulton County District Attorney Fani Willis earlier this month, will probe whether Trump — and now Graham — violated state law in the course of Trump’s attempt to overturn the election results in Georgia following the 2020 presidential election.

Georgia's Secretary of State's office opened a probe into former President Donald Trump's efforts to overturn the state's 2020 election results, a step that could lead to a criminal investigation by state and local authorities https://t.co/gAYdKQ6Fyv pic.twitter.com/APXQPfljiK

According to Georgia Secretary of State Brad Raffensperger, Graham — a Republican from South Carolina — asked Raffensperger in November whether the secretary of state had the power to throw out all mail-in ballots in certain Georgia counties, a move that could potentially have tipped the state, and its 16 electoral votes, to Trump in the November election.

Hopefully we're about to see much more of it. https://t.co/IZ5mJ9w5oF

Raffensperger was reportedly “stunned” by Graham’s question and rejected the idea, which would have been beyond his power as secretary of state. After multiple recounts, President Joe Biden ultimately won Georgia by 11,779 votes, becoming the first Democratic presidential nominee to do so since Bill Clinton in 1992.

A spokesperson for Graham told the Post that Graham has done nothing wrong, and suggested that the investigation might be politically motivated.

.@MaddowBlog: It's not every day that prosecutors launch a criminal investigation into a former president's efforts, but that's precisely what's happening in Georgia. https://t.co/pt2Wv3WEwJ

“Sen. Graham was asking about how the signature verification process worked,” the spokesperson said. “He never asked the secretary of state to disqualify a ballot cast by anyone. The timing on this is also quite curious. It seems to be a less than transparent effort to marginalize anyone who helps President Trump.”

Prosecutors look into Donald Trump's phone call asking an official to "find" votes from the electionhttps://t.co/YJRQ75KNDU