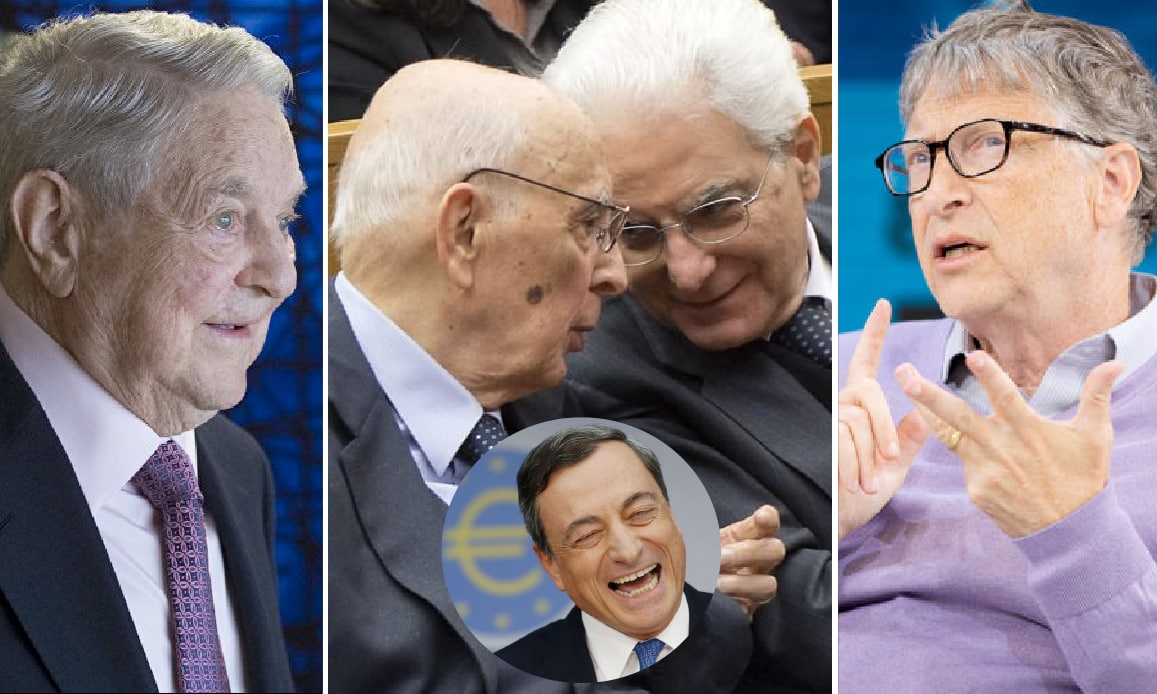 Mario Draghi, former president of the European Central Bank, after presenting yesterday the list of his 23 ministers to the President of the Republic Sergio Mattarella is ready to go to Parliament, Tuesday in the Senate and Wednesday in the House, to collect the now obvious “standing ovation” deriving from a political mass of which the memory had been lost in the history of the Italian Republic.

At 12 (UTC + 1) noon today, Saturday 13 February, there was the oath of the Prime Minister and the members of the new government at the Quirinale Palace. Draghi’s govt so will be soon reality as forecasted by Gospa News weeks ago…

Italy Falls down in ECB Hands. Draghi is appointed PM to form New Govt. As forecasted by Gospa News days ago

The support guaranteed by the center-leftist (Democratic Party, Italia Viva, LEU with some defections) by the 5 Star Movement which, with some votes against which will divide the camp, voted for it on the same web platform Rousseau who a few years ago had put his Draghi in the crosshairs for the globalist lobbies of which he was a leading exponent, from the European centrists of the small parliamentary Mixed Group, and finally from the kneeling center-right parties of Forza Italia (former Prime Minister Silvio Berlusconi) and Lega (Matteo Salvini) will guarantee the Prime Minister charged with the certainty of having an abundant and solid majority so as to make the votes of confidence in his new government a mere formality.

Only Brothers of Italy by Giorgia Meloni, for consistency, has distanced itself from the great binge of ministerial seats by deciding not to support the nascent Draghi government.

But if Draghi is ready to take the reins of Italy, Gospa News is also ready to reveal all the “dangerous” relations not only of his, between chastisement and international financial lobbies to which he refers, but also of some of his technical ministers who will take on highly strategic positions although they have embarrassing conflicts of interest that connect them to George Soros and Bill Gates, the two megadonors of the US Democratic Party who, after the nomination of their candidate Joseph Biden as president, will be able to establish a perfect “theatercracy” in which even characters  authoritative like Draghi himself will risk being “puppets” in the hands of these two puppeteers.

Next to them, as emissaries of the New World Order in Italy, there are obviously Giorgio Napolitano and Sergio Mattarella who not only both come from the establishment of the Italian Democratic Party, having become authoritative after the election of Dem Barack Obama in the US in 2009, but, as we will see in the next installments of the “NWO conspiracy against Italy” dossier, they were the perfect directors of the choice of the former ECB president to bind Rome more and more to Brussels.

This may happen with financial pacts that no government of any future election will ever be able to more to break, just like the seigniorage of private banks (members of the ECB spa) imposed by the Treaty of Maastrict on the single currency that became a halt for Italy when the penalizing lira-euro exchange rate was set at £ 1,936.27 thanks to the advice of Draghi to government chaired by Romano Prodi, future PD leader.

On 24 November 1996, in fact, the Italian delegation led by the Minister of the Treasury Carlo Azeglio Ciampi – present Mario Draghi (director general of the Treasury) for the Treasury and Antonio Fazio and Pierluigi Ciocca for the Bank of Italy – flew to Brussels where holds the ECOFIN, the meeting of European economic ministers. Agenda: the return of the lira to the European Monetary System.

At the meeting, the exchange rate was fixed at 1936.27 lire for one euro. This parity, which cannot be changed according to the Maastricht Treaty, corresponded to 990 lire for a German mark at the time. The lira / euro exchange rate will remain so until 1st January 1999, the date of birth of the Euro, which will then physically enter into circulation on 1st January 2002.

Premier of that government was Romano Prodi, future Prime Minister of the Democratic Party in 2006, who became disliked to many Italians a year earlier for having presented at the University of Bologna, on October 30, 1995, the book of the speculator George Soros, of which he signed the preface in the Italian version despite the fact that the Magyar-American plutarch was the first responsible for the sinking of the lira in 1992, preparatory to its devalued euro exchange rate.

The occult plot of the New World Order actually began there, therefore today it is only evident an economic-financial project for the colonization of Italy started some time ago and accelerated by the pandemic triggered by the SARS-Cov-2 virus, believed by many virology and intelligence built in the laboratory as lead to suspect also by the dangerous experiments on the SARS virus infected with HIV in 2003 conducted by the Wuhan Institute of Virology since 2004 thanks to the funding of the EPISARS project initiated by the European Commission chaired by Prodi.

Subsequently, the same risky research with Gain of Function (the enhancement of the viral load for “dual use” vaccine-bioweapon purposes) was also conducted in the USA thanks to the PREDICT project financed by the Obama-Biden administration thanks to the USAID agency, a financial tool for foreign missions of the CIA intelligence together with the Bill & Melinda Gates foundation.

For now we limit ourselves to publishing the list of ministers (at bottom of article) so that the most expert in geopolitics understand who the future rulers may be to whom we will dedicate investigations and who will be the custodians of the future control of the health emergency but above all the socio-economic pandemic that, to because of the lockdowns, in 2020 it lost 444 thousand jobs due to the closure of 300 thousand companies and the loss in the agri-food and wine sector, among the most important for Italy, of 9.6 billion in turnover (source: Coldiretti association). Among the reconfirmed stands the name of a politician of very modest career and caliber but now armored chair: the Minister of Health Roberto Speranza (for the Leu left-party).

Speranza is the exponent of the Conte Bis government most targeted for the disputed and approximate management of the pandemic which resulted in two judicial proceedings. One at the Public Prosecutor’s Office of Rome, where he is under investigation for culpable crimes and an attack on the rights of citizens and the Constitution in relation to the restrictive rules of personal freedom for the Covid emergency, the other initiated by the Bergamo magistrates who heard him as a person informed about the facts in the investigation for false and culpable epidemic, regarding alleged macroscopic health-administrative mistakes and the lack of an updated emergency plan, a source of bitter controversy and scandal within the World Health Organization itself.

Fortunately for Speranza, however, the magistrates have not yet shed light on the treatments ignored and hindered by the same Ministry of Health such as cortisone, hydroxychlorichine and even the simple use of Vitamin D, then considered providential to stimulate the immune system against Covid-19. from a study released by the Turin Academy of Medicine. Despite this, as predicted by Gospa News, the outgoing minister was reconfirmed by the express will of the President of the Republic Sergio Mattarella. After all, even in the best plots of the New World Order, the “lightning rod” on which to discharge the blame for any unforeseen events can always be used …

Sign up for the Gospa News newsletter: because many alerts have arrived from Facebook and Google on imaginative violations of quality standards in the pandemic investigations, which have reached 41 reports (10 CoronaVirus BioArma and 31 WuhanGates) on the shameful conflicts of interest between those who have played with experiments on SARS viruses infected with HIV and on Big Pharma vaccines. For the courage to denounce all this, the lawyer Robert F. Kennedy jr has already been banned from Instagram in recent days in compliance with the new restrictive regulations launched by Facebook in accordance with the WHO.

There are 4 ministers from the M5S of the Draghi government, three from the Democratic Party, Forza Italia and Lega, one from Leu and one from Italia Viva. In particular, Luigi Di Maio, Stefano Patuanelli, Fabiana Dadone and Federico D’Incà belong to the M5S. Of the Pd are Andrea Orlando, Lorenzo Guerini and Dario Franceschini. Forza Italia is Renato Brunetta, Mariastella Gelmini and Mara Carfagna. The Lega are Erika Stefani, Giancarlo Giorgetti and Massimo Garavaglia. Iv is an expression of Elena Bonetti. Di Leu is an expression of Roberto Speranza.