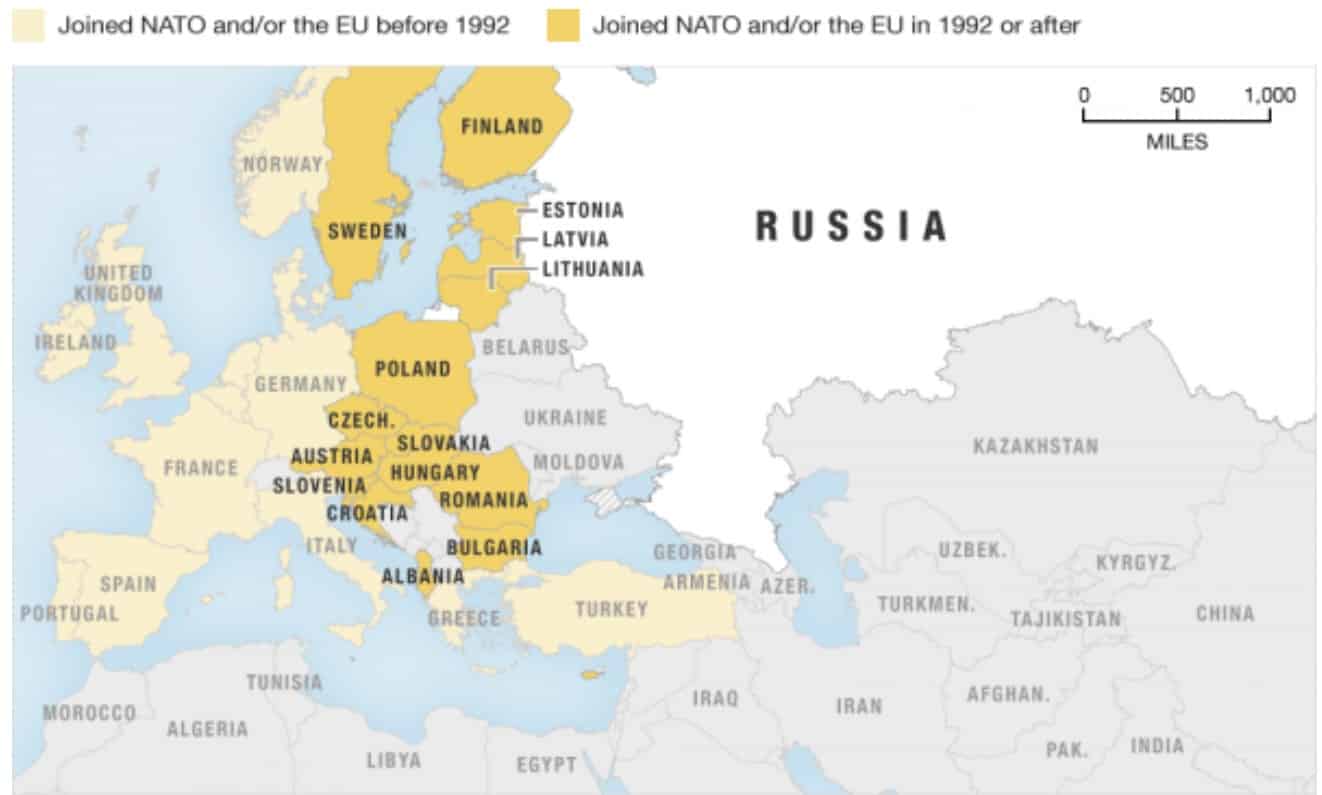 When in 1990 U.S. Secretary of State James Baker assured Russian President Mikhail Gorbachev that the North Atlantic Treaty Organization would not expand one inch eastward after German reunification, he was not alone in making that commitment.

What is not said about the pledge, and about Gorbachev’s subsequent playacting the personification of injured innocence, is that the very act of ceding the German Democratic Republic (East Germany) to the Federal Republic of Germany (West Germany) without demanding that the new united country become militarily neutral was effecting and legitimizing NATO’s expansion eastward toward Russia by the entire breadth of East Germany.

The Potsdam Agreement of 1945 negotiated by the U.S., Britain and the Soviet Union mandated the complete demilitarization of Germany, both the armed forces and the arms industry. It was the remilitarization of West Germany by the U.S. and its NATO allies and the absorption of the nation into NATO in 1955 that necessitated the creation of the Warsaw Treaty Organization (Warsaw Pact) later that year.

Surely in 1989, with the Warsaw Pact all but officially disbanded and the Soviet Union on its last leg, reunified Germany could and should have withdrawn from NATO. Apparently the Gorbachev government never raised that issue with the U.S.

1991 witnessed the death of the Soviet Union and the Eastern bloc and the birth of global NATO.

A decade after German reunification NATO would incorporate three former members of the socialist (or Soviet) bloc and the Warsaw Pact – the Czech Republic, Hungary and Poland – in the continuation of its drive to the east which has seen fourteen former socialist nations in Eastern Europe become NATO members. All new NATO member states recruited since the end of the Cold War are in the above category. 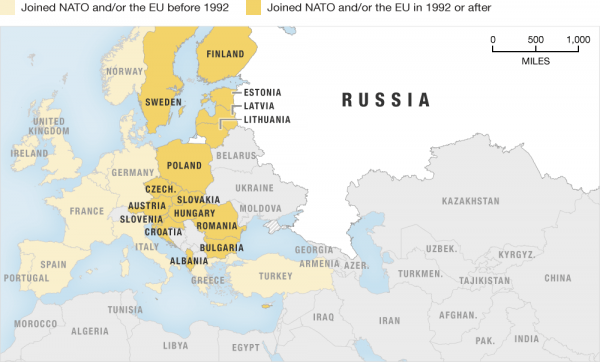 The only nation bordering Russia that is not part of the ever-tightening military encirclement of European Russia is Belarus, which is a member of the Collective Security Treaty Organization (CSTO) with Russia and regularly conducts joint military exercises with it.

Since the presidential election in Belarus last August, the government of Alexander Lukashenko has been warning of plans by NATO to invade the western part of his nation (the city of Grodno in particular) through neighboring states and NATO members Poland and Lithuania.

Two days ago the government of Belarus announced that it will be holding the Zapad 2021 military exercise with Russia this autumn. President Lukashenko, who made the announcement, also spoke of overall strengthening of military cooperation with Russia and the CSTO, clearly alluding to the U.S. and NATO:

“We have to strengthen the defense capacity of the country due to the escalation of the military and political situation in the Eastern European region. Especially near our borders.”

He specified the deployment of multinational NATO battlegroups to Estonia, Latvia, Lithuania and Poland, which hold annual war games with the deployment of “big army contingents from the American continent to Europe.” He also mentioned winter staff exercises conducted in Poland a few weeks earlier which employed computers to “to simulate a future war of NATO against a regional force grouping of Belarus and Russia.”

“Using those exercises…first of all, in Poland, they stimulate additional assignments for the development of their army in Poland and NATO troops,” Lukashenko added.

In December he also warned that the increasing military build-up of U.S. and NATO military forces on the borders of CSTO countries, meaning largely Belarus and Russia, is an alarming development.

At that time he stated:

“Once again the world is on the brink of an unbridled arms race. The most dangerous phenomena are getting worse, namely a military standoff between global centers of power. The buildup of military presence of the USA and NATO near western borders of the Collective Security Treaty Organization is a cause for serious concern.”

“Meanwhile, not only Belarus’ national interests are targeted by military activity. In this context one should also consider NATO’s statements about the development of some new strategic concept. I believe it is already clear for everyone who and what it will target.”

If Belarus is the only friendly neighboring nation Russia has in the west, it also has two buffer zones in the Caucasus: South Ossetia and Abkhazia. The two are half of what have been labeled frozen conflicts in the former Soviet Union, the other two being Nagorno-Karabakh and Transdniester. Georgia claims Abkhazia and South Ossetia, Azerbaijan claims Nagorno-Karabakh and Moldova claims Transdniester. The claims are based on the fact that the four regions in question had been autonomous republics or provinces in the former respective Soviet federal republics.

After last summer’s onslaught against Nagorno-Karabakh by U.S.-NATO military asset Azerbaijan, directed by NATO powerhouse Turkey, a 45-day war which caused the displacement of over a third of the population and the deaths of at least 3,600 defenders in a nation of only some 145,000 people, South Ossetia announced that it feared that Georgia, emboldened by the example of Azerbaijan’s and Turkey’s aggression and solidly backed by the U.S. and NATO, would attempt to replicate the “resolution” of a frozen conflict against it. Abkhazia would soon be a fellow target. (As Georgia attempted to do in the five-day war with Russia in 2008.)

With the installment of a pro-NATO government in Moldova last year and the Biden administration’s resolve to return to Ukraine with a vengeance, Transdniester, which is enclosed by those two nations, would be next in line for NATO-backed invasion.

There are Russian troops in Abkhazia, South Ossetia and Transdniester.

On February 9 the state news agency of South Ossetia, which has been reporting for months on regular incursions by Georgian security and intelligence forces, quoted the State Security Committee of South Ossetia announcing that an American RQ-4 Global Hawk remotely-piloted surveillance aircraft was spotted on the southern borders of both that nation and Russia.

The State Security Committee described it as follows:

“[O]n January 14, 21, the border authorities recorded flights of the American Global Hawk RQ-4B drone conducting aerial reconnaissance near the southern borders of Russia and South Ossetia. The UAV took off from the NATO airbase. Sigonella (Sicily, Italy), passed south of the South Ossetian-Georgian and Russian-Georgian state borders over the territory of the territories of Shida-Kartli, Mtskheta-Mtianeti and Kakheti.”

[The Global Hawk] “has a range of 5500 km with 24 hours stay in the destination area, its maximum flight duration is 36 hours, and its range is 22780 km. this aircraft is capable of acquiring an image of an area of ​​138 thousand square meters at a distance of 200 km. It was used in 2016 – 2017 for aerial reconnaissance of the territory of Donbass and the Crimean Peninsula.”

The last sentence indicates what the fifth and sixth “unresolved” conflicts are that NATO may soon be addressing and “redressing.”

“According to available information, Georgian military intelligence officers located in the border zone are conducting surveillance, carrying out search operations in the border area, and also practicing elements of a raid and penetration into the territory of South Ossetia with the aim of committing various sabotages, including under the guise of Russian servicemen….”

This is the standard model, from Kosovo to Syria, of the U.S. and NATO supporting cross-border attacks on the ground while waging an air war in conjunction with them.

Thirty years ago Russia, which more than any other country in the world given its history of invasions from those of Napoleon Bonaparte to Adolph Hitler, possessed security buffers in the other members of the Warsaw Pact and in the non-Russian republics of the Soviet Union, but now has only Belarus, South Ossetia and Abkhazia between it and NATO. If the U.S. and NATO proceed as they’re doing Russia will soon have no buffers; will be completely exposed and vulnerable. Alone with its nuclear arsenal.