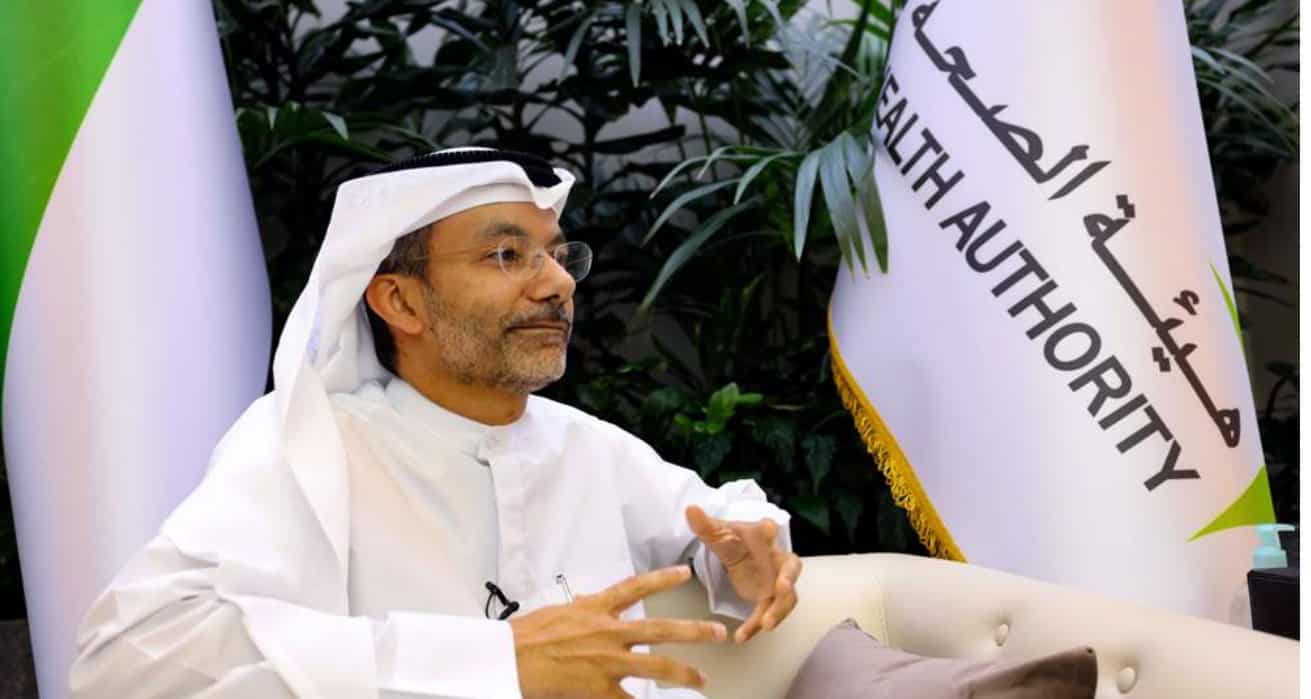 Press TV: Alawi Alsheikh-Ali, deputy director general of the Dubai Health Authority (DHA), speaks during an interview with AFP in the Gulf emirate, on February 10, 2021.

It all began in the Party City of the Persian Gulf, Dubai, as many countries tightened lockdowns on the eve of the New Year, Dubai opened its borders to tourists coming from across the world. Branding itself as a sunny, quarantine free escape hatch.

Football stars, actors and influencers along with thousands of ordinary people, flew to the tourist hub to spend the holiday period there. The world’s most open city during the coronavirus pandemic provided these travelers and revelers with a bolt hole where they could enjoy five star hotels and restaurants, crowded bars, accessible beaches and other social activities banned in their home countries.

No doubt, the large influx of rich tourists to Dubai brought an economic boost to its moribund economy, but soon the Party City had to pay a hefty price for it.

As many countries tightened lockdowns on the eve of the New Year, Dubai opened its borders to flocks of tourists coming from across the world, branding itself as a sunny, quarantine-free escape hatch.

Hard hit by months of lockdowns, Dubai finally decided to adapt easier entry requirements for foreign visitors, at the same time, the UAE authorities assured the public, at home and abroad, that they could handle the pandemic in the best way possible.

In the words of, Alawi Alsheikh-Ali, Deputy Director of the Dubai Health Authority, the approach in the UAE, and Dubai in particular, has always been underpinned by science and science informed common sense.

When you see that specifically tourism has taken such a massive hit in 2020. This is a grave picture for Dubai, in particular because Dubai has been reprofiling itself as a tourist destination for the last couple of years. The UAE has been slightly more forward looking than, for example, Saudi Arabia, in understanding that a petroleum based economy is not viable for the future, and as such they have been trying to reposition themselves in the global economy in different ways. For example, the banking sector as well as the entertainment industry and the tourism industry and luxury tourism industry in particular. So when COVID happens, and struck the world. This was a massive threat for the stability of this, let’s call it what it is, this artificial creation that is the United Arab Emirates and Dubai, in particular. So, I think that’s why Dubai has decided to look only at it from an economic point of view, without really looking at the possible nefarious consequences that it could have for itself, as well as for the world.

In December, hotel occupancy in Dubai rose to an average 71% according to data provider STR, reaching more than 90% at beach locations.

The new potent variant of coronavirus which originates in Britain has now spread to the Indian subcontinent.

Figures from the UK Civil Aviation Authority, showed nearly 300,000 people travelled between the UK and the UAE during November and December last year alone. This was around the same time as a new and highly transmissible variant of the virus was spreading in the UK. Subsequently, hospitals began to bear the brunt of this economic revival.

In late November, active coronavirus cases reached about 25,000, while the number hovered at around 2000 in early November, just before the tourism season started.

In other words, COVID-19 cases have quadrupled since November, to almost 4000 a day.

The rise in sickness and even deaths might be considered a worthy sacrifice in order to keep the economy going. It is a very bleak way of looking at things, but I think it is not too farfetched to think that there are people, especially those in power, who are thinking that way, not exclusively in the UAE but also … across the west in particular, I think this is what has happened here, the idea that the chugging along of the Emirati economy, the continuation of the expats immigration and emigration to and from Dubai, which is the beating heart of the Emirati economy. About 85% of the population consists of the foreigners. The coming in and coming out of expatriates and the coming in and coming out of tourists was considered to be their prime, and most important goal, and not so much the safe keeping of the public health.

The Financial Times has recently released a report which shows the gravity of the situation in Dubai. A doctor tells the Financial Times journalist, that “the combination of case volume and severity has hit government facilities hard”, adding that Abu Dhabi is asking private sector hospitals to give a hand with the raging pandemic.

The Emirates Airline says it has made some staff redundant due to the impact of the coronavirus pandemic.

Another doctor says, “The New Year’s shenanigans in Dubai, were an obvious superspreader event. After that cases have gone up quickly and we have the new variant too”. Another expatriate doctor reveals,” Everyone is trying to make extra space. There was a big shortage, as lots of infected people are coming through”.

The idea that you could have over 300,000 positive cases in a population of just over 3 million is a massive problem, this is a, it’s a scandal that something like this could happen, especially in a country that is incredibly rich, and definitely has the potential to contact trace, to test and to contain, and to quarantine.

It is good to see of course that the Emirati government is taking some actions now and they’re locking down, shutting down pubs and gatherings and parties and stuff like that, but, this is something that should have been done months ago and in fact in most of the world that has been done months ago.

There are countries in which no public gatherings have been allowed for almost a year now. And those countries are often the ones that have done the best in stopping the pandemic so the fact that the UAE and Dubai in particular opened up in July, again, and had this massive surge in December and pretending like nothing but the matter that nothing was going on this is absolutely ludicrous it’s absolutely scandalous.

Meanwhile the UAE health ministry is “urgently” advertising for nurses to work in Dubai and other Emirates at higher salaries.

Migrant worker in the UAE considered less than cockroaches

Abandoned by the government and their employers, many blue-collar migrant workers are now sleeping rough on the streets of one of the richest countries in the world.

That said, hotels, bars, beaches and shopping centers are still crowded. In spite of what the Emirati authorities have promised to do in order to cope with the resurgence of the pandemic, images of busy beaches and Instagram celebrities without masks, draw a dreadful image of carelessness in the face of a deadly virus.

According to Erin Bromage, a professor of biology at the University of Massachusetts Dartmouth, “They have brought the virus in, including the new variants in waves of new tourists and allowed it to spread through the community, as well as spread to uninfected tourists. The Tourists returned home and seeded infections there possibly the new variants.”

Dubai has unwittingly transformed from a tourist centre, into the COVID-19 Super spreader capital of the world.

A UN expert says three human rights defenders jailed in the UAE are being mistreated in conditions that may amount to torture.

According to the Associated Press, more than 900 Israeli travelers returning from Dubai, have been infected with coronavirus and the returnees have created a chain of infections numbering more than 4000 people.

Meanwhile Denmark has discovered one traveler coming from Dubai tested positive for the South African variant of COVID-19 and the Filipino authorities say they have identified a traveler, who had made a trip to Dubai in December, with the British strain.

We can look at the numbers in Dubai, which are horrible, the numbers of COVID cases that exist in Dubai right now, but that does not even show the extent to which Dubai has helped spread COVID to other countries.

This is something in which you see Dubai acting as an extreme version of a Western capitalist nation, in which we see that in Europe as well that a lot of governments have tried to lift lockdowns prematurely, have tried to lift restrictions prematurely, because they said what about the economy, without thinking about the human costs if you lift things prematurely and allow the virus to spread more. Now Dubai is not a Western power but they are basically, I like calling them a Western capitalist power in extreme variety, because they are trying to catch up so quickly to the development of, let’s say, the western capitalist imperialist world that they are really throwing away all caution to the wind and this is what we see, the consequences of that is what we see now.

By opening its borders to revelers and party goers during the festive period, Dubai didn’t find a panacea for its economic problems, but did certainly open a Pandora’s Box which could complicate the Global Health dilemma even further.

UAE and Israel have been interacting for some time

Amid much fanfare the UAE and Israel have recently decided to formalize, or as they like to put it to “normalize” their relations, despite their longstanding interaction in various areas such as trade and cybersecurity.