[ Editor’s Note: The Republicans need to clean house and get some new blood in, but that would require a political bloodletting they seem hesitant to engage in. In this case, they were trying to hinder Biden’s favorable ratings, thinking they could jump on the Texas energy problem and would have an easy shot on undermining climate change defense planning and prevention.

Fox News was quickly out of the gate with its focus on the ‘failure’ of alternative energy sources (ie. frozen wind turbines), and the ‘disaster’ it had caused. But Fox did not bother to even check in with the Texas state energy people first.

If it had it would have learned that ‘alternative energy source shutdowns’ was not the major cause of the millions of homes without power. There was a simple answer. The controlling equipment for the traditional energy sources froze up and shut the power off. That was it.

The biggest failure was with the gas line pumping facilities, as they all went down. But such news is not ‘sexy’ enough for the likes of Fox News, so it just pumped out its usual garbage, which now has blown up in their faces.

The video covers quite succinctly how the public does not want to foot the bill to protect against a once in 40 year weather event. And if a ‘solution’ is found where the cost is passed on to the taxpayers, even it they have demanded ‘the fix’, then they vote the politicians out of office.

We have seen this love affair the Trump Republicans have with the biggest lie, where even if the lie does not work, you just float another lie, and keep doing it until you hit a nerve with the mentally challenged Trumptards… Jim W. Dean ] 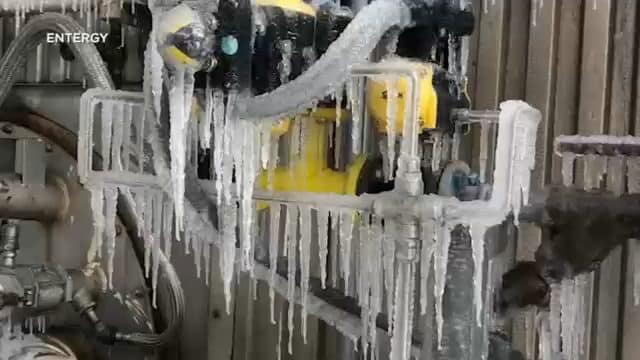 Frozen wind turbines in Texas caused some conservative state politicians to declare Tuesday that the state was relying too much on renewable energy. But in reality, the lost wind power makes up only a fraction of the reduction in power-generating capacity that has brought outages to millions of Texans across the state during a major winter storm.

An official with the Electric Reliability Council of Texas said Tuesday afternoon that 16 gigawatts of renewable energy generation, mostly wind generation, was offline. Nearly double that, 30 gigawatts, had been lost from thermal sources, which includes gas, coal and nuclear energy.

“Texas is a gas state,” said Michael Webber, an energy resources professor at the University of Texas at Austin. While Webber said all of Texas’ energy sources share blame for the power crisis, the natural gas industry is most notably producing significantly less power than normal.

“Gas is failing in the most spectacular fashion right now,” Webber said. Dan Woodfin, a senior director at ERCOT, echoed that sentiment Tuesday.

“It appears that a lot of the generation that has gone offline today has been primarily due to issues on the natural gas system,” he said during a Tuesday call with reporters.

You can read the full ABC article here: