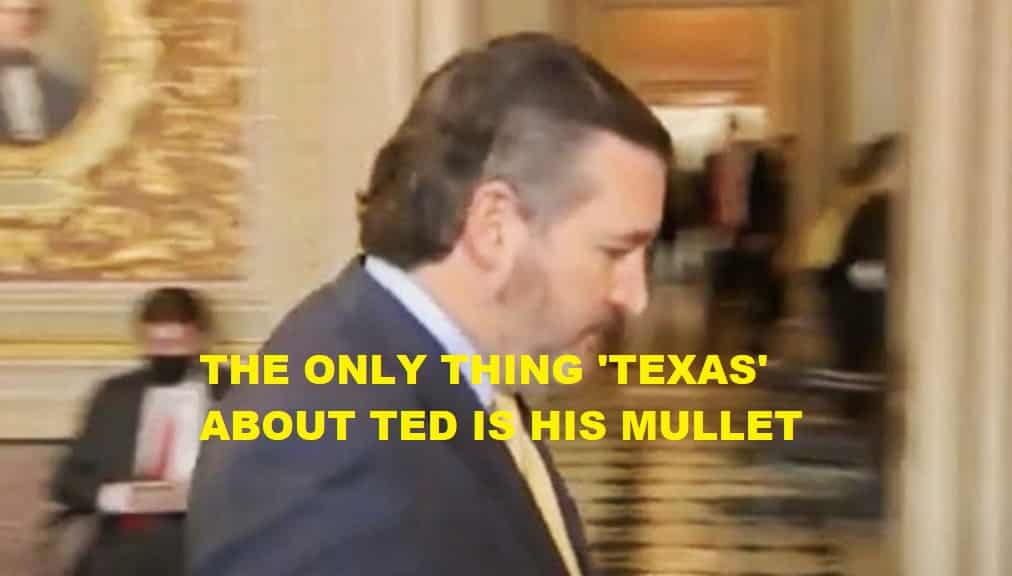 Statement from Director of Communications for Sen. Ted Cruz pic.twitter.com/5cXIkTTZiW

VT: The GOP runs on money.  They get their money by selling privileges to corporations, in Texas that meant privatizing energy supplies.  Some Texans have been running up gas bills of $500 a day under new pricing regimes approved by GOP regulators paid off by fake utility companies that are shells for overseas criminal cartels.

Some are looking at Goldman Sachs, where Heid Cruz, Ted’s wife works.  Sachs owns some of the “Texas companies” like Energy Future Holdings, that made millions in the not so accidental gas price ripoff hidden behind the not so accidental utility shutoff blamed, not so accidentally, on wind power by corrupt Greg Abbot…who is funded by the companies that have made so much on the deaths of so many, just like the Trump family has on COVID.

But there is a bigger story behind it.

private prop. is inviolate (I bow to prominent conservatives @GeorgeWill & @Ocasio2018 who oppose eminent domain taking) unless tied to crime. #Israel's occupation finds all Palestinians' homes & businesses to be illegal. And so with #Adelson's Macao holdings–subject to seizure! https://t.co/guFFkuBKGi

Many of the powerful companies that run Texas are owned by the Gulf Cartel, who with the Sinaloa Cartel runs organized crime in the Red States.

Just drove by Ted Cruz’s house in Houston. His lights are off but a neighbor told me the block got its power back last night. Also, Ted appears to have left behind the family poodle. pic.twitter.com/TmLyGQkASy

Wrote up the full story for @NYMag https://t.co/NCSPLX3Zcp

Past that, it is all run by companies that do business with China, primarily gambling operations.

China gave a special license for both gambling and totally supervised prostitution to the former Portuguese colony of Macao, which is run by the Adelson gambling operation and Benjamin Netanyahu.

#CnnDebate Ask why Sheldon Adelson imports his dealers from Macao when Vegas has 14.9% unemployment? #occupylasvegas

This organization, a front for the Chinese communists, is the biggest single funder of the GOP in Texas.

It is also Trump’s biggest backer.  No wonder Ivanka has had such tremendous business success in China.  After all, they own the GOP…and this is totally true, no wonder you hear them say China runs Biden.

Check VT’s Wikipedia, it says we work for Russia but Russia supports Trump…

Are you finally getting the picture?

Houston Chronicle: Soon after Carrol Anderson lost power in his Crosby home earlier this week, his oxygen machine stopped working. He had asked his provider for more tanks the previous week but didn’t get any before harsh winter conditions set in. The 75-year old Vietnam War veteran turned to two small bottles of oxygen he had, but his supply quickly depleted.

With no firewood left and temperatures plummeting, Anderson turned to his last resort to breathe: A small portable oxygen tank he kept in his truck.

Oh my. @American_Bridge has texts from Heidi Cruz planning the Cancun trip.

The group chats are not safe, Lovelies! pic.twitter.com/IqLYU2np0c

It was 19 degrees outside. He died in his truck Tuesday.

“He shouldn’t have had to die because he couldn’t breathe because we didn’t have power,” said Gloria Anderson, Carrol’s wife of 30 years, through tears in a telephone interview.

Their house was "FREEZING" — and she proposed a Sunday return. Cruz invited others to join them at the Ritz-Carlton in Cancún ($309 per night), where they had stayed "many times."https://t.co/Kzg5PZVpoG

Anderson’s death was one of four deaths caused by hypothermia that Harris County authorities announced on Thursday. Two people, Jimmie Gloud and Mary Gee, died at their Houston homes. A man was also found dead early Thursday in a parking lot in the northern part of Harris County, a fatality also attributed to the cold weather.

I'm sure it's a total coincidence that Heidi Cruz happens to be the managing director of Goldman Sachs, which owns several Texas utility companies, such as Energy Future Holdings, right at the time these companies spike their prices https://t.co/F7h6ee1yzJ

As temperatures rose and the Houston region began to thaw after several days of sub-freezing temperatures, the number of reported local deaths related to cold weather doubled on Thursday, bringing the toll of the crisis into sharper focus.  read more…