Home Investigations Cornel West vs. the Zionist mafia at Harvard? 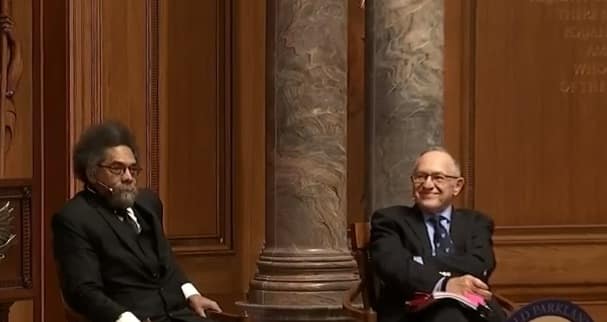 I want to state unequivocally again that I disagree strongly with Cornel West with issues like Black Lives Matter. But it seems that the Zionist culture at Harvard denied him, not because West has sided with BLM, but because West has explicitly chosen to attack Benjamin Netanyahu and much of the Zionist superstructure in Israel.

The claim from Harvard is that West’s work is not substantive enough, that he is “too controversial.”[1] That is certainly window dressing because if it is true, then how did Alan Dershowitz get tenure at the same school? Do they think everyone is blind?

The people at Harvard again needs to pick up Norman Finkelstein’s scholarly study, Beyond Chutzpah: On the Misuse of Anti-Semitism and the Abuse of History, which literally exposes Dershowitz as an academic fraud who got tenure at a major institution of the country. Dershowitz also had a long debate with Finkelstein on Democracy Now!, during which Finkelstein methodically pointed out that Dershowitz’s The Case for Israel has been plagiarized.

“sent members of DePaul’s law and political-science faculties what he described as ‘a dossier of Norman Finkelstein’s most egregious academic sins, and especially his outright lies, misquotations, and distortions.’”[2] In the end, Finkelstein was basically fired from DePaul University. After the event, the Chronicle of Higher Education reported that Finkelstein could not find a serious academic job—“not even as an adjunct” professor—anyway on the planet.[3]

During the 2005 debate, Finkelstein accused Dershowitz of plagiarism, lifting quotes from Joan Peters’ From Time Immemorial without proper citations. Dershowitz obviously did not like that. He even accused Finkelstein of anti-Semitism, despite the fact that Finkelstein’s relatives died during Nazi Germany!

Dershowitz was asked by British television reporter Riz Khan to appear with Finkelstein in an interview. Dershowitz declined, saying, “I will not be on your show with anti-Semites.”[4] He repeats the accusation in his new book, declaring that people like Finkelstein “have proved [that] even a Jew can be anti-Semite.”[5] He was even less subtle in a 2009 interview:

“Norman Finkelstein is a sick and deeply disturbed, self-hating Jew, who in his autobiography implied that his own mother was a kappo. He constantly compares Israel to the Nazis (though he seems to admire the Nazis and to despise Israel). He constantly invokes anti-Semitic stereotypes of the kind that were found in Der Stutterer. He is beneath contempt and deserves no further comment. He should be relegated to the dustbin of history and ignored.”[6]

Dershowitz argues in another publication that people like T. S. Eliot, Immanuel Kant, Thomas Edison, Henry Ford, Tacitus, and Cicero were also anti-Semites.[7] This is the kind of “academic” studies we are dealing with.

Dershowitz did have a debate with West on the Israel/Palestine conflict, and Dershowitz certainly was not pleased with West’s position. Obviously we are talking about Zionist privilege here. If West’s academic work isn’t substantive, then Harvard needs to start refunding thousands of dollars for putting Alan Dershowitz—the man who used a high school syllabus as an academic source!—on a pedestal.