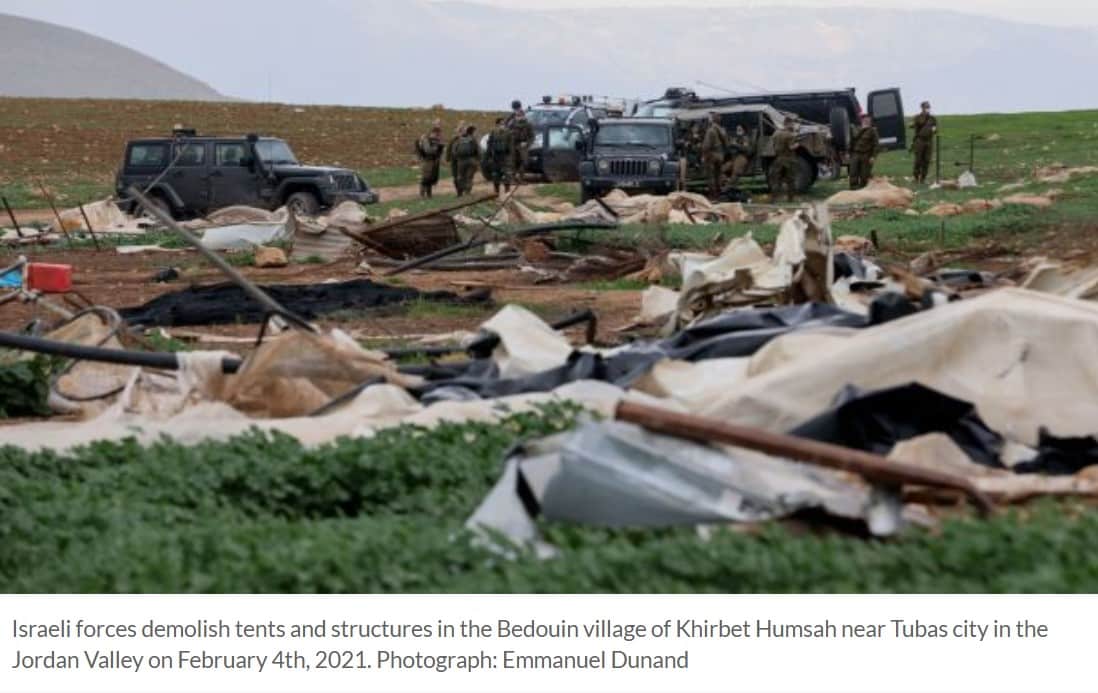 Irish Times: The labels read “Humanitarian support to Palestinians at risk of forcible transfer in the West Bank” and they lie in the rubble of a destroyed community that is home to over 60 people, more than half of them children.

The “Irish Aid – Government of Ireland” logos are clearly visible among the debris of broken solar panels, children’s belongings and destroyed tents, marking items donated to the Palestinian families by a European Union umbrella group that includes Ireland among its donors.

Israeli forces have destroyed Irish aid donated to Palestinian families in repeat demolitions of a village in the West Bank.
My story here: https://t.co/8ZUUP3ddC1
📷 @NRC_Norway and @btselem pic.twitter.com/D0ENu8QfiO

As the pandemic raged this winter, the village of Khirbet Humsah was repeatedly razed by Israeli forces in a struggle over territory in a remote part of the Palestinian West Bank that has been under Israeli occupation since 1967.

Over the last three months, nearly 70 structures provided to the community as EU aid have been destroyed or seized, according to the European Commission.

See photos from my colleague @jennychiggins @MdM_France, or @saritm0 @btselem. EU diplomats and Palestinian families watch as humanitarian aid – paid for by us, repeatedly – is confiscated. https://t.co/SyHGgfq4a5

And this week, undeterred by statements of condemnation from the EU and Ireland, Israel destroyed shelters funded by the EU to rebuild the community in front of a group of European diplomats who were visiting the spot, according to aid workers who were present.

The Israeli government has designated the area a military firing range, and insists its soldiers are repeatedly breaking up and seizing the donated tents and animal shelters because the village is illegal and the Palestinians need to move on for their own safety.

@simoncoveney @MichealMartinTD Ireland have a moral obligation to support people in the Global South. We could start by offering to vaccinate Palestinians in the West Bank and Gaza, then move on to the countries supported by @Irish_Aid https://t.co/wWvqJwOBPC

But European officials and humanitarian groups view the demolitions as a transparent attempt at a land grab that contravenes international law in an area in which Israeli settlements have been expanding in a way that erodes prospects for a viable Palestinian state.

The initial destruction of Khirbet Humsah occurred on November 3rd, the same day voters in the United States went to the polls, when Cogat, the Israeli military body that handles civilian affairs in the Palestinian territories, moved in to demolish the animal shelters, solar panels, latrines and tents that were home to roughly a dozen families who make their living raising sheep and goats.

The United Nations described it as the biggest single demolition in a decade, adding to a toll of destruction of some 689 structures by Israel across the West Bank and East Jerusalem in 2020 that the UN says made 869 Palestinians homeless.

The residents of Khirbet Humsah returned and rebuilt, pitching tents and animal shelters funded by EU donors to protect themselves and their livestock from the harsh winter conditions. But, on February 3rd, bulldozers accompanied by Israeli troops returned, knocking down steel and wooden structures in a demolition captured by Reuters television.

Then on Tuesday, February 16th, Israeli forces returned again. This time, it happened as a group of diplomats representing countries that had donated aid were visiting the community. The Israeli military dismantled shelters that had been funded by Ireland and other EU countries as the diplomats looked on, according to the Norwegian Refugee Council and the West Bank Protection Consortium, the umbrella EU partnership including Ireland that works to stop the forcible transfer of Palestinians.

“There were diplomats there from Poland, the UK and France, ” said Chris Holt, a representative of the West Bank Protection Consortium who witnessed the incident. “The diplomats were speaking to members of the community and the Israeli military came and seized the structures.” They dismantled and took five animal shelters that had been funded by Britain, Ireland and nine other EU member states, he said.

It happened a week after the EU’s foreign service had issued a statement condemning the demolition of the village, noting that its donated aid had been destroyed, and calling such demolitions “illegal under international law and . . . an impediment to a viable two-state solution”. Minister for Foreign Affairs Simon Coveney also condemned the demolitions as “egregious acts against a vulnerable population”.

NGOs say the incident shows that more needs to be done to protect the residents of the Palestinian territories. “We strongly recommend Ireland and other donors take concrete steps to hold Israel accountable for the destruction of humanitarian aid,” Holt said.

Tents set up to house the families after the demolitions have been confiscated on four occasions, according to a statement by Cogat. The Israeli agency told The Irish Times this had been done because they were “set up illegally and without the required permits and approvals” and residents had refused to move.

“Over the last few weeks, civil administration staff met with Palestinian residents of Khirbat Humsa and explained to them the dangers involved in staying within the firing range as well as offering them alternative space outside of it,” the statement said.

The United Nations has said it is almost impossible for Palestinians to obtain permits due to a “restrictive and discriminatory planning regime”, that such demolitions are “designed to coerce Palestinians to leave their homes”, and that the demolitions and forced transfer of people are a “grave breach” of the Fourth Geneva Convention.

Aid workers say that the repeated confiscations and demolitions have left already-poor families in desperate conditions worsened by severe winter weather, with their livestock at risk of perishing without the shelters.

Israeli expansionism is seen to have been emboldened by the administration of former US president Donald Trump, and Khirbet Humsah was among the lands earmarked to be given to Israel under proposals jointly unveiled at the White House with Israeli prime minister Binyamin Netanyahu last year.

The election of Joe Biden and Ireland’s assumption of a seat on the United Nations Security Council have raised prospects of renewed pressure on Israel over the issue.

But when the EU’s foreign ministers next meet in Brussels on Monday, the matter is not on their agenda, which is congested with issues ranging from relations with Russia, the coup in Myanmar, violence in Ethiopia, Beijing’s encroachment on Hong Kong, Iran, Belarus and a reset in the EU’s relationship with the US.

Officials privately acknowledge that other pressing foreign policy priorities have crowded out concerns about the Palestinians, and that Israel is clearly indifferent to repeated European statements of condemnation – while being aware that attempts to agree stronger joint EU action are likely to be stymied by member states such as Hungary that habitually block the required unanimous vote.

Conor O’Neill, a researcher with Christian Aid, which works with local partners in the occupied territories, said the events underscored that Irish policy needed to evolve beyond providing aid and issuing statements of condemnation.

“This kind of thing happens in a context of near total impunity, in which really, really serious breaches of international law are met with strongly worded statements but nothing beyond that,” O’Neill said.

“The question is what is the long-term strategy? Are we going to keep funding houses and schools, see as they are destroyed, and then fund them to be rebuilt?”