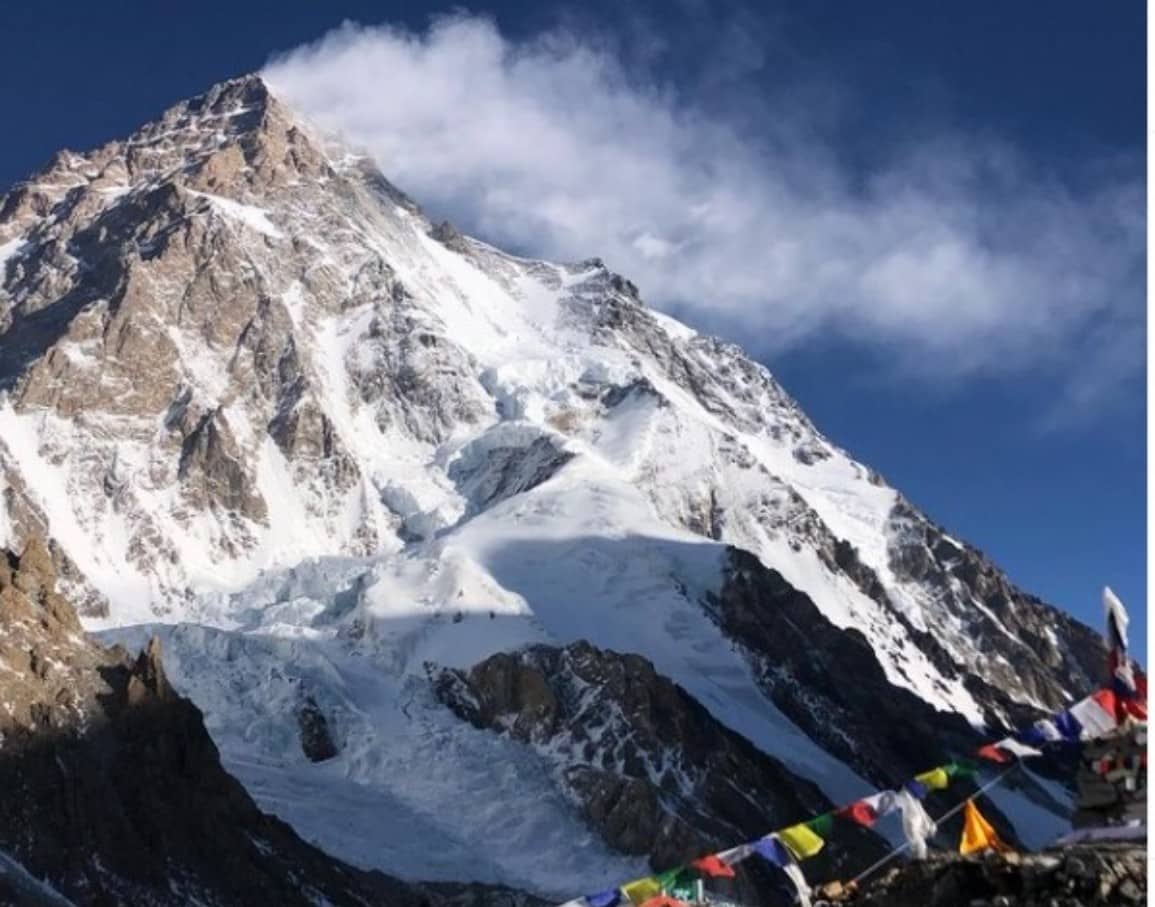 On 5 February 2021 as John Snorri, Muhamad Ali Sadpara, Sajid Sadpara and Juan Pablo Mohr were challenging K2, a plume of cloud hung over the summit. As events unfolded, this plume became the dreaded K2 weather. With many contrasting and conflicting statements by those who returned from Camp 3 and 4 on that fateful night, and the fake news media, my effort is to clear the ‘Fog of War’, dig out facts and tell a story closest to reality.

At a time when film maker Elia Shakaly was thinking of survival in Japanese Camp 3, his friends were foraying into the dangers of unknown. I do not wish this pyre to smolder anymore. It means a closure for the families who must know that their loved ones were Les Hommes Extraordinaire,  set out to accomplish something superhuman; for Pakistan and annals of high altitude mountaineering. I wish to identify that quest for a bit extra, a final push and the extra mile. Some make it, others don’t. But there is always one common denominator. These men and women are extra ordinary.

As a keen follower, my anxiety grew when John Snorri’s GPS went a bit erratic and then switched off at 7:15 AM on 5 February 2021. Hours of climbing lay ahead and they were getting late. The cloud overhang was getting menacing. Unlike the Nepal-10 joint expedition that reached the summit on 16 January 2021 at faster pace despite rope fixing, the slowness and complete blackout on information raised alarms. The gathering clouds observed from base camp ran chills in spines.

The earliest they could reach the summit was around 5 PM. This meant ‘touch and go’ followed by the long traverse across the Shoulder in race against the deteriorating weather. Knowing the mountains, this was a very big risk the four had undertaken and they needed every bit of good luck and prayers.  Cognizant that the window of opportunity was extremely narrow, I tweeted “Allah Khair” meaning God protect and be with them. I also prayed for the tenaciousness of human valor and a miracle.

But all was not well. Trackers were dead and sat phones switched off. Even Sajid who parted company at 12 noon due to oxygen malfunction returned to Camp 3. Anxious and worried, he dared the climb back towards Camp 4 to find nothing in extremely poor visibility. Dawa Sherpa who had the latest weather reports advised him to descend immediately to Base Camp which he did by midnight. From Bottleneck to the long wait at Camp 3, then up looking for headlamps in vain and back to base camp must have been a lonely, painful and arduous descent for the young college graduate whose expedition partners including his father were missing.  The cause of motivation and strive an extra bit was gone. With such demoralization, the feat that he descended alone, tired, broken and depressed is another superhuman effort.

Confronted by lack of information and electronic data, there are only two types of witnesses. First,  those including Tomaz Rotar, Sherpa Timbo and others who retreated from the crevasse ahead of Camp 4. Thereon, only Sajid Sadpara becomes crucial to dig the truth. He was with the group till 12 PM. His evidence fills many gaps and dispels many doubts. My conversations with him give an impression that back at camp 3, he was aware of dangers and the tragedy that could have befallen.

There is a question repeatedly raised. Why John Snorri’s team missed the summit push along with the Nepalese, when it was already a shared summit? Competition according to Sonorri, , Mingma G and  Nirmal Purja was intense. Snorri also carried the scars of an aborted expedition on K2 with Tomaz Rotor and Mingma G last season.

But despite the past experience, new friendships were made. John Snorri’s team had fixed ropes up to Camp 1 and extended to the Japanese Camp 3 and also delivered 700 meters of rope to Mingma G at camp 2, who fixed it a day later to Camp 4 at 7,600 meters and beyond. Nirmal Purja also carried 200 meters rope to be fixed enroute to the summit. Rope fixing was a shared effort.

According to Mingma G and validated by Sajid Sadpara, the weather at Camp 2 on 15 January made a push dangerous, while Camp 3 and above enjoyed a good weather window. The Nepalese decision to summit was impromptu and needed convincing from Mingma G because reports from Dawa Sherpa, Nirmal Purja and John Snorri contradicted him.

Nepalese led by Mingma G took the risk and succeeded. He personally fixed ropes 50 meters short of Camp 4 including a passage on a nearly vertical wall of ice and rock. Sajid confirms the presence of ropes on this route used by his team and Seven Summit climbers. This includes Tomaz Rotar who went up and down these ropes.

That Sajid Sadpara and Tomaz Rotor mention the presence of ropes in the crevasse 50 M ahead of Camp 4 towards Bottleneck dispels many doubts. The last point at which Sajid Sadpara saw his team using the fixed ropes was where the narrow near vertical rock gully opens up into a couloir. This is the place where the route turns sharply left and follows along the icefall and serac to the summit slope. He and Tomaz Rotor mention dense powder snow. This historically facilitates the ascent to summit.  Sajid remains convinced that his team made it to the summit and tragedy struck on the descent.

According to Sajid, John Snorri left Camp 3 at 11:30 PM on 4 February. Snorri’s GPS switched on at 23:58 PM at an altitude of 7379 meters. By 3:49 AM 6 February he was at 7961 meters. It can be inferred that between this location and 4:55 AM he was on the gradual descent towards the Bottleneck. That is when he came across a big crevasse between Camp 4 site and the Bottle neck, and met Tomaz Rotar who was already there along with Sherpa Timbo. Both turned back while Snorri waited alone for his team. Tomaz Rotor avoids timelines in his narration but the light he talks about is certainly the false or early dawn and not a moon that was in the fading quarter.

Sajid followed Snorri half an hour later while Ali Sadpara left at 2 AM 6 February. Ali and Sajid were confident they would catch up John Snorri before the Bottleneck which they did. Sajid confirms that he met Tomaz Rotor below Camp 4 and insists that at that time his father had not caught up with him. He also confirms that he was using oxygen and he mentioned his regulator problem to Tomaz Rotor. He also confirms he saw many stragglers from Seven Summits including Sherpas descending from Camp 4.

According to Sajid, already a summiteer on K2 in 2019, the landscape ahead of camp 4 was completely different. There had been heavy snow and a big crevasse about 2.5 meters had opened up 50 M ahead of Camp 4 site and the Bottleneck. Sajid confirms that the Nepalese briefed them about this crevasse at the base camp but it had since widened. This is where he came across Juan Pablo Mohr who was without oxygen on a solo climb like he did on five 8000 meter peaks in the past accompanied by Ali Sadpara on two (Lhotse and  Dhaulagiri). He describes him as a very good and technical climber. After reconnaissance in daylight, all four sprinted and jumped across the forbidding crevasse that had opened up after the fixing of rope by Nepalese; called ‘glacial crack’ by Tomaz Rotor. Time according to Sajid was 9-10 AM and the sun was warming up.

So how does one explain litany of ever compounding risks? Travelling light, they left everything including the only tent at Camp 3 occupied by 2 Nepali and one European climber. There were no sleeping bags. Only Juan Pablo was carrying some rope.

Mountaineers by temperament and nature of challenge live on the edge and take calculated risks. Sometimes it works and at others, it ends in tragedy. Maurice Wilson, George Mallory and Andrew Irvine tried but failed. Similarly, a long list of climbers took bigger risks and succeeded. It worked for Mingma G and Nepalese but not John Snorri and his partners.

Daring the edge is cognitive and cannot be measured. Emotionally and physiologically, the level of motivation of the four climbers was extremely high. They had shot up their adrenaline and conquered fear of unknown. They dared the edge. The mission of this four man team was ultimately ‘do or die’.

They had no plans of an emergency bivouac. Climb quickly and sprint to Camp 3 was their only option. Fraught with risks, the forbidding terrain and weather of K2 did not allow it to happen. It overtook them.

Valour accompanied by risks is part of an adventurer’s spirit. This time, the luck did not favour the brave.

As the clouds over this tragedy clear, let us salute these men whose luck ran out.  Let us leave the departed in Peace, and acknowledge the great things they did and endeavoured.