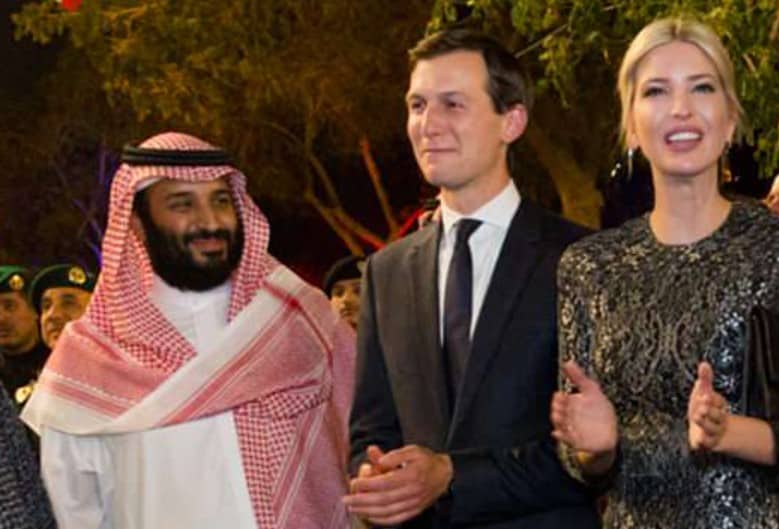 President Joe Biden’s decision not to punish Crown Prince Mohammed bin Salman despite the Friday release of a declassified intelligence report concluding that the Saudi leader approved the 2018 assassination of journalist Jamal Khashoggi outraged human rights and press freedom advocates within and beyond the United States.

The British papers (UK Daily Mail below) reported Kushner’s deal to target Khashoggi and others but this story was totally censored in the US and VT investigated for reporting it. (At orders of William Barr) 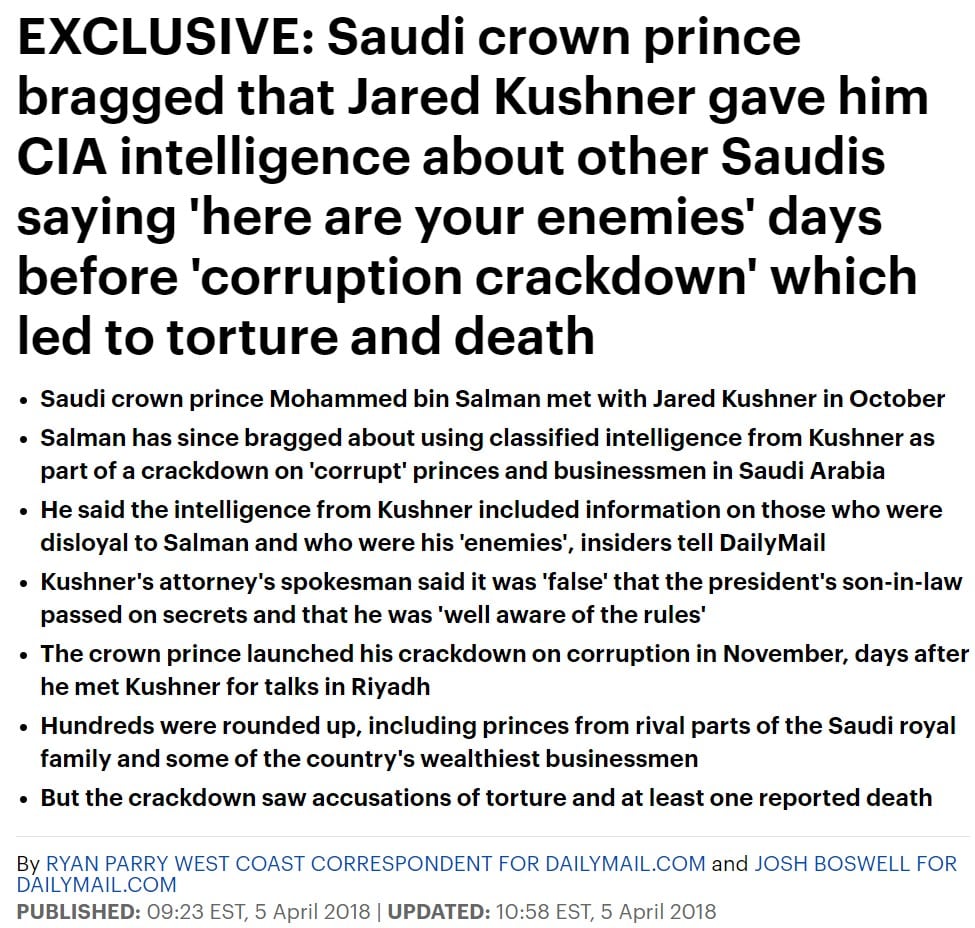 The ODNI has released its report on the killing of Khashoggi.

Citing senior administration officials, the New York Times reports that Biden decided “the price of directly penalizing Saudi Arabia’s crown prince… is too high” given “Saudi cooperation on counterterrorism and in confronting Iran,” though aides to the president added that the Saudi leader, also known as MBS, “would not be invited to the United States anytime soon.”

“Letting MBS get away with the murder of Jamal Khashoggi is absolutely abhorrent and horrific,” asserted writer Scott Neumyer.

A new State Department policy named the Khashoggi Ban will also be unveiled today, which will allow State to restrict and revoke visas to any individual believed to be involved in targeting/harassing/surveilling dissidents and journalists extraterritorially.

Justin Shilad, senior Middle East and North Africa researcher at the Committee to Protect Journalists, said in a statement that “the U.S. and its allies should sanction the crown prince and other royal court members to show the world that there are tangible consequences for assassinating journalists, no matter who you are.”

While the crown prince is, so far, going unpunished by the Biden administration, the report’s publication was followed by related actions at the State and Treasury departments:

Pro-democracy and human rights group are also responding to the long-awaited release of the intelligence report with calls for Biden to more broadly and significantly overhaul U.S.-Saudi relations.

Two sources confirm to me & @edokeefe that the call between King Salman & @POTUS happened earlier today. Saudi sources tell me the call between the 85 year old father to Crown Prince Mohammed bin Salman and Mr. Biden went well but we've yet to get a US readout. https://t.co/OjwVvfqoJA

“Candidate Biden rightfully called Saudi Arabia a pariah state, and the policies of now President Biden should reflect that,” said Medea Benjamin, cofounder of the group CodePink, just before the Biden administration published the assessment, which was largely based on work by the CIA and first reported on in 2018.

“We are encouraged by Biden’s recent announcement that the  U.S. will halt offensive weapons sales to the Saudis due to the devastating war in Yemen,” she said. “But in light of the Yemen war, Khashoggi’s brutal murder, and regime’s repression of human rights at home, Biden should go further in recalibrating the U.S.-Saudi alliance.”

“I hope his message is that we have to sanction MBS with the exact same sanction we imposed on the 17 other Saudi accomplices in this murder,” @sarahleah1, executive director of the Khashoggi-founded Democracy for the Arab World Now. https://t.co/qOwvuRKjpC

In a statement Friday, Council on American-Islamic Relations (CAIR) national executive director Nihad Awad also demanded that the Biden administration hold the crown prince and the kingdom “accountable for the brutal murder.”

“The U.S. government must continue to recalibrate its relations with Saudi Arabia—a government that violates the human rights of its own citizens and neighbors,” Awad said. “As a nation we must commit to not selling a dollar’s worth of weapons to Saudi Arabia, much less billions of advanced and deadly weaponry.”

Asked about the report and Biden’s approach to the Saudi regime—particularly compared with that of his predecessor—White House Press Secretary Jen Psaki told reporters earlier this week that the president intends to “recalibrate our engagement with Saudi Arabia and to have counterparts communicate with counterparts,” meaning that Biden speaks directly with King Salman while the crown prince communicates with the U.S. secretary of defense.

Psaki had also confirmed that the Office of the Director of National Intelligence would soon put out the report and Biden would have his first call with the Saudi king, though she declined to provide a timeline or any content details on either topic. That call occurred Thursday, ahead of the report’s release Friday.

U.S. intelligence officials determined that Khashoggi, a Saudi national and U.S. resident who wrote columns for the Washington Post and often criticized his home country’s leaders, was killed and dismembered by a Saudi hit team after entering the kingdom’s consulate in Istanbul, Turkey on October 2, 2018—and that his assassination was likely orchestrated by MBS. Khashoggi’s body was never found.

The report explains that the assessment that MBS approved the killing is based on “the crown prince’s control of decision-making in the kingdom, the direct involvement of a key adviser and members of Mohammed bin Salman’s protective detail in the operation, and the crown prince’s support for using violent measures to silence dissidents abroad, including Khashoggi.”

“Since 2017, the crown prince has had absolute control of the kingdom’s security and intelligence organizations,” the report notes, “making it highly unlikely that Saudi officials would have carried out an operation of this nature without the crown prince’s authorization.”

The CIA wasn’t alone in blaming the kingdom: A 2019 report from Agnès Callamard—U.N. special rapporteur on extrajudicial, summary, or arbitrary executions—said Khashoggi was “the victim of a deliberate, premeditated execution, an extrajudicial killing for which the state of Saudi Arabia is responsible under international human rights law” and it was “inconceivable that an operation of this scale could be implemented without the crown prince being aware, at a minimum, that some sort of mission of a criminal nature, directed at Mr. Khashoggi, was being launched.”

After initially denying Khashoggi’s murder, the Saudi regime claimed he was accidentally killed in a “rogue” extradition operation but denied that MBS was involved.

Five members of the Saudi kill squad were sentenced to death in December 2019, though Reuters notes they later “had their sentences commuted to 20 years in jail after being forgiven by Khashoggi’s family.” At the time of sentencing, Callamard called the outcome “the antithesis of justice” and said Khashoggi’s execution “demanded an investigation into the chain of command to identify the masterminds, as well as those who incited, allowed or turned a blind eye to the murder, such as the crown prince.”

Before Khashoggi was killed, he started Democracy for the Arab World Now (DAWN) in 2018. The group’s executive director, Sarah Leah Whitson, said Friday that “the DNI’s report today confirms what we have long known to be true: Mohammed bin Salman ordered the execution of Jamal Khashoggi.”

“President Biden should now fulfill his promise to hold MBS accountable for this murder,” Whitson continued, “by, at minimum, imposing the same sanctions on him as those imposed on his underlying culprits and ending the weapons transfers to Saudi Arabia that would be controlled by an unelected, brutal murderer.”

“The release of the DNI report is only a small part of the evidence we’re seeking from the U.S. government about the murder of Khashoggi, including regarding U.S. officials close to MBS who potentially facilitated a cover-up,” Whitson added.

Whitson echoed calls for Biden to freeze the crown prince’s personal and corporate assets in the United States, warning that “a mere travel ban would serve as less than a slap on the wrist, as MBS has already been effectively banned from coming to the U.S. given the lawsuits he faces and seeks to avoid.” She also called for sanctioning the airline Skyprime Aviation, which owned jets that were used by the kill squad, according to CNN reporting from earlier this week.

She further declared that “no government can justify another dollar in arms sales to the Saudi government with the knowledge that they will be controlled by a reckless, sadistic murderer… America’s own laws demand nothing less than ending sales and transfers of the world’s most dangerous weapons to Saudi Arabia as long as MBS remains its defense minister and de facto ruler.”

Since the campaign trail, Biden had faced pressure from human rights activists, defenders of press freedom, critics of the Saudi regime, and Hatice Cengiz—Khashoggi’s fiancée—to release the report and be tougher on the kingdom’s leaders than former President Donald Trump and key members of his administration.

Cengiz is featured in The Dissident, a recent documentary on Khashoggi’s life and death. According to reviewer Nick Allen, the film also examines how the crown prince, “who is directly accused in the film of being involved with the murder, has fostered a society that relies on silencing its critics, and manipulating people of power.”