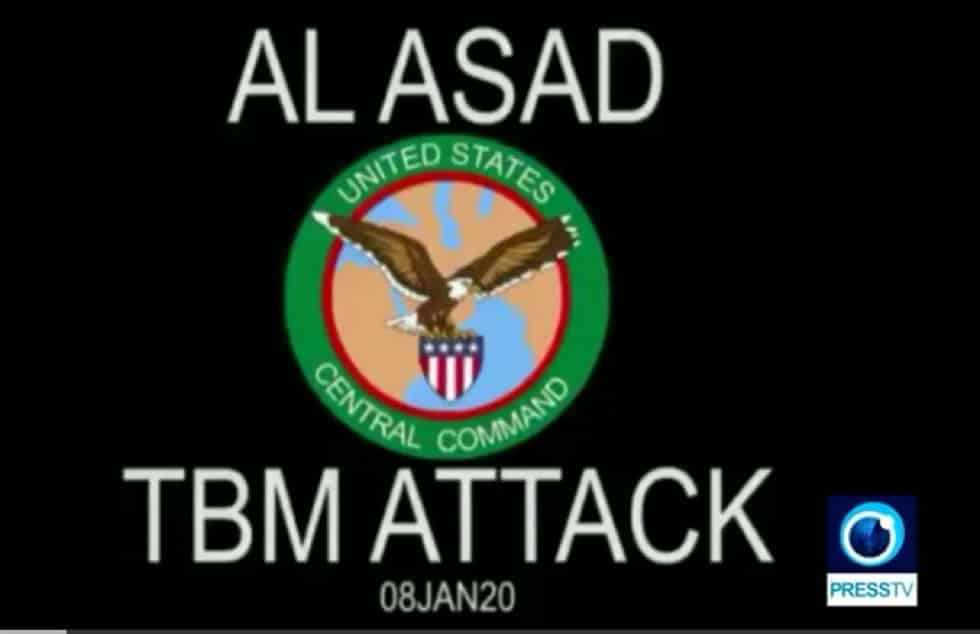 With a strategy that seems evidently projected towards the construction of propaganda against Iran, the US Army has declassified the video of the attack that took place in January 2020 on the American base of Al Asad in Iraq. Former US President Donald Trump downplayed the damage caused by Iranian hyper-tech ballistic missiles in response to the US Air Force drone killing of General Qasem Soleimani. Journalistic investigations showed instead that there were at least 100 injured American soldiers with severe brain damage urgently transported to the US Air Force base in Germany.

Two weeks later Micheal D’Andrea, the CIA chief operating officer in the Middle East who planned the execution of Soleimani, was reportedly killed in the US Air Force plane that crashed, but more likely shot down, in Afghanustan.

After the bombing of the Iranian militias in Syria decided by President Joe Biden in response to the missiles launched against the Erbil airport and the nearby American base and attributed to paramilitary formations of pro-Iranian Hezbollah, here is a new move in military geopolitics that he wants to convey to the American people the “bad” image of Tehran.

This comes after the Iranian government refused to return to the Nuclear Weapons Non-Proliferation Agreement unless the US first lifted the asphyxiating sanctions imposed by Washington which first, during the Trump administration, withdrew from the JCPoA agreement. (Joint Comprehensive Plan of Action) on pressure from Israel, the only country in the Middle East to have multiple nuclear warheads that recently built a new nuclear factory.

In response to the killing of Soleimani, commander of the Force Quds department of the Guards Corps of the Islamic Revolution (Pasdaran), Iran had increased the enrichment of uranium in the underground and almost impenetrable base of Qom. Not far from the mosque where the red flag of revenge was raised. Below the whole report by Iranian Press TV. This represents a further cause for concern in view of Pope Francis’ upcoming trip to Iraq scheduled for this weekend.

The US Central Command (CENTCOM) has declassified the aerial surveillance footage of Al-Assad Air Base in Iraq during Iran’s 2020 ballistic missile attacks on that facility in retaliation for the US assassination of top Iranian commander Lt. General Qassem Soleimani.

The never-before-seen footage, shot by a drone orbiting overhead at the time, shows six ballistic missiles hitting the base.

The CENTCOM, which is the top command overseeing the US military activities in the Middle East, provided the video first to CBS News’ “60 Minutes” for a segment that aired this past weekend.

The video starts by identifying five ramps at Al-Assad – named Bravo, Charlie, Foxtrot, Valley, and Voodoo – and the number of aircraft positioned at the time of the attack.

The on-screen notes also indicate that there are usually 10 aircraft on the flight-line and that 51 fixed-wing aircraft and helicopters had evacuated the base ahead of the strikes.

The fourth missile strikes the Voodoo ramp, hitting more clamshell hangars, as well as a fuel bladder. The last two missiles seen in the footage strike the Charlie and Valley ramps, hitting a rescue operations center, as well as maintenance facilities, a gym, and a dining hall.

In January 2020, Iran launched the largest ballistic missile attack ever against Americans. 60 Minutes has obtained unreleased footage of the incoming warheads.

It’s not clear what type of drone filmed the video in question, but it is known that a number of US Army MQ-1C Gray Eagles were airborne at the time and that some were kept on station due to fears that a complex ground attack could follow the missile barrage, according to The Drive website.

However, the strikes damaged fiber optic lines connecting ground control stations at Al-Assad to satellite terminals, cutting them off from the unmanned aircraft overhead. This may also explain, in part, why only six of the missile impacts are seen in the footage.

US Army Major Alan Johnson, who was at the base during the incident, told “60 Minutes” that intelligence had indicated Iran was preparing to fire as many as 27 missiles at Al-Assad.

However, then-US Secretary of Defense Mark Esper had said following the January 2020 attack that 11 Qiam 1s had hit Al-Assad, in total.